Hard Not to Love Finds No 'Peers' in Santa Monica 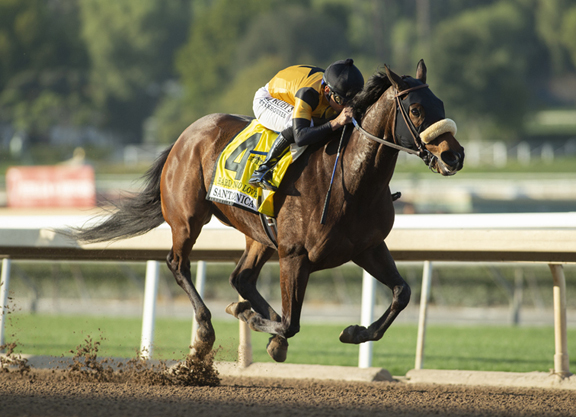 Hard Not to Love | Benoit Photo

'TDN Rising Star' Hard Not to Love was last seen blowing away her competition at 11-1 odds in the GI La Brea S. over this same track and trip Dec. 28, but she likely won't be going off at double digits for awhile, especially after her latest performance. Reined back to last by Mike Smith in a compact field of five, the bay sat perched out wide and within striking distance as the rest of her foes scrambled for position through a :23.04 opening quarter. The favorite began her sweeping move into a :45.81 half, and kicked away under a hands-and-heels ride to win with authority.

“I gotta take my hat off to [trainer] John Shirreffs and everybody, the groom and the gallop girl that gets on her. She is a lot of work and they have done a lot to get her here and it is paying off,” Smith said. “She gets anxious and the fans are starting to know her. They show her a lot of respect and they get quiet for her. She just gets anxiety because she can't see everything, but she is such a sweetheart. The best part of it all is once we get her in the gate and get her running.”

Smith added, “I told John, that I think she wants two turns I hope I'm right. She is doing so well doing what she is doing and you can't ask her to do anymore but it's time to probably go around the second turn.”

A three-length front-running victoress on debut here almost exactly a year ago, Hard Not to Love–who is missing her left eye–doubled up over Lady Ninja (Majesticperfection) in an April optional claimer. The one blemish on her record so far was a third-place run in the May 4 Angels Flight S. after burning herself out early, but she resurfaced in another optional claimer here Oct. 25 and got the job done from off the pace first time under Smith. She and her Hall of Fame pilot further perfected her new late-running style in the La Brea.

“She's getting better and better,” Shirreffs said. “She's getting into those repeat performances. The stewards allowed us to break from the post parade when she came out of the tunnel. Her groom, Martin Lopez, walked her around the [clubhouse] turn and she stayed calm. She never breaks, but she reacts very quickly. Mike said he was waiting for her to relax and then he put her into the race. I love Mike, we go back a long way and we think a lot alike. He's such a horseman, for him, it's all about the horse. That's above winning or losing, it's always about the horse. It looked like this was her best race. We're thinking about going into the [Mar. 14 GI] Beholder Mile. I think as long as she can [relax], with her style of running, it shouldn't be a problem.”

Pedigree Notes:
Ontario-based breeder David Anderson paid $180,000 for the winner's dam, who boasted a 104 Beyer Speed Figure top herself, at the 2011 Keeneland January sale. Her first foal was Solemn Tribute (Medaglia d'Oro), a $385,000 KEESEP yearling who would go on to become a stakes winner and graded stakes-placed. Three seasons later came Wonder Gadot (Medaglia d'Oro), who Anderson sold for $80,000 as a KEESEP yearling. She'd eventually be named Canada's champion 2-year-old filly in 2017, and champion 3-year-old filly and Horse of the Year in 2018 after annexing the Queen's Plate, before bringing $2 million the 2019 Fasig-Tipton November sale.

Anderson sold Loving Vindication's unraced Bodemeister 3-year-old for $300,000 at the 2018 Fasig-Tipton October sale, and then bought back the mare for $1.45 million in that same sales ring that November. Loving Vindication, a daughter of GSW Chimichurri (Elusive Quality), produced a Nyquist filly in 2018 and Curlin colt last April. She was bred back to Medaglia d'Oro.