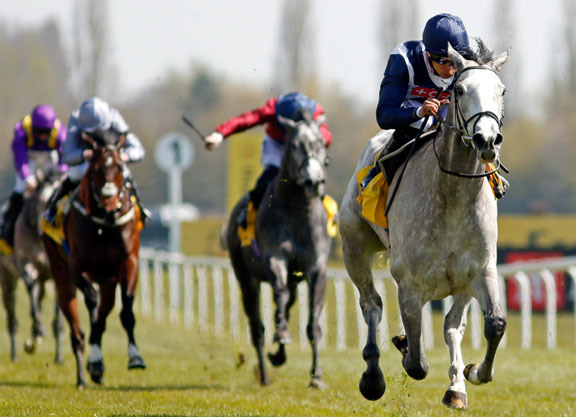 Trainer Richard Hannon said he and the team behind Rockcliffe Stud's homebred 'TDN Rising Star' Snow Lantern (GB) (Frankel {GB}) opted to bypass Sunday's G1 1000 Guineas with a view towards the “bigger picture,” which could include engagements in races like the G1 Prix de Diane, G1 Coronation S., G1 Irish 1000 Guineas and G1 Falmouth S. as well as a 4-year-old campaign. Snow Lantern became the subject of Guineas talk immediately after breaking her maiden in eye-catching fashion at Newbury on Apr. 18.

“It was a team decision,” said Hannon of the call to skip Newmarket this weekend. “She's by a Guineas [winner] out of a Guineas winner [Sky Lantern], so the 1000 Guineas looked her race, but you've got to look at the bigger picture. She has been lightly raced up to now. She's a very heavy filly, and they are looking to keep her as a 4-year-old. They don't want to throw her into the deep end right now. I hold her in the highest regard–I think she could be even better than her mum.”

Hannon, who also trained Sky Lantern, said Snow Lantern can be “a bit of a madam.”

“She's a bit difficult; she can be a bit keen and can be a bit of a madam. But you don't mind that when they have the talent and ability she has. I've never known a horse look so much like her mum, so much so I got Hughesie [former jockey Richard Hughes, who rode Sky Lantern] to sit on her when he was down one morning. He didn't feel this filly had the same sort of speed, but I think she had an off-day.

“I think she's a miler personally. She won very well at Newbury, and I think she's very good. Although it's a shame to miss the Guineas, it will give us the opportunity to look at big targets in the summer.”