Handal on the Rise in New York 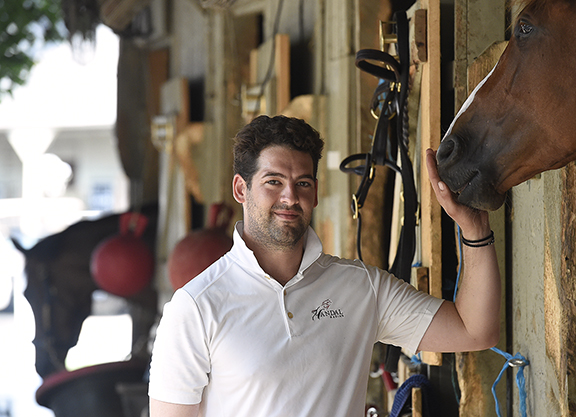 SARATOGA SPRINGS, NY–A just 29, trainer Ray Handal has come a long way since attending the races with his father as child at their home track of Caymanas Park in Jamaica. He's up to almost 30 head, and is wrapping up a very strong Saratoga meet that has so far seen his 18 starters win four times (22%) with a particularly stellar in-the-money rate of 61%. Among his wins at the Spa was a victory in last Friday's Fleet Indian S. with New York-bred sophomore filly English Soul (English Channel).

“My dad and I used to go to the racetrack starting when I was a little kid. He loved betting the ponies and he'd take me out at a young age and teach me how to read the Racing Form,” Handal said earlier this week after climbing off his last trainee for the morning. “He actually has a degenerative disease, retinis pigmentosa, so as his eyesight got progressively worse, he taught me how to read the form and we loved doing that. I just love the challenge of handicapping, and then later fell in love with the horses.”

Handal and his family moved to Ft. Lauderdale, FL when he was 11, and he continued to frequent the races at Calder Race Course and Gulfstream Park. He started walking hots at Calder in his teens, and eventually found his way up to Colonial Downs while working for trainer Larry Bates. From there a spot opened up with Hall of Famer Jonathan Sheppard up in Saratoga, and that's when Handal's racing education reached another level.

“We had to stop at Jonathan Sheppard's farm in Pennsylvania on the way up to pick up some horses, but there was some mix-up so we had to stay overnight,” Handal recalled. “I got there and I was just amazed. It was unlike anywhere I had ever seen despite going to the racetrack and watching horses train forever. I wanted to just stay there and learn about it, so on a whim I went to Jonathan and asked to stay there. I told him I wanted to learn how to ride. He asked me how much I weighed–135 lbs.–and he said that was perfect. So he brought me on, and I worked my tail off there. You get started at 6:30 a.m., work all day–train them, ride them, bathe them yourself. It builds a lot of character, and you learn so much–it was like going to school. I just soaked it all in.”

Handal's next boss was another revered Midlantic horseman in Michael Matz.

“That's where I really polished up a lot of my horsemanship skills and took it to another level,” Handal said. “I worked as a foreman and just helped with whatever was needed. I soaked a lot in; I'd go in with the vets every time they'd come in the barn. It was like finishing school for me. Michael's an amazing horseman just from the ground up–he knows all aspects of the game.”

Still just 18 at that point, Handal joined Kenny McPeek's team in a role he describes as almost an assistant. He had the privilege of riding some of McPeek's top runners at the time, including Grade I winner Noble's Promise and SW/GISP Beautician.

“Working for Kenny, you really learn the business aspect of it. That's where I got my training on how to run a business. It was a fun ride–he took me to a bunch of different places, including Royal Ascot. I'd go to Palm Meadows in the winter, Saratoga in the summer and Keeneland in the spring and fall, so it was awesome.”

It had always been Handal's dream to study under Tony Dutrow, so one summer, he made his pitch.

“I was just always fascinated by his training style,” Handal said of Dutrow. “I'd seen him train his horses since I was a little kid, and I always wanted to be his assistant before I started training on my own. So I sat down with him one summer at Saratoga, told him how badly I wanted to work for him, and he told me, 'You're way too young. You need at least five more years.' So, I'd see him every summer and tell him, 'I'm ready when you want me to jump on the team.'”

Eventually Dutrow, in need of an assistant to oversee things at Aqueduct, reached out to Handal. Dutrow gave him a lot of responsibility, and therefore a taste of what being out on one's own is like.

“Tony knew that I wanted to train on my own someday, so he always put me in that spot,” Handal said. “He'd say, 'Here's the feed guy's number–you keep the feed stocked up' or 'Here's the racing office number–you call and make entries.' He'd call me and ask if there was anything to claim. It was my job to go through the form and let him know if there was anything we had to look at.”

While with Dutrow, Handal also developed a relationship with the owner who would eventually give him his first horses–Andy Cohen of Sunrise Stables. Cohen had sent Dutrow four horses by his freshman stallion Frost Giant, and Dutrow and Handal did very well with that group, which included GI Kentucky Derby starter Giant Finish. Frost Giant broke the record for progeny earnings by a New York-based freshman in 2012.

“Andy always said, 'When you're ready, just let me know and we'll definitely support you and send you some horses.' So, a couple years down the line, Tony got to the point where he kind of wanted to consolidate his strings and see every horse train, so when he decided to shut down his Aqueduct string, I wasn't thrilled about leaving. Not that I didn't like Fair Hill, but I wanted to be on the racetrack and it's not the racetrack, so as much as I love Tony, it was just time for me to move on.”

After one last job as an assistant, this time for Tom Morley, Handal went out on his own with a pair of horses given to him by Cohen. His first starter, Wundahowigothere (Big Brown), a daughter of Grade I winner Wonder Lady Anne L, ran a strong third at Aqueduct on Nov. 19, 2014. Two days later, Handal's second starter Chase the Giant (Frost Giant) blew up the tote at 65-1 as a main-track-only entrant in a maiden special weight.

“Things just kind of sparked from there,” Handal said. “I got a lot of attention for winning at 65-1. I didn't win another race for like six months after [Wundahowigothere] won [in January of 2015], but it was a pretty cool ride.”

Things moved slowly for Handal for a while until he reached out to Mike Piazza of Zilla Stables. Piazza offered him a chance to get more involved in the claiming game.

“I needed to start claiming more–I needed to do something to get the numbers up and get a spark going,” Handal said. “So I reached out to Mike Piazza, and he offered me a no-expense claim model, where they pay for the claim, and I was responsible for the additional expenses. It isn't always the best model for a young trainer, but I knew it was either that or go out of business at that point, so I had nothing to lose. We started claiming, and everything started winning or running second. They rattled off some wins and that got people's attention. From there it snowballed. When you get the win percentage up and start winning races, the phone starts ringing and we went from there. Now we're up to the level where I'm claiming on the high end, as well as going to the sales and buying young horses, which is ultimately what I want to do.”

Handal's most successful young sales horse to date is one he conditions for Zilla, the aforementioned English Soul. A $55,000 Fasig-Tipton Midlantic juvenile last May, the New York-bred took the East View S. in January and fended off all comers Aug. 24 to narrowly annex the $200,000 Fleet Indian. With earnings of $287,634 from a record of 8-4-2-1, the chestnut will likely make her next start in the GIII Charles Town Oaks going a two-turn seven furlongs Sept. 22.

“They haven't seen the best of this filly,” Handal said. “I think she's going to be a really good horse–better than just a nice New York-bred stakes horse.”

Handal, who works the sales with Oracle Bloodstock's Conor Foley and Jim Hatchett, was involved in three auction purchases of horses who are currently sophomores–all have won. He made nine purchases this year.

Of his current crop of babies, Handal may be most excited about unraced filly I'llhandalthecash (Point of Entry). Signed for at $150,000 by Oracle on behalf of Dark Horse Stable after breezing at OBS April in :10 flat, she is expected to debut early in the Belmont fall meet.

“She's got all the right parts; she's very racey,” Handal said. “She goes out there and breezes by herself, breezes in company. We're excited to see her run. I'd love to try and win with her first out to get her into stakes company while there's still grass racing.”

Handal, who says the individualized attention he provides, the benefits that come from getting on his horses in the mornings, and the culture and camaraderie he instills among his team have been his keys to success, is looking forward to continuing to add to his stable in the upcoming sales season. He expects his budget to be at least double of what it was this past year.

“Just getting nicer quality stock,” Handal said when asked of his goals. “Everyone wants to win a Grade I, or the Derby or a Breeders' Cup race. I know all that stuff will come. My main goal right now is focusing on the sales and buying younger horses and showing what we can really do with an extended budget and some really good horses. Not only can I claim and be successful, but I can buy young horses and be successful as well.”