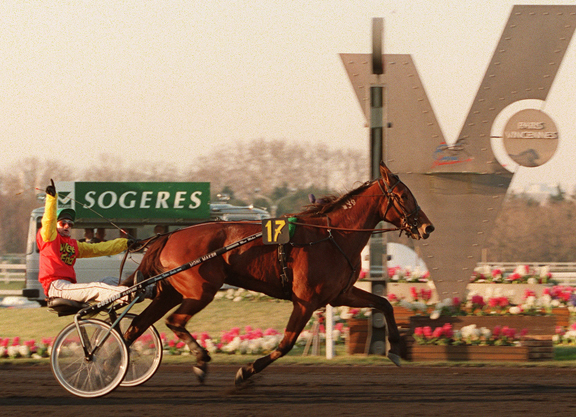 The team behind the world's richest female Standardbred is taking on the Thoroughbred racing world. | Getty Images

Just last week Lindy Farms, the Thoroughbred racing partnership of Philip Antonacci and Jimmy Takter, which was announced in September last year, had its first winner. They bring to the sport a novel approach to training and a dedication to keeping their horses relaxed and happy with a regiment that includes plenty of turnout in company with other horses.

Now, as they head back north to Monmouth for the summer, they are adding Hall of Famer Julie Krone to their team.

Krone is scheduled to arrive at Monmouth at the end of April.

“I'm very grateful to both Philip and Jimmy for the opportunity and am looking forward to getting to know the horses,” she said.

Antonacci, a graduate of the University of Pennsylvania and the Darley Flying Start program, grew up in a family that bred and raced Standardbreds at the highest level. Their renowned stable included the trotter Moni Maker, a mare trained by Takter, that retired as the richest female Standardbred in history, with $5,589,256 in lifetime earnings. As part of it's 1,000-acre breeding and training operation in Connecticut, the Antonacci family began dabbling in Thoroughbreds. It has long been the younger Antonacci's desire to be a trainer.

Takter, an international legend in the Standardbred business, began training for Antonacci's family in 1984. Retiring as a Standardbred trainer in 2016, he was looking for new challenges in life and now, as an adviser to Antonacci, Takter is applying his 40 years of conditioning experience and success with Standardbreds to Thoroughbreds.

“Simply put, Jimmy Takter is one of the great horsemen in the world,” Antonacci told the TDN in September, 2020. “He has a completely unique connection with the horses and his stats speak for themselves. Four Hambletonians, six Hambletonian Oaks and 34 Breeders Crowns, those are unfathomable statistics. He is one of those guys who, even though he was so successful every year, was always looking to make changes or modify something that would give him an advantage moving forward. He is a fast learner and is someone who can adapt.”

“We try to do things a little bit different without trying to reinvent the wheel,” Antonacci said of the new Lindy Farms partnership. “Obviously, everybody's been doing their own individual things for years and they are very successful at the highest level. So, we're just trying to find what works for us. Jimmy is a big believer, as am I, in interval training. We're trying to get horses to build a high cardio rate, and then recover, and then build back up again without putting too much stress on them.”

He continued, “So with our babies, we do interval training. It comes with plenty of rest, and not going too fast and letting them recover. So far, they've all taken to training very well and enjoy it. Everybody seems to be thriving off of it.  After every training they seem to grow and muscle up more.”

Added Takter, “The reason why I like interval training is that you're building up the body a little stronger. I'd like to try to get a little bit more bone on the horses and get a little bit more solid foundation on the base. If they get a few months of that, then I think they can carry speed longer and hopefully stay sounder.”

In between the days of training, their pupils receive days of rest and turn out.

“These babies have their whole life to be stressed out in a racehorse environment,” said Antonacci. “We don't really want to replicate that type of environment in the early process as they're growing and developing. So, they spend plenty of time out in the paddock together. We pair them up in twos and they spend their off days, all day nearly, turned out in the paddock, enjoying themselves and being horses.”

With their first winter in Florida coming to an end, Antonacci and Takter have been able to see the fruits of their efforts, both in terms of the team they are building and their horses in training. Currently, there are 15 horses in the stable–eight of which are well-bred 2-year-olds.

“It's challenging,” Takter admitted. “It is way different than training a Standardbred. You never know what you will be facing every day, but I think for the last month I've been really, really happy with how things can come together. I think we finally found the right path, what we want to do with these horses. We went in very easy and very kind to them. Now the last month here they're coming along perfectly.”

“You know, with any new business or new team forming there is going to be ups and downs,” said Antonacci. “It's been a lot more ups than downs and I'm very happy with the people I have around me. The horses are doing great, so it's very exciting. Our team is really strong and everybody looks forward to coming to work every day. We're very happy with the horses and how they're progressing.”

“Our horse Advanced Strategy (Karakontie {Jpn}), who we acquired off Jim Jerkens, raced at Gulfstream [in first start for Lindy Farms]. He finished third. He raced very well. I give a lot of credit to Jim for sending him in such great order. He's a really honest horse and will be a fun New York-bred to have this summer to race around Belmont and Saratoga.”

In his next start last Saturday, the 4-year-old sailed to victory in an optional claimer at Gulfstream, giving Antonacci his first trip to the winner's circle as a trainer.

Krone's connection to the Antonacci family and Takter started with a big win. In 2000, when it came time to retire Moni Maker, Takter wanted to do it in an extra special way.

“When we had Moni Maker, the richest female Standardbred ever, she won a $500,000 race in her final start, but we wanted to do something a little bit more, you know, a little special for her when she did retire,” said Takter. “Julie Krone had just come off retirement and was getting inducted in the Hall of Fame. It was a nice tribute to bring a famous woman like her to ride Moni Maker in what we call Monte. It's riding on the saddle at the trot. Then, of course, she broke the world record. Philip kept in contact with her and about three weeks ago, we decided we would go to Monmouth Park and Julie said, `I want to be with you guys.' So I look forward to that day. She's such a great horsewoman and we can learn a lot from her.”

“Julie's got so much knowledge and she's really just a wealth of information,” said Antonacci. “I'm very, very excited to bring her along. And I think she's going to contribute to the team greatly. And, you know, she's got such a winning personality and is the type of person that you love to have around the farm. She makes everybody feel good and makes everybody feel happy.”