Hall of Fame Trainer Gary Jones Passes Away at 76 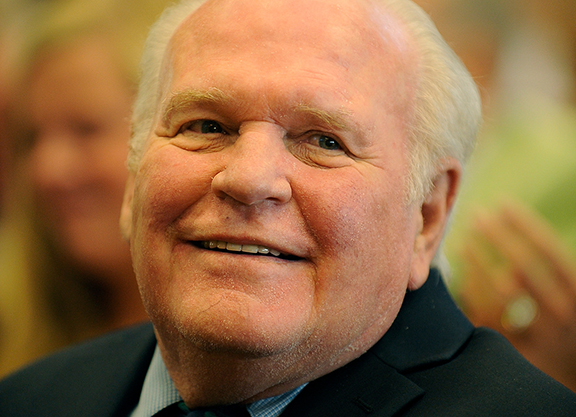 Trainer Gary Jones, who was inducted into the United States Racing Hall of Fame in 2014, passed away Sunday at his home in Del Mar, California. His son, trainer Marty Jones, said his father had been in hospice care and died of natural causes. He was 76.

“He was an amazing person, first and foremost,” his son said. “For me, that's the most important thing. On top of that, he was a great horse trainer.”

Gary Jones was the son of longtime California-based trainer Farrell Jones and took over his father's stable upon his retirement in 1975. He picked right up where his father left off, winning with the first horse he ever saddled, King Wako, on Dec. 26, 1975 at Santa Anita, and quickly established himself as one of the leading trainers in Southern California. In 1976, he had 47 winners at the Santa Anita meet, breaking the record that had been set by his father. It was the first of 15 meet titles he would win.

Over the years, Jones continued to pile up stakes wins, many of them with fellow Hall of Famer Chris McCarron aboard.

“Gary was family,” McCarron said. “He was the first major trainer in Southern California to give me a real shot. I developed a relationship more quickly with Gary than any other trainer out there and I will be forever grateful for his support. I was tickled to death when he got inducted into the Hall of Fame years ago. I am so glad it happened before he passed away. As the years went on, we became incredibly close and our families got very close. I am very saddened by this loss.”

Though Jones won stakes with numerous horses, he will be best remembered for two–Turkoman and Best Pal.

Turkoman enjoyed his best season in 1986, when he was named Champion Older Male. He won the GI Widener H., the GII Oaklawn H., the GI Marlboro Cup H. and was second in both the GI Jockey Club Gold Cup and the GI Breeders' Cup Classic.

“Turkoman did not care about running,” Jones told the Del Mar Times in 2014. “I had to breeze him an eighth of a mile the morning of a race to let him know he was going to run.”

After starting his career for Ian Jory, Best Pal was turned over to Jones in 1991, midway through his 3-year-old season. After a win in the GII Swaps S., Best Pal, owned by John C. Mabee, won the inaugural running of the Pacific Classic.

“Best Pal had a limited amount of ability, but he was all desire. He never wanted to lose–a classy son of a gun. And he was a character,” Jones added.

Though just 52 at the time, Jones retired in 1996 after suffering from heart problems.

“He had some heart conditions he was dealing with at the time and made that decision along with my mom,” Marty Jones said. “He felt like it was time to turn the page.”

The younger Jones took over his father's stable after he retired.

It was not until 18 years later that Jones made the Hall of Fame.

“I was flabbergasted when they told me,” he said in 2014 after learning that he was to be inducted into the Hall of Fame. “I had been passed over a few times already, and I had decided I probably wouldn't be making it.”

In addition to his son Marty, Jones is survived by his wife, Joan, and another son, David, who is an attorney.