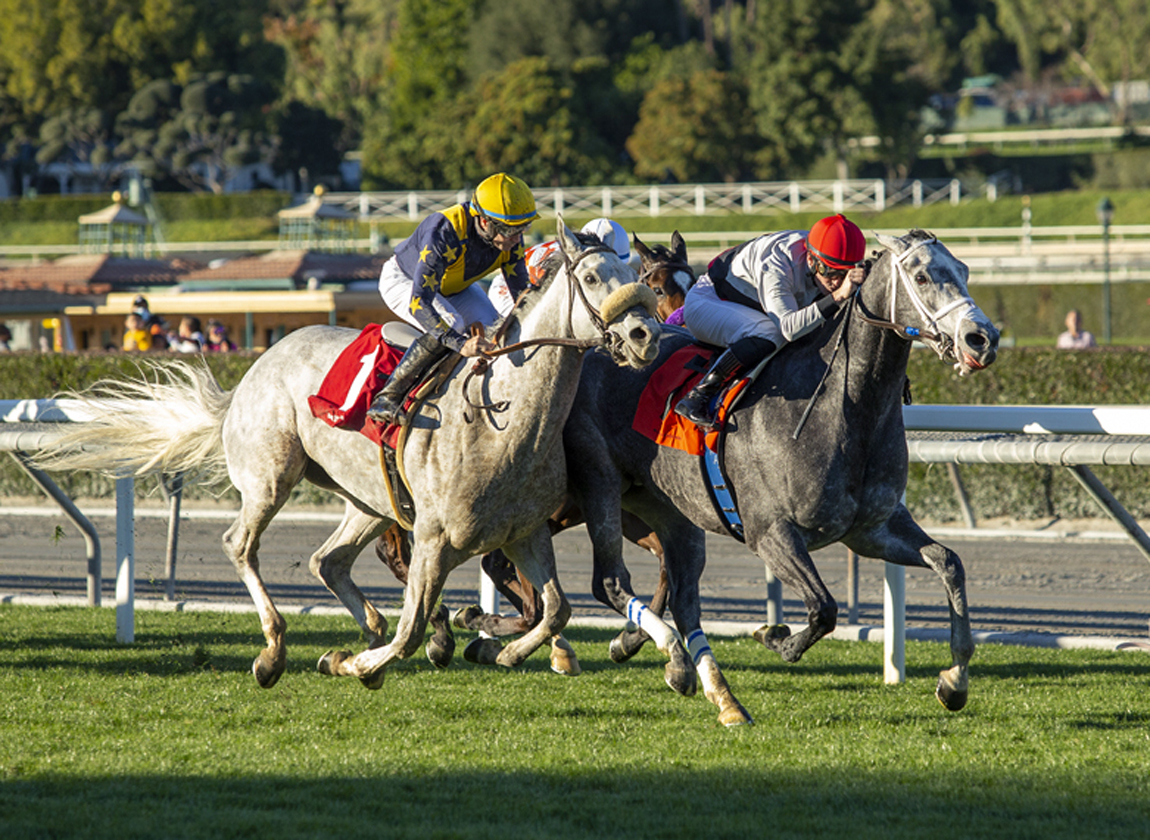 Jason Hall, owner, breeder and bloodstock agent, was represented by his first graded stakes win as an owner when Zero Tolerance (Mizzen Mast) captured the GIII Las Cienegas S. at Santa Anita Sunday. The Idaho native will look for that success to continue in the sales ring when he offers three short yearlings through the Small Batch Sales consignment Wednesday at the Keeneland January Horses of All Ages Sale.

“I actually didn't make it [to Santa Anita] because I needed to head to Keeneland,” Hall said Monday. “And I'm just a tiny bit superstitious and it seems like she runs really well when we're not there. So I figured it was a win-win for me to get on a plane and head to Lexington.”

Hall continued, “I have had a handful of other graded stakes wins as a breeder, but as an owner this was a first. It was incredible. I was with my wife, Silvia, and she's a big part of the program. So for her and me to be able to share that together, it was really, really nice. It was something I'll never forget.”

Zero Tolerance is out of Torreadora (El Prado {Ire}), a mare Hall purchased for $8,200 at the 2017 Keeneland January sale. The Sam-Son Farm-bred mare was not in foal at the sale and that may have helped the agent land a bargain.

“The market is really biased against open mares and I am willing to take an open mare if they look the part,” Hall explained. “This mare could really run, I watched quite a few of her videos going into the sale. She had really nice mechanics. And of course she is from that heralded Sam-Son family of No Class and Smart Strike and Dance Smartly. And she's by one of the all-time greats in El Prado.”

Hall still has a piece of the family. He purchased the mare's now 2-year-old filly Domerelle (Munnings) for $75,000 at the 2020 Keeneland November sale.

“We sold the mare right after El Tormenta won the Grade II and of course he went on to win the Woodbine Mile,” Hall said. “The guy who bought her from me put the Munnings filly in Keeneland November and I just mentioned her to a client friend of mine in Orlando. We joined forces and got her bought. She was bought strictly to race.”

Hall has earned a reputation as an agent who buys promising mares on a budget.

“I came from the Joe Estes school where performance trumps pedigree,” Hall said, referring to the former Blood-Horse editor. “That's not to say I don't want as much pedigree as I can afford, but I would much prefer my bloodstock dollars go toward a mare with a race record than say an unraced or unplaced mare with a fancy pedigree. I just really lean in that direction.”

Hall admitted that competition for those types of mares has increased in recent years.

“They used to be very easy to come by back 10 or 15 years ago,” he said. “You could find a mare who had some performance that didn't really show up on a catalogue page, but I think people are starting to wise up and purchase mares with more performance, so it has made it a little more difficult in recent years.”

Hall owns around 30 mares, mostly in partnerships, and has about 20 horses in training.

“Generally, we sell whenever we can,” Hall said. “This is my livelihood, so whenever I can take some money off the table, I will. But that being said, the market has become so finicky in recent years that it's really hard to get what you think some horses are worth. So with those horses, we go on to the races.”

He continued, “Zero Tolerance is a really good example of that. Somebody in Kentucky offered me $100,000 for her as a yearling. I thought she was worth more and they wanted me to ship the horse back there just so they could look at her and the deal fell through obviously.”

Hall will be represented as co-breeder of three yearlings Wednesday at Keeneland. Leading off the trio is a colt by Munnings out of stakes-placed Heavens Stairway (Decarchy) (hip 575).

“We've got a Munnings colt out of a really talented stakes mare,” Hall said of the yearling. “This is her second foal. He is a big, strong, strapping horse. I think everyone is going to be drawn to him. And of course, they don't get any hotter than Munnings.”

Hip 643 is by the late Malibu Moon out of Meet and Greet (Tribal Rule), who is a half-sister to graded winner Bourbon Resolution (New Year's Day) and from the family of graded winners Salute the Sarge and Chelokee.

“We have a Malibu Moon out of an impeccable female family,” Hall said. “At one point, 50% of everything in the family had graded stakes credentials. Malibu Moon is a little bit of a twilight sire. Now that he has passed, the commercial market isn't paying quite as much attention to him, but the quality is still there.”

“I am playing the second-year sire angle with our Flameaway filly out of a Mizzen Mast mare,” Hall said. “She is a big, stretchy thing with some nice substance. She looks like she'll be very versatile.”

While heading to Keeneland as a seller, Hall is always on the lookout for something to buy.

“I am always looking,” he said. “I don't have to buy a horse at this sale, but if the right mare with the right racing credentials falls in my lap, we will certainly swing. I also have a few buddies who are interested in a short yearling that we would put in training in the fall and let it tell us what it is capable of. If there is money to be made with him in the sale, fine, if not we go to the races.”

Hall has been a racing fan since his childhood in Idaho.

“From an early age, my dad raced at the little bush tracks in Idaho,” he recalled. “One day my grandfather brought me some copies of the old Thoroughbred Record when it was still in newspaper form. I was hooked from that point on. I've never stopped.”

“I do a little of everything,” Hall said. “Like all of us, we have our strengths and weaknesses. For me, I think my strength is finding value in mares and planning matings. I bought some really good yearlings that we race. Pinhooking weanlings to yearlings really isn't my thing. I would say I gravitate more to the breeding end of the game.”