Half To Modern Games A New Rising Star 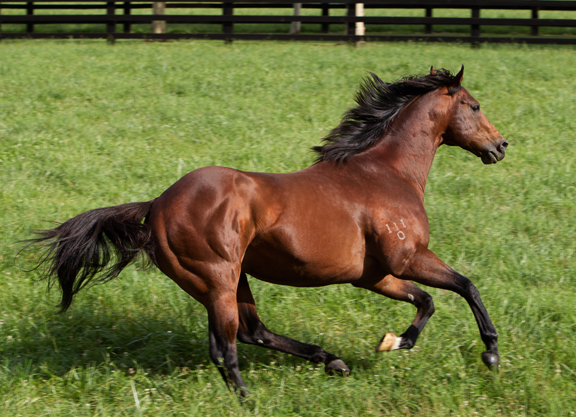 A day before her GI Breeders' Cup Juvenile Turf-winning half-brother Modern Games (Ire) (Dubawi {Ire}) is set to tackle the G1 Emirates Poule d'Essai des Poulains, the juvenile Mawj (Ire) (Exceed and Excel {Aus}) did her own bit for family pride when powering to TDN Rising Star status at Newmarket. Sent off the outsider of three Godolphin runners in the six-furlong Denbury Homes British EBF Fillies' Novice S. at 12-1, the Saeed bin Suroor-trained homebred tracked the leaders travelling strongly under Ray Dawson. Launched on the stand's rail to lead passing the furlong pole, the April-foaled bay strode clear for an emphatic 4 3/4-length verdict over Believing (Ire) (Mehmas {Ire}), with Amo Racing's 400,000gns Tattersalls Craven Breeze Up graduate Distinguished Lady (Fr) (Zoustar {Aus}) three lengths away in third. Mawj, who was winning the race that launched TDN Rising Star Cachet (Ire) (Aclaim {Ire}) 12 months ago, becomes the fourth in that bracket by her sire.

This looked a contest of significant note, with several fillies held in high regard including the heavily-supported 5-2 favourite Inverlochy (Fr) (Oasis Dream {GB}) from the Simon and Ed Crisford set-up and the Charlie Appleby-trained Fairy Cross (Ire) (Dubawi {Ire}), a daughter of Devonshire (Ire) (Fast Company {Ire}), who were fourth and fifth respectively and spreadeagled by the winner. Saeed Bin Suroor, who was not at the track, said, “She is a nice filly and she has always shown plenty of speed at home. She will improve for this and we will look for a better class race now. She will probably go to the [G3] Albany. Hopefully she is a filly with a nice future.” Ray Dawson added, “She is very nice. They had not pushed too many buttons at home, so today was the test but she has passed that with flying colours. Once that gap opened up near the rail, she was gone. She has got plenty of class.”