Half Sis to Constitution First to Seven Figs at KEESEP 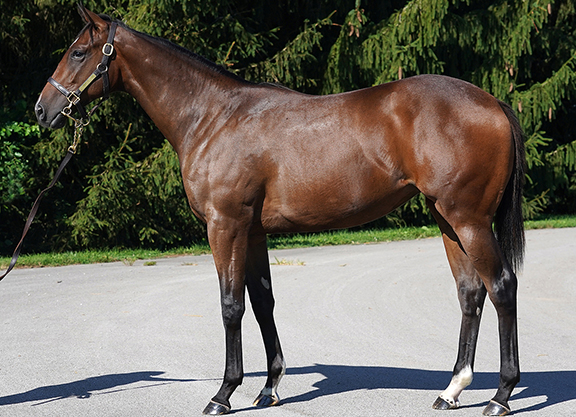 A Medaglia d'Oro half-sister to leading second-crop sire and MGISW Constitution (Tapit) was the first to reach the seven-figure threshold during Sunday's opening session of the Keeneland September sale when garnering a top bid of $1.1 million from Mandy Pope's Whisper Hill Farm. Consigned by Denali Stud, Agent LIX as hip 58, the Mar. 21 foal was bred in a partnership between Bridlewood Farm and Don Alberto Corp. The powerful co-breeders paid a sale-topping $3.5 million for group-placed dam Baffled (Distorted Humor) in foal to Tapit at the 2016 Fasig-Tipton November Sale. Don Alberto subsequently bought out Bridlewood for $1.8 million while Baffled was carrying a full brother to hip 58 at last year's renewal of that same sale.

“It was a little over; it was about what we expected, though,” said Pope's bloodstock advisor Tod Quast. “It was a little more than we wanted to spend, but you are not going to get a bargain on a filly of that quality, even in this sale right now. We were super happy with her physical. We think she is a racehorse, but obviously she will be a broodmare later… [Pope] is a commercial breeder, but we race too and we are happy to have a good physical to race and when you have the pedigree side to go with it, it is a win-win.”

By Sunday, Whisper Hill had already sent another well-pedigreed filly back home–Pope made the decision to scratch hip 400, the first foal out of champion Songbird by the late superstar Arrogate. She paid $9.5 million for the mare.

“We didn't really have a good Fasig sale,” Quast noted. “We love this filly and compare her to Songbird, so we just thought why sell her? She is already back in Ocala.”

Hip 58 is also a half to English Group 2 winner Boynton (More Than Ready) and American dirt GSW Jacaranda (Congrats). She hails from the deep female family of highest-level winners like Emcee and Awesome Humor.

“This filly was bred in partnership with Bridlewood,” noted Don Alberto's Fernando Diaz-Valdes. “We have some foals out of her [together], including a filly who is at the farm. We're very excited. She did what we wanted her to.”

Benvenutta, the 3-year-old Tapit filly who Baffled was carrying when Bridlewood and Don Alberto made their big buy, remains unraced and last breezed in October of 2019. Baffled's 2-year-old Tapit colt Constitutional Law worked on Saturday for trainer Todd Pletcher (5f, 1:02.21, 16/30 over the Belmont training track). Baffled produced a full-brother to hip 58 this year and is carrying a Curlin filly.

Denali's Conrad Bandoroff talks about the filly and the sale below.