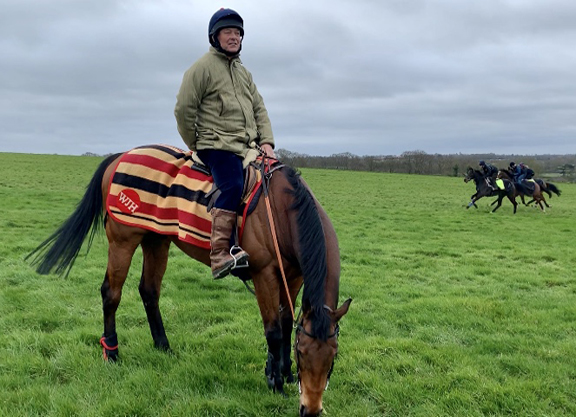 Derby-winning trainer William Haggas is looking forward to the G1 Cazoo Derby on June 5. The trainer, who won the race 25 years ago with Shaamit (Ire) (Mtoto {GB}), has listed winner Mohaafeth (Ire) (Frankel {GB}) to take part in the Blue Riband.

“The race means exactly the same as it did 25 years ago in that it's the ultimate race for an English trainer to win or to try to win,” Haggas reflected. “We've thrown a few darts at it unsuccessfully and it's a very hard race to win. If we'd have known how difficult it was to find a horse to run in it never mind win it all those years ago, we'd have enjoyed Shaamit even more.

“We had the usual thing that it was 'the worst Derby people had ever seen at Epsom' but it didn't matter because we won it and I'd be delighted for the same to happen next Sunday if the headlines are 'Mohaafeth wins worst Derby on record'–it suits me well.”

Mohaafeth saluted in a Lingfield novice in his 3-year-old bow on Mar. 19, and added an Apr. 14 Newmarket handicap over 10 furlongs next out. Tried in black-type company on the QIPCO 2000 Guineas Day undercard, the colt impressed in the Listed Betfair Newmarket S., drawing off to win by five lengths in good style.

Of his Shadwell-owned colt, Haggas said, “He's very good after Newmarket. Jim [Crowley] came this morning and rode him on the Rowley Mile and he worked with two very smart older horses and he worked very nicely. The ground was too soft for him and I've been quoted many times saying that this horse is a top of the ground horse and I stick by that. It was a hard piece of work and it was designed to be a tough piece of work and we'll hopefully just have an easy time now until next Saturday.

“I think he's got a chance but I've always felt that it's not whether they'll see it out but whether they'll improve. Whether he's better at a mile and a half than a mile and a quarter I'm not so sure, but there's no better race in the world than the one next Saturday so we'll be very keen to give it a go.

“It could be that he was really flattered by that, but it also could be that the horse is making good improvement quite quickly, so I have taken the latter line and there's no bigger race than The Cazoo Derby. We are greatly looking forward to it and whether he's good enough we'll find out, but he was visually very impressive at Newmarket and the form is very strong if it is to be believed.

Another Haggas trainee, M M Stables' Alenquer (Fr) (Adlerflug {Ger}), will not be supplemented for the Cazoo Derby. A winner of the G3 bet365 Classic Trial at Sandown on Apr. 23, the colt will be pointed to G2 King Edward VII S. at Royal Ascot.

“He's not going to be supplemented [to the Derby],” said Haggas. “He had a little bit of a blip before the Dante and he's on his way back. He's going to miss the Derby and we had the option of supplementing him for the Irish Derby.

“I had my heart set on the German Derby which he's in because he's by a German-bred stallion in Adlerflug, but Germany have basically said they don't want us because England is on the red list [COVID]. I would like to think that we will go for the King Edward VII S. at Royal Ascot in June.”

Sunderland Holding Inc.'s Sea Empress (Ire) (Sea The Stars {Ire}) will also skip the G1 Cazoo Oaks on June 4. A winner of a Newcastle maiden last October, the chestnut could only manage a sixth in the Listed Haras de Bouquetot Fillies' Trial S. at Newbury on May 15.

“I'm not planning to run her as I don't think she did enough at Newbury and we'll probably take her out on Saturday,” said Haggas. “I think she's going to go to Chelmsford next week for a mile and a quarter novice race and then we'll look at something a bit bigger if she gets her career back on track. At the moment she's just a talking horse and she didn't do a lot of talking at Newbury so we're having a re-group.”

Also on Cazoo Oaks Day is the G1 Coral Coronation Cup, and Haggas's MGSW Al Aasy (Ire) (Sea The Stars {Ire}) will take his chances on June 4. The G3 John Porter S. on Apr. 18 and the G3 Aston Park S. on May 15, both at Newbury, were each tallied to the 4-year-old Shadwell entire's win column this spring.

“You're never quite sure if they're going to act round there [Epsom Downs] but he's a very well-balanced horse and he's a good mover so I don't see why not,” said the trainer. “I'm glad there aren't going to be 50,000 people there in terms of the occasion but I think we'll be alright–he's a boy and he knows he is, but once he gets out he'll be fine and he's not an issue.

“We've always thought plenty of him. He's a lovely horse and he works the way he runs in that he gives everything on the gallops as well. The style of his win was very good and he'll have a good chance if all goes well.”

Rounding out Haggas's brigade of stars, MG1SW globtrotter Addeybb (Ire) (Pivotal {GB}) will reappear at Royal Ascot in either the G1 Prince Of Wales's S. or the G1 Coral-Eclipse S. later in the summer.