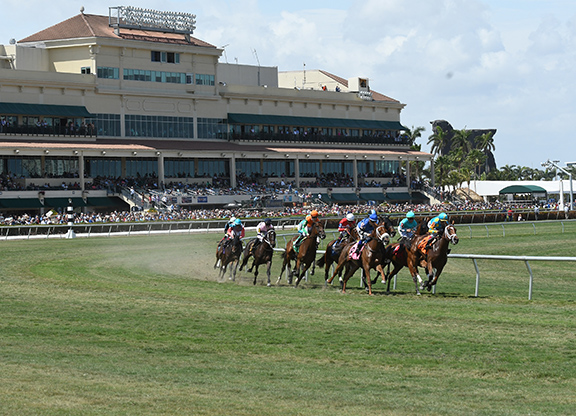 > After finishing second in Sunday's fourth race at Gulfstream aboard 8-1 shot Musical Heart (Maclean's Music), jockey Tony Maragh has been suspended 60 days and fined $1,000 by the track's stewards for failing to persevere with his mount. In addition, the horse's trainer, Aubrey Maragh, was ruled off the grounds pending an investigation. Tony Maragh is Aubrey Maragh's nephew.

The length of the suspension and the amount of the fine are the maximum penalties the stewards are allowed to hand out.

The Maragh family was well represented in the race as Aubrey also started Northern (Adios Charlie), who was ridden by another of his nephews, Romero Maragh. Still another horse, Fafa (Blame) is trained by Aubrey's brother, Allen and owned by Rajkamal Margh. It was not immediately clear what relation between Rajkamal and the other members of the family is.

Northern and Musical Heart are also both owned by Joseph Bucci.

In the six-furlong dirt race, Musical Heart was making his first start since April 22 and had been running in one-mile grass races. He was last early while not being pushed by the jockey, but began to close in on the leaders at the three-eighths pole. He kept making up ground and missed by just a head.

The Equibase chart caller wrote the following in his footnote of the race: “MUSICAL HEART reserved racing wide and unasked while trailing field in early stages, began to move up closer racing wide still unasked in the turn, entered top stretch eight wide and continued to gain without being persevered with.”

Tony Maragh told the stewards after the race that he was so weak from reducing in the sauna that he did not have the strength to ride the horse any harder.

When reached by the Thoroughbred Daily News, Aubrey Maragh defended his nephew and said he had little doubt that his excessive time in the sauna was behind the problem.

“This is a sickening thing, what they did,” he said. “I told them what I knew. I took my horse out there to run and the rider told me he had been in the sauna box and he dehydrated and he locked up, that he felt like he was going to faint. That happens to a lot of jockeys. He is always having to pull weight because he is too heavy. That's why he doesn't ride much.

“Watch the race. At 3 1/2 furlongs, he got down to ride the horse and he said he couldn't move. He cramped up all over. He said, 'Uncle I couldn't do any better. All I could do is hang on. I spent too much time in the box.'”

The TDN was not able to reach Tony Maragh, but his uncle said he was extremely upset.

“He is sick over this,” Aubrey Maragh said. “He knows he should have won the race. He told me what happened. I said to him that it was most important that he take care of himself. Romero came out of the sauna box earlier and he dropped down and they had to take him to hospital.”

Badgett said there were no unusual betting patterns on the race. Aubrey Maragh said he bet the race, using Northern on top of his tickets and Musical Heart in second and third in trifecta and superfectas.

“I thought Northern was going to win the race,” he said. “He had been training really good. Musical Heart hadn't run in four months and figured he could come on late and finish second or third.”

Badgett said Maragh showed him the tickets with his bets, but he didn't find that to be convincing evidence.

“I watched the race a thousand times and I still can't believe what I saw,” he said. “The whole thing is suspicious. The integrity of this game is what is most important to us. The economic engine of this sport is the betting public and we have to protect them.”

Badgett said there could be further penalties levied against Tony and Aubrey Maragh, and that Gulfstream management has the right, as the owner of a private property, to take action above and beyond what the stewards are allowed to do.