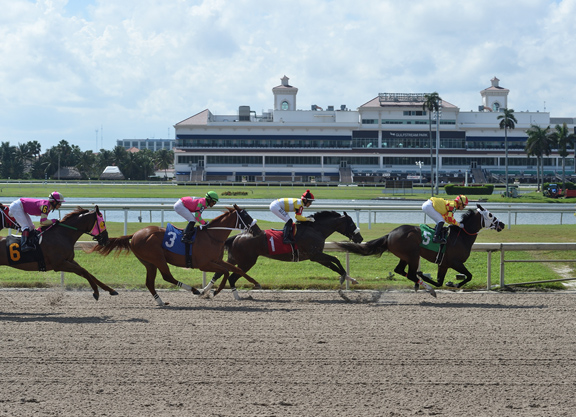 When Gulfstream kicks off its Championship Meet on Dec. 2, fans will be welcomed back to the South Florida track. Bill Badgett, the executive director of Florida racing operations for The Stronach Group, said the current plan is to allow fans to attend, with a limit of 50% of the track's capacity. He said that would allow as many as 6,000 or 7,000 fans to attend races like the GI Pegasus World Cup and the GI Florida Derby.

“It will be great to see people down on the rail watching the horses and having a good time,” Badgett said. “It's been depressing coming to work and nobody is in the stands.”

Florida Governor Ron DeSantis has been among the most aggressive governors in the country when it comes to allowing businesses to reopen. Late last month, he announced that all COVID-19-related restrictions on businesses have been lifted and that bars and restaurants in the state can operate at full capacity. Prior to Sunday's NFL games, DeSantis gave the Miami Dolphins clearance to have a full-capacity crowd for their games at Hard Rock Stadium. The Dolphins said they would continue to allow 13,000 fans to attend home games at a stadium that seats 65,326.

Since June, owners and invited guests have been allowed to attend the races at Gulfstream. The track was first closed to the public on March 13, but racing continued at Gulfstream uninterrupted through the worst months of the pandemic.

Racing shifted to Gulfstream Park West, where there is no grandstand, Oct. 3.

Badgett acknowledged that it was hard to make plans because the COVID-19 situation in Florida remains so fluid. In mid-July there was a spike in the numbers with 15,300 Floridians testing positive on July 12. There were 2,582 positive tests in the state on Saturday.

“Trying to come up with a plan more than 60 days out before the meet starts is almost impossible because things change virtually hour to hour here,” he said. “They opened up the bars and restaurants to full capacity but the numbers are starting to go back up. You still have kids getting sick at school and around the country the athletes are still coming up positive and football games are being canceled. We are going to try 50% capacity at the start of the meet and work from there. Hopefully, things will get better. There's a chance that as the meet goes on we can open up things even more.”

Badgett said management is still working on protocols that will be in place when the fans return. He said that, at the very least, all fans will undergo a temperature check before entering the facility and will be required to wear masks once inside.

“This thing is not going away anytime soon and we will do everything we can to keep people protected,” he said. “The box area will be open and some grandstand seating, with social distancing, will be available. That way we can delegate certain sections and areas that we can control.”

In addition to keeping the fans safe, Gulfstream will also have to keep an eye on the hundreds of horsemen, backstretch workers and jockeys that come in each year for the Championship meet.

“We have to protect these people and keep them safe,” Badgett said. “There is so much that goes into this, more than people realize. This will be difficult, but we will get it done.”