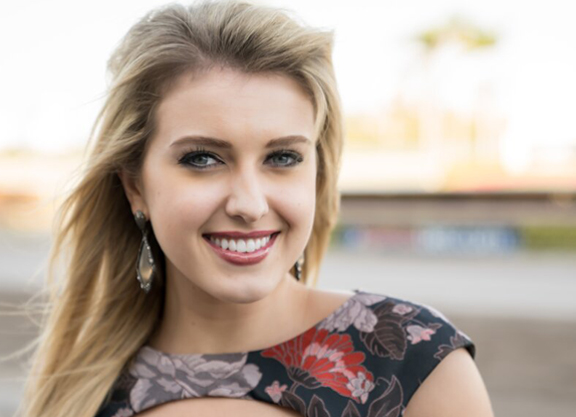 With the fifth running of the $3-million GI Pegasus World Cup Invitational S. on the horizon, Gulfstream television host Acacia Courtney joined the TDN Writers' Room presented by Keeneland Wednesday morning. Calling in via Zoom as the Green Group Guest of the Week, Courtney talked about the significance of her and her colleagues' work on the New York Racing Association's “America's Day at the Races” broadcast that shined while other sports were on hold due to the pandemic last spring, how she thinks racing can better market itself and more.

“We got so much positive feedback from [the NYRA show], which was really appreciated,” Courtney said of the fan reaction. “We love our jobs and we're very lucky to have them, particularly this year. It was really special that we were able to continue bringing the excitement and love of horse racing to people who were longtime fans as well as people who were newer to the game. They were able to watch and feel like they were there with us. It was a lot of work because we were kind of a skeleton crew so it was a little bit exhausting, but at the same time, it was so fulfilling. I'm so grateful to be a part of it. I just really hope we're able to have fans back, particularly at a place like Saratoga, next year.”

Given the success of the show and the potential it created for an entree into the game for new fans, Courtney was asked about what racing can do better to market the game.

“I don't think we should do fans the disservice of dumbing the sport down too much,” she said. “There's a lot of information and it can be a lot when it's thrown at you all at once, but I think people enjoy the puzzle of trying to figure it out. If you look at any major sport on TV, they give you all the stats, the players' backgrounds and I think that information helps quite a bit. Access to information and giving people tools to be able to read that information a little bit easier is definitely something that I think will help with new fans. When I've been able to bring friends to the track, once you teach them exactly what's going on, then you can just leave them to have fun. I really think that there is something for everybody.”

Elsewhere on the podcast, the crew discussed their views on the future of the Pegasus and, in the West Point Thoroughbreds news segment, shared their surprises from the announcement of this year's Eclipse Award finalists. Click here to watch the podcast; click here for the audio-only version.