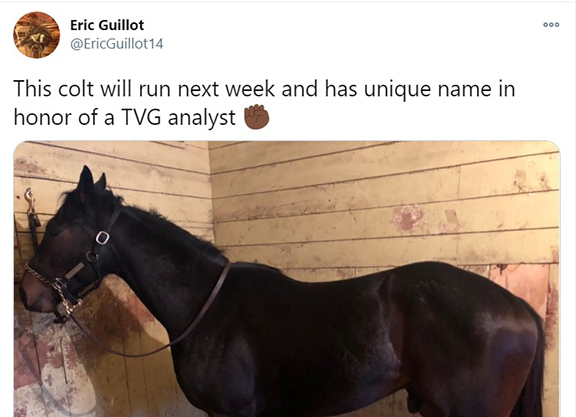 After a horse reportedly named after a racist slur won the first race at Aqueduct Jan. 8, reaction on social media and throughout the industry was swift to denounce the name and trainer Eric Guillot, who had posted a picture of the horse and its name days earlier on social media.

The 3-year-old gelding by Uncle Mo, who won his debut Friday, was named Grape Soda, a racist stereoptype directed at African Americans. A Tweet on January 1 on Eric Guillot's Twitter feed indicated that he had been named after a TVG announcer. It was clear on Twitter that most people believe Guillot was talking about Ken Rudulph, the only on-air African-American at the network.

“This colt will run next week and has unique name in honor of a TVG analyst,” Tweeted Guillot, with an emoji representing the Black Power fist. One of Guillot's followers, Steven Kahn, Tweeted back at Guillot, “What's his name??” Guillot responded, “GRAPE SODA.” He followed that up on January 2 with a Tweet that said, “GRAPE SODA breezed 49.3 smooooth a menthol Kool,” and an emoji with a Black hand giving the thumbs up symbol, and posted a gif of an African American man making a “shhh” motion. 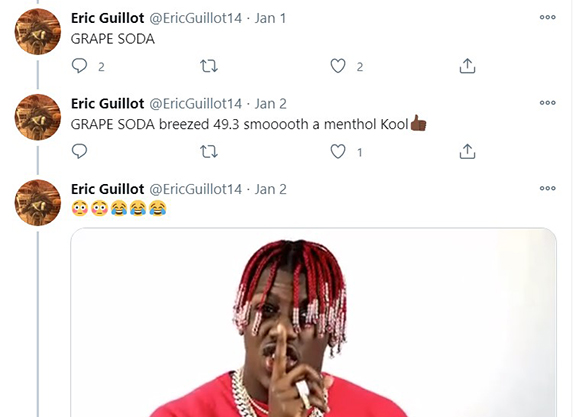 After the race yesterday, Tweeted that he had named the horse after a fond childhood memory of drinking the beverage. “When I went home for Xmas my 88 year Mother got a kick out of me naming a horse after my favorite drink when I was little boy she always reminded me of it for years! I'll send her a pic.” (Grammar and usage copied as is from Tweet.)

Reached by telephone, Guillot said that he would not comment on the issue. “I am not commenting on this stupid media-frenzied stupid (expletive) thing,” he told the TDN. “Is that what you called me about?” When the TDN said that it was indeed what we had called about, he replied, “I've gotten 10 calls and that's what's wrong with this country. I'm the furthest thing from racist. But if that's what everybody wants to believe, go right ahead.”

The TDN subsequently asked Guillot if rumors that he had planned to retire before running this horse were true, and he confirmed that he had retired. “That was the last horse I ever ran. This has been something that's been in the making for a while now.” At around noon on Saturday, he posted a video on Twitter which he said depicted his first day of retirement, spent “driving west” and drinking Starbucks.

The New York Racing Association was quick to ban Guillot from receiving stalls or entering horses at their tracks..

“Racism is completely unacceptable in all forms,” read a statement from NYRA President and CEO David O'Rourke. “NYRA rejects Eric Guillot's toxic words and divisive behavior in the strongest terms. At this time, he will no longer be permitted to enter horses at any NYRA track nor will he be allocated stalls on NYRA grounds. In addition, we will review what further steps may be available to us. Our racing community is diverse, and we stand for inclusion.”

As of Friday, Guillot had four stalls at Belmont. They had been vacated by Saturday.

Aidan Butler, the Chief Operating Officer at the Stronach Group's 1/ST Racing, said that Guillot would no longer be welcome at their tracks, either. “1/ST RACING stands firmly against the inexcusable actions of trainer Eric Guillot,” said Butler in a statement emailed to the media. “There is no place in the sport of Thoroughbred racing for racism in any form. Our company will not tolerate the use of hateful and divisive language or behavior. 1/ST RACING agrees fully with the New York Racing Association's move to ban Mr. Guillot from racing and will take the same action. Mr. Guillot is no longer welcomed at any 1/ST RACING track.” Stronach tracks include Santa Anita, Golden Gate, Gulfstream, Laurel and Pimlico.

The Jockey Club issued a statement Saturday morning that said that the naming of the horse violated the harassment policy in the American Stud Book.

“The Jockey Club was notified yesterday that the name Grape Soda, which was approved for a 2018 gelding, was potentially offensive. Upon review we have confirmed that the name is ineligible under Rule 6.F.11. of the Principal Rules and Requirements of The American Stud Book, and we have begun the name change process in consultation with the current owner, which must be completed as soon as possible.”

Rule 6.F.11 prohibits using, “Names that appear to be designed to harass, humiliate, or disparage a specific individual, group of individuals, or entity.”

The horse was claimed in his start Friday by owner Lawrence Roman and trainer Rob Atras. Reached by telephone Saturday morning, Roman said he was very upset to learn what the horse's name meant.

“I will absolutely change the horse's name,” said Roman. “I had no idea this was a slur. I don't want a name like that. I am very conscious of things like that. I will be calling my trainer immediately and doing whatever we can do to get his name changed. It's despicable that someone would name a horse for those reasons. You don't do that. We have enough problems as it is in the world. I promise you that that horse will not race again under that name.”

Roman later reported that he planned to rename the gelding “Respect For All,” and that he would donate 10% of the horse's earnings to New York racing backstretch workers.

“I want to do this so something good comes out of something bad,” said Roman.

By 1 p.m., The Jockey Club had announced that they had approved the new name.

Ken Rudulph told the TDN that he did not wish to comment directly on the story, but did engage in conversations on Twitter with some of his followers.

“The winner in race #1 from Aqueduct is the perfect example of my issue with horse racing,” he Tweeted Friday after the race had been run. “The winning trainer is a disgusting and racist man. But, if you want to make money in this game you have to be able to ignore that stuff. I can't do it. But y'all carry on with your $11.” Grape Soda paid $11.20 to win.

In addition to many messages of support, Rudulph got some pushback on Twitter, including one person who wrote, “It was a horse. Let it go.”

Rudulph reacted Saturday. “Y'all sent lots of angry tweets and DM's my way. Received text messages from friends and colleagues. Many viewers attacked and questioned my perspective. I told you that horse racing has a TON of racists hiding in plain sight. Now…what are you gonna do about it? Let's go.”

Rudulph's network, TVG, put out a statement as well from CEO Kip Levin, which read: “TVG commends NYRA for taking swift action on the matter involving Eric Guillot. There is simply no place in society for racism and we condemn his behavior, a deliberate attempt to slur one of our employees, in the strongest terms. Our network will no longer air races in which he has an entry. We also commend the action by new owner Larry Roman to change the horse's name. We will continue to work toward making racing more inclusive and to attracting a new generation of fans to the sport.”

Joe Appelbaum, the head of New York Thoroughbred Horsemen's Association, said, “Racism, whether overt implicit, has no place in our community. NYTHA is working with The Jockey Club and the new owner and we are hopeful that a name change will be coming shortly. What is wrong with people? It would be so much easier to just be nice to everybody.”