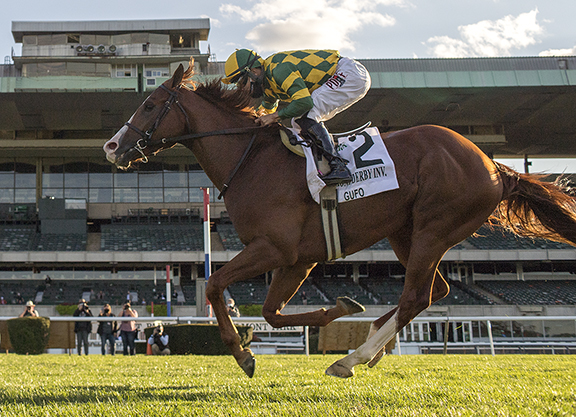 Gufo (Declaration of War), favored at 7-5 in Saturday's GI Belmont Derby Invitational, a 'Win and You're In' for the GI Breeders' Cup Turf at Keeneland, came storming down the stretch to deliver a smart, one-length victory over No Word (Silent Name {Jpn)). Mo Ready (Uncle Mo) was third.

Gufo capped a four-race winning streak with come-from-behind scores in Gulfstream's English Channel S. May 2 and Delaware's GIII Kent S. July 4. He established a new course record in the latter.

Gufo caboosed the Belmont Derby field of eight as they began their run into the clubhouse turn. He raced in a covered up fifth through a half mile in :50.61 and began to launch midway around the far turn. The chestnut punched through a tight spot splitting horses and slightly drifted out, forcing Eric Cancel aboard a tiring Moon Over Miami (Malibu Moon) to tap on the brakes in the stretch.

Gufo had all of the momentum from there, however, and came rumbling home to record a career high.

The result stood after a Stewards' Inquiry looked into the stretch run regarding Gufo and Moon Over Miami.

“He won well,” winning trainer Christophe Clement said. “I thought he had a great trip from Junior [Alvarado] and when he asked him to quicken, he really quickened well in the stretch. He's a good horse. If you look at all his races this year, he's been running well all year round. I know he got beat last time, but he actually ran a winning race when you look back at it.”

On a potential start in the Breeders' Cup Turf, Clement added, “I'm not sure. We'll have to check with the owner and see how he comes out of it. There's also the [GI] Hollywood Derby [Nov. 28 at Del Mar] going a mile and an eighth.”

Gufo is the sixth Grade/Group 1 winner for Declaration of War. He is the sire of 17 graded winners (30 blacktype) and was also responsible for GII Pilgrim S. hero Fire At Will on the undercard. Petionville is the broodmare sire of five graded (20 blacktype) stakes winners.

Gufo is a half-brother to popular three-time graded victor Hogy (Offlee Wild). Floy's most recent produce is the unraced 2-year-old filly Sisi (Tourist). She was bred to Preservationist for 2021.

Floy, a homebred for Fairly Stable, was fourth in her lone career start for Jeffrey D Thornbury at Keeneland in 2007. She RNA'd for $1,500 in foal to Shaniko at the 2011 FTKFEB Sale.