Guarana Tough To Go Past in Madison 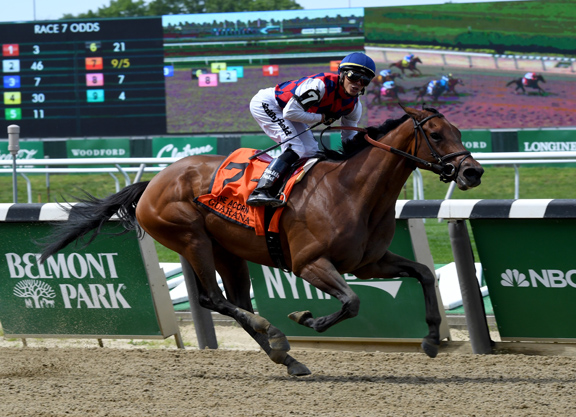 'TDN Rising Star' Guarana (Ghostzapper), already a two-time Grade I winner from only five career starts, will look to remain undefeated around one turn in Saturday's GI Madison S. at Keeneland.

Accorded 'Rising Star' status after romping by better than 14 lengths through the local slop last April, the bay defeated GI Kentucky Oaks heroine Serengeti Empress (Alternation) by a half-dozen lengths in the GI Acorn S. last June and successfully stretched to two turns in the GI CCA Oaks at Saratoga the following month. She suffered her first loss when runner-up to Street Band (Istan) in the GI Cotillion S. at Parx in September and was never out of second gear in landing a June 4 Churchill allowance by 5 1/4 lengths. Guarana would become her sire's third Madison winner in the last seven runnings (Judy the Beauty, 2014; Paula'ssilverlining, 2017).

Mia Mischief (Into Mischief), decisive winner of last year's GI Humana Distaff S. going this distance, has retained top form since being purchased by Stonestreet for $2.4 million at Fasig-Tipton November last fall. The 5-year-old is two-for-three this season, having defeated the fleet-footed Amy's Challenge (Artie Schiller) by 4 1/2 lengths in the Apr. 25 Carousel S. at Oaklawn, but she was a well-beaten third behind Bell's the One (Majesticperfection) in the May 30 GIII Winning Colors S. at Churchill.

Bell's the One, who is forced to give weight all around under the conditions of the race, got a tremendous set-up in the six-furlong Winning Colors that flattered her off-the-pace running style, as she rolled home to best Break Even (Country Day) by three sound lengths. The waters are considerably deeper here, but she returns to the same track and trip over which she annexed last October's age-restricted GIII Lexus Raven Run S. and the race shape could be in her favor this time as well.