Gryder the Rider Returns to California 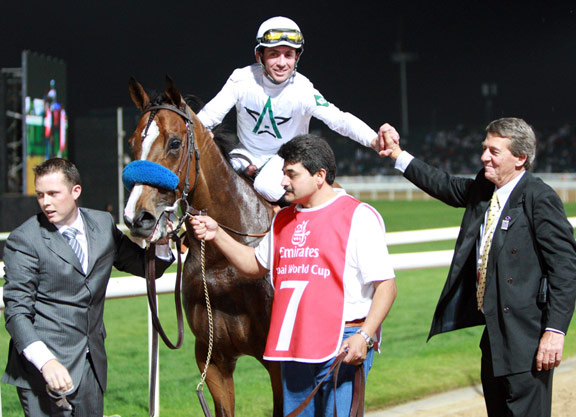 “Go West, young man” was terrific advice when dispensed by Horace Greeley in the 19th Century, and it works as well today for the peripatetic Aaron Gryder.

After picking up only eight mounts while in Monmouth Park's jockey colony during the current meet, he packed up and headed out Monday. This Friday, the winner of 3,727 career races and 84 graded stakes begins anew at Northern California's Golden Gate Fields.

“There is a big pool of riders for a small pool of horses at Monmouth, so you'd better be one of the ones in demand. I wasn't in demand,” Gryder, 47, said. “The purpose of going back East two winters ago at Aqueduct was to generate some business. I did decent the first year, but last year during the winter I didn't do so well, so I figured Monmouth was a place where I'd have an opportunity to ride for some of the New York outfits and the New Jersey people I used to ride for.”

But with Monmouth fighting to fill stalls and races, the old mainstays are gone.

“It makes no sense for me to be there if I'm not riding. It only makes sense if I'm doing extremely well because I'm doing this to help my kids. I was 3,000 miles away from them. They need a father,” he said.

His son Christian is 17 and planning to join the U.S. Marine Corps after high school graduation next year, and his daughter Grace turns 15 in August.

“These are critical ages where they need stability and need their parents around. It's very important I be there for them,” said Gryder, who is divorced from their mother. “During the last two years when I was riding back East I didn't get to spend as much time with them as I would have liked.”

Not only has he been on the East Coast of late, his enduring journey over the last three decades would evoke envy in even the most adventurous traveler.

After growing up in the shadow of Santa Anita Park and never wanting to be anything but a jockey since the age of four, he won his first race at 17 at the old Agua Caliente in Mexico in 1986 and his first Grade I score came in Hollywood Park's 1987 Matriarch S.

Since then he's earned 18 leading rider titles while based at Aqueduct, Arlington Park, Churchill Downs, Hollywood, Golden Gate Fields, and tracks across the Southwest. He's relocated his tack to Hong Kong and Saudi Arabia, and the itinerary includes stops at tracks from Ascot to Australia.

“I've ridden all around the world, but I haven't been there enough for my kids in the past. I need to be with them now,” he emphasized.

Although the kids live in Southern California, where the circuit is mighty tough, he realizes business will be brisker in Northern California. Even better, the four-day live race week allows him to balance family with career as they can be together on dark days.

Gryder reunited with agent Dennis Patterson, who said he got a call from his old client out of the blue last weekend. The last time Gryder was based at Golden Gate, from February 2011 to June 2012, Patterson said they teamed to win an impressive 270 races in those 17 months.

But Gryder hasn't won a graded stakes race since 2014, a Grade or Group 1 event since he and Well Armed took the 2009 Dubai World Cup, or a Breeders' Cup since he piloted Calidoscopio to victory in the 2012 GII BC Marathon. His last score, in a $47,000 waiver claimer at Aqueduct, dates Jan. 12.

Nonetheless, the welcome mat is out at Golden Gate.

“I'm happy Aaron's coming back. We had a lot of success together here and I'm anxious to win with him,” said leading trainer John Martin, who legs up Gryder on three of his four calls on Friday's card. “He's a good rider and a good guy and he fits well here. I have a big, balanced barn with 47 horses. He can't miss here because I'm going to give him a lot of live horses to ride. There are some good riders here so it will take a little while for me to get him on a lot of horses, but I've got some I can put him on right away. I expect him to win a couple in his first days here.”

Patterson was pleased to report interest is robust from other outfits as well, and a very fit and gung-ho Gryder said he is invigorated, excited, and eager to ride for as many as he can.

Although the attractive, articulate, smart and personable Gryder excelled as an on-air racing analyst for TVG, HRTV, NBC Sports and UK Productions overseas, has acted in commercials, been part of the reality TV series “Jockeys”, and even performed in an episode of “The Sopranos”, a second career is on hold.

“I'm not ready to hang it up if I can generate the business. I want to stay in the game. I love it and I love riding horses,” he said with the passion evident in his voice. “I still get a big rush out of it.”