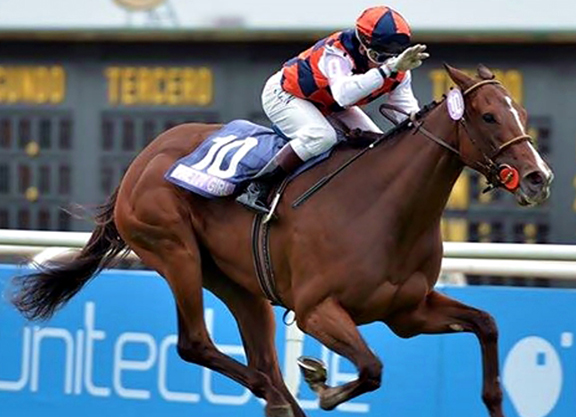 Stud RDI LLC and Bonne Chance Farm’s Pretty Girl (Arg) (Harlan’s Holiday–Piba Como Vos {Arg}, by Candy Stripes), a Group 1 winner in her native Argentina, has been retired to Bonne Chance Farm in Kentucky and will be bred to Union Rags in 2018, according to Turf Diario, which spoke with Alberto Figueiredo, RDI manager, and trainer Paulo Lobo.

Sent to the sidelines for a year and a half following her win in the G1 Copa de Plata S. at San Isidro in December 2014, the well-traveled mare raced three times in France, notching a stakes win in July 2016. She most recently competed in Southern California under the care of Lobo, placing in both the Mar. 12 GII Santa Ana S. and the Aug. 5 GII Yellow Ribbon S. She closed out her career with an eighth-place finish in Del Mar’s GI Matriarch S. Sept. 2.