Gretzky the Great Skates to Win in GI Summer S. 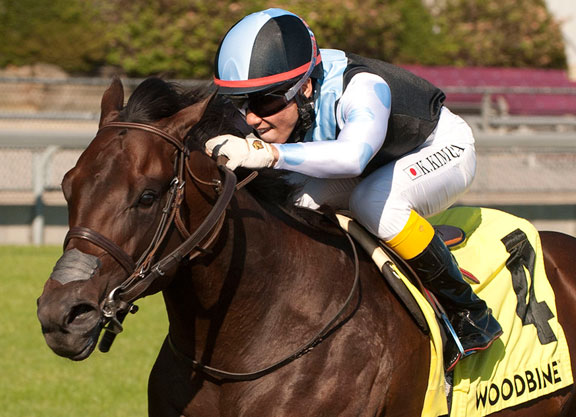 Gretzky the Great (Nyquist), who became freshman sire Nyquist (Uncle Mo)’s first stakes winner in August, became his second Grade I winner less than a month later with a victory in Sunday’s GI Summer S. at Woodbine. The score in the “Win and You’re In” event punched Gretzky the Great’s ticket to the GI Breeders’ Cup Juvenile Turf and gave Japanese-born jockey Kazushi Kimura his first career Grade I triumph.

Unveiled going five furlongs on the local turf July 12, the Ontario-bred was runner-up to re-opposing rival Ready to Repeat before graduating by open lengths in an off-the-turfer there Aug. 2. Getting up late to capture the 6 1/2-furlong Soaring Free S. three weeks later, Gretzky the Great was made a narrow favorite here.

Coming away well, the bay deferred to draft in behind of Ready to Repeat in the two path for the long run up the backstretch. Traveling comfortably past fractions of :24.10 and :47.82, he was given just a nudge by Kimura three-eighths out and sidled up alongside the pacesetter soon after straightening for home as the top two separated themselves from the pack. Overtaking Ready to Repeat past the three-sixteenths pole, he quickly kicked clear while briefly lugging into his foe’s path and cruised home much the best. An inquiry was taken into the winner’s drifting, but the result stood.

“He is such an amazing horse,” said Kimura. “Through the final stretch, he had a tremendous explosion. He sometimes was lugging in a little bit, but he’s just still a baby. First time out it was only five furlongs, then when he won I was like, ‘Oh, that will be a stakes horse for the future.’ And then winning a stakes and now he’s got a Grade I, he’s such a nice horse.”

Already the second Grade I winner for Darley’s first-crop sensation Nyquist–following GI Spinaway S. victress Vequist–Gretzky the Great is the second foal to race out of MSP Pearl Turn. Bought by Anderson Farms for $310,000 at Keeneland November in 2016, she has a yearling Quality Road colt and visited Uncle Mo this spring.