Gretzky Looks to Become Next GISW for Nyquist in Summer 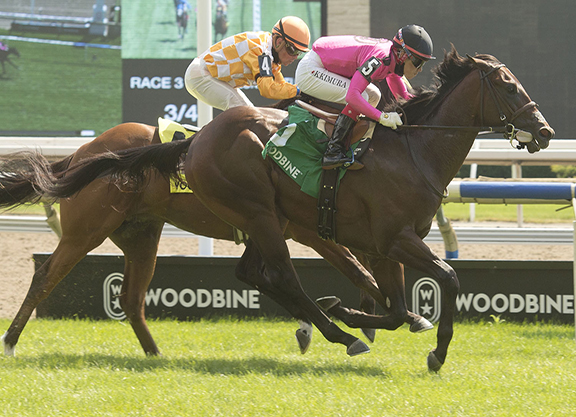 Gretzky the Great (Nyquist) will be favored to become his freshman sire's second top-level scorer Sunday in Woodbine's GI Summer S., which grants the winner a spot in the gate for the GI Breeders' Cup Juvenile Turf. Second behind subsequent Victoria S. winner Ready to Repeat (More Than Ready) in his grass debut here July 12, he graduated at second asking in an off-the-turf sprint here Aug. 2. The Mark Casse pupil captured the Soaring Free S. going 6 1/2 panels on the local lawn next out Aug. 23, giving Nyquist his first black-type victor. Casse also saddles D J Stable's $800,000 OBSAPR purchase Dolder Grand (Candy Ride {Arg}), who rallied to be third on debut behind Download (Society's Chairman) in a seven-panel turf test over this course Aug. 23.

A pair of first-out winners take a big step up in class here in American Monarch (American Pharoah) and Heat of the Night (Summer Front). Trained by Bill Mott, the former rallied to victory in a two-turn turf event at Saratoga Aug. 8, overtaking the Chad Brown-trained Secret Potion (Into Mischief) late. Tim Hamm saddles Heat of the Night, who broke his maiden in a one-mile event on the Gulfstream lawn Sept. 3.