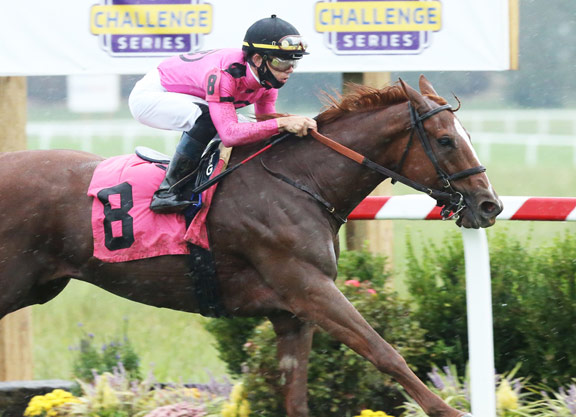 MGISW Got Stormy (Get Stormy) makes her first start for her new owners Saturday in Gulfstream's GIII Honey Fox S. Winner of the GI Fourstardave H. and GI Matriarch S. in 2019, the chestnut checked in second against males in this year's renewal of the Fourstardave Aug. 22. The chestnut captured the GIII Kentucky Downs Ladies Sprint S. Sept. 12 and followed suit with a win in Keeneland's GIII Buffalo Trace Franklin County S. Oct. 9. Closing out her 2020 campaign with a fifth in the GI Breeders' Cup Turf Sprint S. Nov. 7 at Keeneland, Got Stormy was purchased by Spendthrift Farm for $2.75-million at the Fasig-Tipton November Sale and returned to Mark Casse's care for another year. My Racehorse, who partnered with Spendthrift on reigning Horse of the Year Authentic (Into Mischief), teams up with B. Wayne Hughes's operation again on this popular mare.

“We're very pleased with her. Last year I felt like maybe I didn't have her quite as ready for her first start when we ran her, and the one thing I did was I tried to get her ready on the dirt,” Casse said. “So, this year I changed my mind and I sent her down and she's been breezing over the turf. She loves to breeze on the turf. She should be a good and ready.”

Zofelle (Ire) (Zoffany {Ire}) was a close second in the Sand Springs S. here last March and completed the trifecta in the GIII Mint Julep S. at Churchill May 30. Tiring to fifth after a wide trip behind Newspaperofrecord (Ire) (Lope de Vega {Ire}) in Belmont's GI Just a Game S. June 27, the bay kicked off this term with a late-rallying score in the GIII Marshua's River S. over course and distance Jan. 23.

MSW Feel Glorious (GB) (Bated Breath {GB}) has been knocking at the door of a graded success for most of her career. Third in both the GII New York S. and GIII Matchmaker S. last summer, the bay captured Saratoga's Perfect Sting S. in August, but failed to fire when seventh in Belmont's GIII Noble Damsel S. Sept. 26. Fourth in that venue's GIII Athenia S. Oct. 25, she won the Forever Together S. at Aqueduct last time Nov. 27.