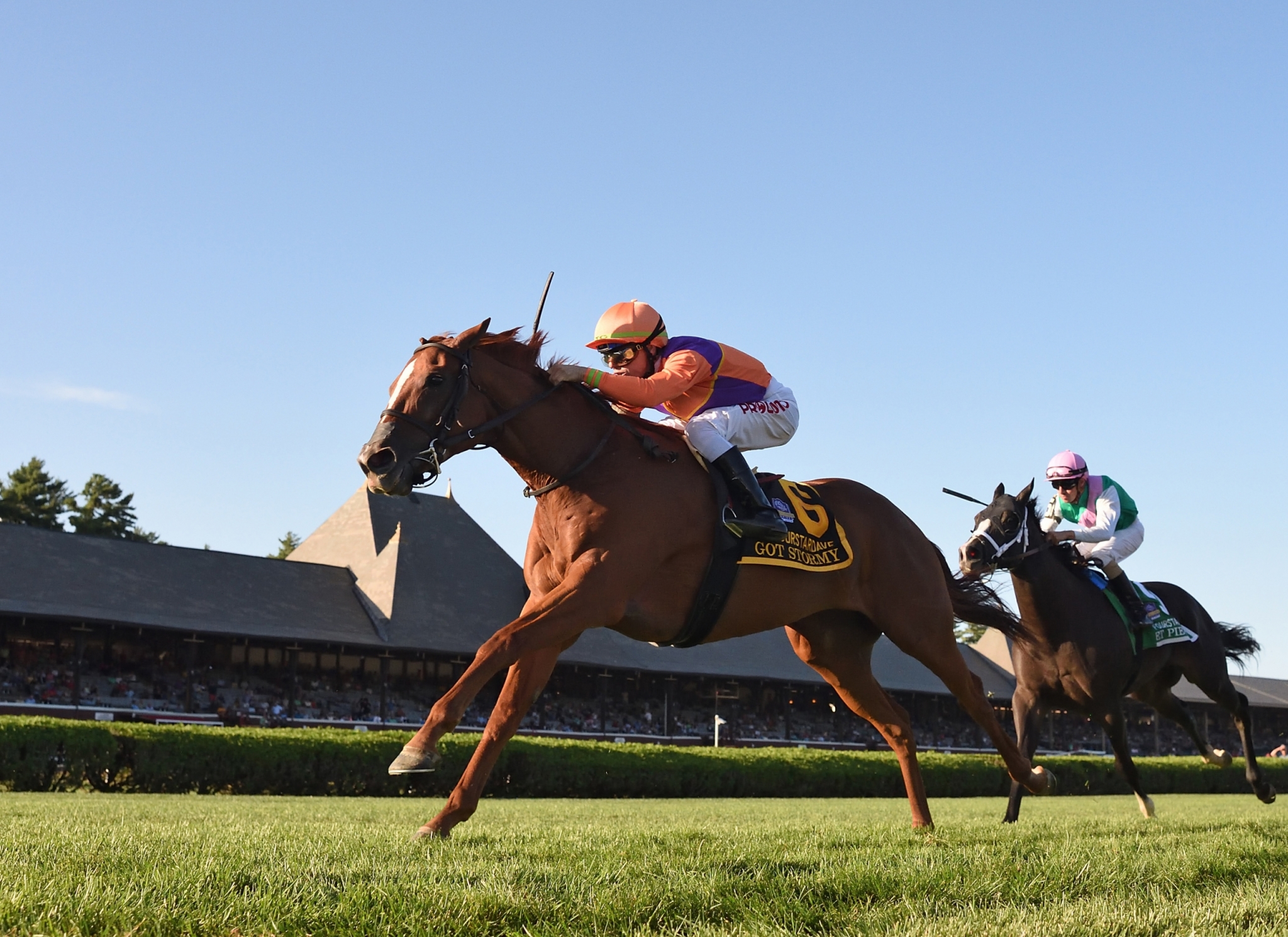 Grade I winners Got Stormy (Get Stormy) and Juju's Map (Liam's Map) put in their final works for their respective Breeders' Cup races at Churchill Downs Friday morning.

MGISW turfer Got Stormy had her final career breeze at 7:30 a.m. under jockey Declan Carroll, cruising a half-mile in :48.60 in preparation for the GI Breeders' Cup Mile.

“We had some rain in the area but the track was really good so I decided to move her work up a day,” trainer Mark Casse's assistant David Carroll said. “Sometimes you see with older mares that they may take a step back from their younger campaigns but she has been doing great. I'm really excited the way she's coming into the Breeders' Cup. She's a very special mare to all of us.”

Got Stormy, along with about 12 other locally-based Breeders' Cup contenders, will ship to Del Mar on Monday.

“Today's work was with an older horse in Matera,” Cox said. “She's a stakes winner in her own right so she's a pretty tough workmate. 'Juju' sat just off her and maybe broke about a length behind. She was well in hand throughout the work and it was exactly what we were looking for at this stage. This filly seemed to improve a little bit since her win in the Alcibiades, which is what these horses need to do this time of year leading into the Breeders' Cup.”

Working toward the Breeders' Cup elsewhere in the country:

“She's outstanding. She looked great and seems to be in really good form,” Pletcher said.

CHC Inc. and WinStar Farm's Life Is Good (Into Mischief), an easy last-out winner of the GII Kelso, breezed a half-mile in preparation for the GI Breeders' Cup Dirt Mile.

“He's an exceptional workhorse and very talented,” Pletcher said. “He did what we've become accustomed to seeing him do, which was put in an impressive move. He did it very easily.”

“It was a good solid work. He seems to have maintained form,” Pletcher said.

“He did really well. He's been training great. I'll get with the Spendthrift guys and make a final decision, but the horse is doing well,” Pletcher said.

Working on Thursday for Pletcher, Bass Stables homebred Annapolis (War Front), a last-out winner of the GII Pilgrim S., worked in tandem with Nest (Curlin), clocking a half-mile in :50.26. Initially targeting the GI Breeders' Cup Juvenile Turf, Pletcher confirmed Annapolis has been sidelined due to a hind ankle chip.

“It's a minor injury and unfortunate timing,” Pletcher said. “We'll look forward to a spring and summer campaign.”

“She worked well [Thursday] morning,” Pletcher said. “It's something we talked about after her debut. When the race came up a little bit of a shorter field, we felt like it was something worth taking a look at. She's a two-turn filly for sure, it's just a matter of if she has enough experience.”

Also working at Belmont Friday, Shortleaf Stable's GIII Matron S. winner Bubble Rock (More Than Ready, conditioned by Brad Cox, breezed a half-mile in :49.09 over the inner turf rated good in preparation for the GI Juvenile Fillies Turf. The homebred was piloted in her breeze by assistant trainer Dustin Dugas.

“I thought her breeze this morning went pretty well. There was just a little bit of give in it this morning and the turf had a nice bounce to it. We were pretty far out there with the dogs out,” Dugas said. “For a filly that's going to be stretching out for the first time, she did it right. She broke away from the pony and threw her ears up and really relaxed around the turn. She had a decent breeze thereafter down the lane and a good gallop out. I was happy with the way she did it.”

Dugas said Bubble Rock will jog one mile Saturday at Belmont before shipping to California Sunday.

Trainer Christophe Clement watched a trio of his Breeders' Cup contingent breeze over the Belmont Park inner turf led by Otter Bend Stable's dual Grade I winning Gufo (Declaration of War), third in the GI Joe Hirsch Turf Classic three weeks ago at Belmont. The 4-year-old completed an easy half in :53.40 in preparation for the Turf.

“He looked good,” Clement said. “It was a lazy work, as usual, but he had a very strong work last week. He worked on his own. It was slow by design, but he looked well. He is very sound and he's ready to go.”

Although Slipstream captured the Futurity, a “Win And You're In” for the five-furlong Juvenile Turf Sprint, Clement is opting for the one-mile Juvenile Turf with the colt.

“He worked on his own,” Clement said. “It was a slow work, but he finished very well and was moving well. He came back in good shape.”

Rounding out his Breeders' Cup-bound team, GISP Pizza Bianca (Fastnet Rock {Aus}) went an easy :54.20 in preparation for the Juvenile Fillies Turf. Owned and bred by celebrity chef Bobby Flay, the took her debut going 1 1/16 miles in July at Saratoga and followed with a runner-up effort in the GI Natalma S. in September at Woodbine.

“She's very fit. She's running a week from today so it was an easy work, a two-minute lick and finished up a bit quicker,” Clement said.

Clement indicated his Breeders' Cup contenders are scheduled to depart on Sunday morning.

“[Their works] were slow by design, especially on the ground which I think it's very soft,” Clement said. “I was happy with all them. We just want to keep them happy and sound.”