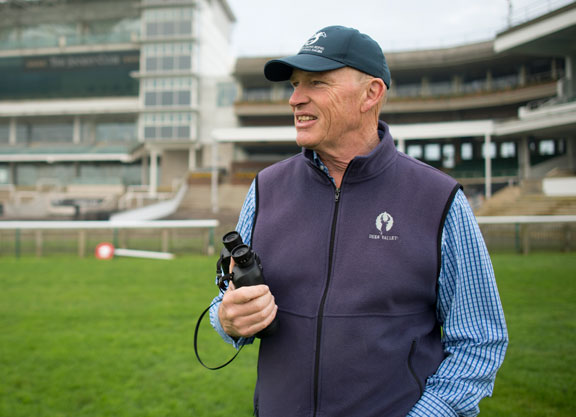 Lord Lloyd-Webber's So Mi Dar shaped with a filly of great promise in the spring, winning the G3 Musidora S. on her third start in May, but missed the summer through injury. She won her comeback race, the Listed John Musker Fillies' S., Sept. 14 before finishing a strong third in the G1 Prix de l'Opera Longines Oct. 2. Gosden noted he would prefer to wait until next year for a transatlantic trip with So Mi Dar.

“So Mi Dar is a very talented filly, but I think at this stage of her career she is like a 16-year-old ballerina and it is too soon for her to be going out there on a very firm, fast track,” he explained. “I've discussed it in depth with her owners, and we are very clear in our mind that it is a year too soon to go for that kind of race on that kind of track.”

“It is no criticism of the track, they only put the course in during the summer and a lot of good friends have told me it's riding like lightning,” he added. “That's it for the year and we will focus on Del Mar and the Breeders' Cup 2017.”

As for George Strawbridge's Journey, winner of the G1 Qipco British Champions Fillies and Mares S. last Saturday, Gosden said, “Mr Strawbridge wants to keep her in Europe; she has just won over a mile-and-a-half at Ascot and coming out of Swinley Bottom is not the same as running down the hill on a flat track over a mile-and-a-quarter at Santa Anita. He is very keen to keep her here now she is flourishing. She will stay in training and be pointed towards the [G2] Middleton. She is only just getting going now she is turning from four to five.”