Goodnight Olive Anything But The 'Pits' In Filly and Mare Sprint 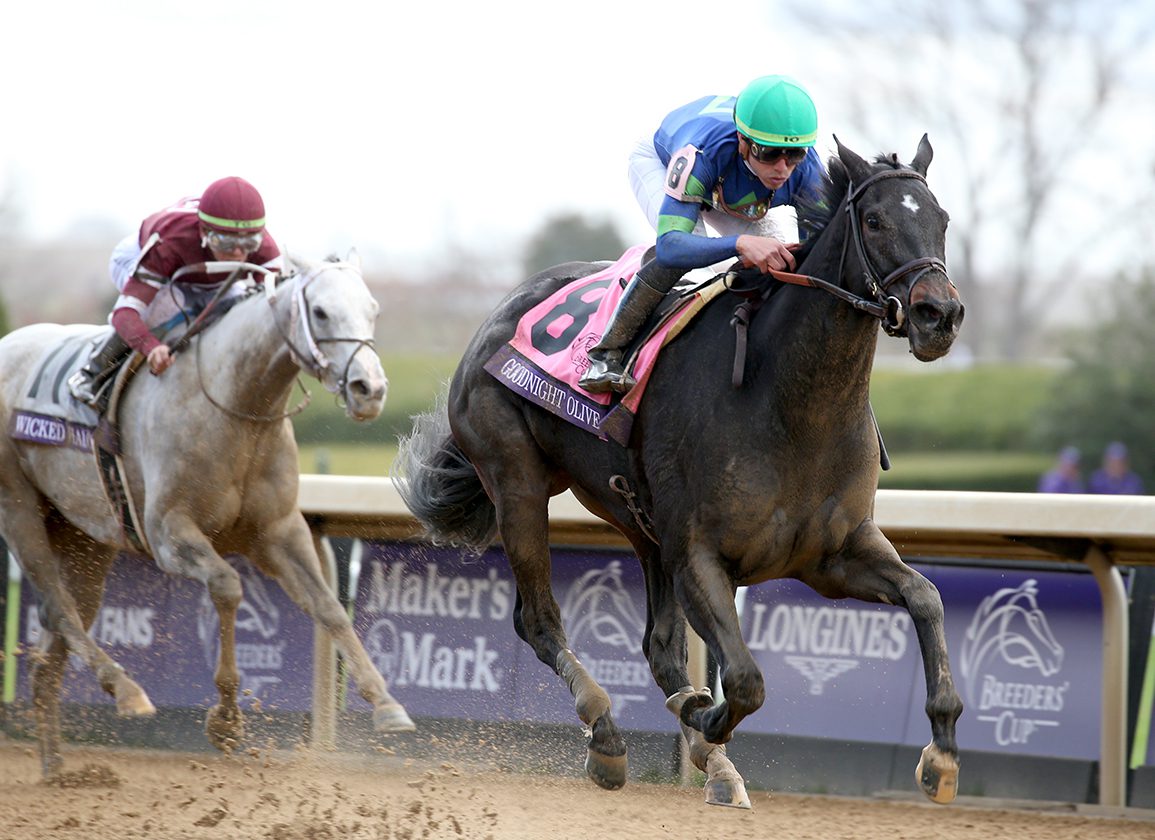 Breeders' Cup Saturday was off to a good start for chalk players, as First Row Partners and Team Hanley's Goodnight Olive (Ghostzapper) gave those that backed her into 9-5 favoritism a few anxious moments when in tight quarters for a few strides, but she launched a well-timed bid three wide into the Keeneland stretch and drew clear as much the best in the GI Breeders' Cup Filly and Mare Sprint.

Away to an almost too-sharp beginning from her middle gate, the $170,000 Fasig-Tipton Kentucky July yearling purchase raced in the second flight of horses as the rail-drawn Slammed (Marking) argued the early pace inside of 2021 runner-up Edgeway (Competitive Edge) through a solid opening quarter of :22.10, with Lady Rocket (Tale of the Cat) and outposted 'TDN Rising Star' Echo Zulu (Gun Runner) on the pace three and four deep, respectively. Taken hold of so as not to run up on the heels of Lady Rocket as they hit the turn, Goodnight Olive still traveled well and was given her cue at the five-sixteenths, just as Echo Zulu was launching a simultaneous bid one path to her outside. Goodnight Olive was kicked into the lead by Irad Ortiz, Jr. outside of a tiring Edgeway with a bit more than a furlong and a half to travel and was not in danger from there, as last year's GI Breeders' Cup Juvenile Fillies heroine closed gamely for second. Wicked Halo (Gun Runner), winner of the GII Lexus Raven Run S. over the course and distance just two weeks back, carved out an inside trip from a high draw of her own and boxed on well to complete the exacta.

Goodnight Olive is the second Breeders' Cup winner for Ghostzapper, whose daughter Judy the Beauty won this event in 2014. It was a second F/M Sprint for Chad Brown, having saddled Wavell Avenue (Harlington) to an upset when Keeneland hosted the Breeders' Cup for the first time in 2015 and his 16th championship victory overall. With the win, Ortiz, Jr. overtakes Jerry Bailey and Joel Rosario with his 16th winner at the Breeders' Cup, good for third-most in history behind Mike Smith (27) and John Velazquez (18).

Goodnight Olive was making just her 10th career trip to the races and has been something of a project for Brown. A wide-margin maiden winner at this track a bit more than year ago, Goodnight Olive romped by nine lengths in an Aqueduct allowance last November before hitting the shelf. Highly impressive in winning her second allowance condition in her first try over this distance in June, she cleared her next level at Saratoga Aug. 7 and was exiting a 2 3/4-length success in the GI Ballerina S. at the Spa Aug. 28.

“With all the stoppages and such, we really utilized her allowance conditions and tried to develop her not throw too much too soon at her,” said Brown. “I think that's why she does have this almost flawless record is just taking it step by step with her.”

“We're so privileged to have a group of guys that–most of my guys have been in the horse business along the way,” Laymon said. “But about five years ago, one of my partners that sits next to me, in the first row at Saratoga, leaned over and said, 'I want to do horses with you.' So I brought two groups together. There's six of us that make up First Row Partners. And we have a wonderful group of guys. And Chad got to know those guys.”

Sensational winner of the 2004 GI Breeders' Cup Classic at Lone Star Park, Ghostzapper has 14 top-level winners, six of which–remarkably–have scored at least one of those victories over the specialist distance of seven furlongs (Guarana, Paulassilverlining, Judy the Beauty, Better Lucky and Nucky). Goodnight Olive is the second Breeders' Cup winner out of a daughter of the late Smart Strike, joining GI Filly & Mare Turf upsetter Shared Account (Pleasantly Perfect).

Goodnight Olive's dam won the 2011 GIII Dogwood S. and 2012 GIII Gardenia S. for Craig Singer and Ken McPeek and was acquired by Stonestreet for $800,000 in foal to Medaglia d'Oro at the 2013 Keeneland November Sale. Salty Strike is a half-sister to SW Salty Response (Cozzene).