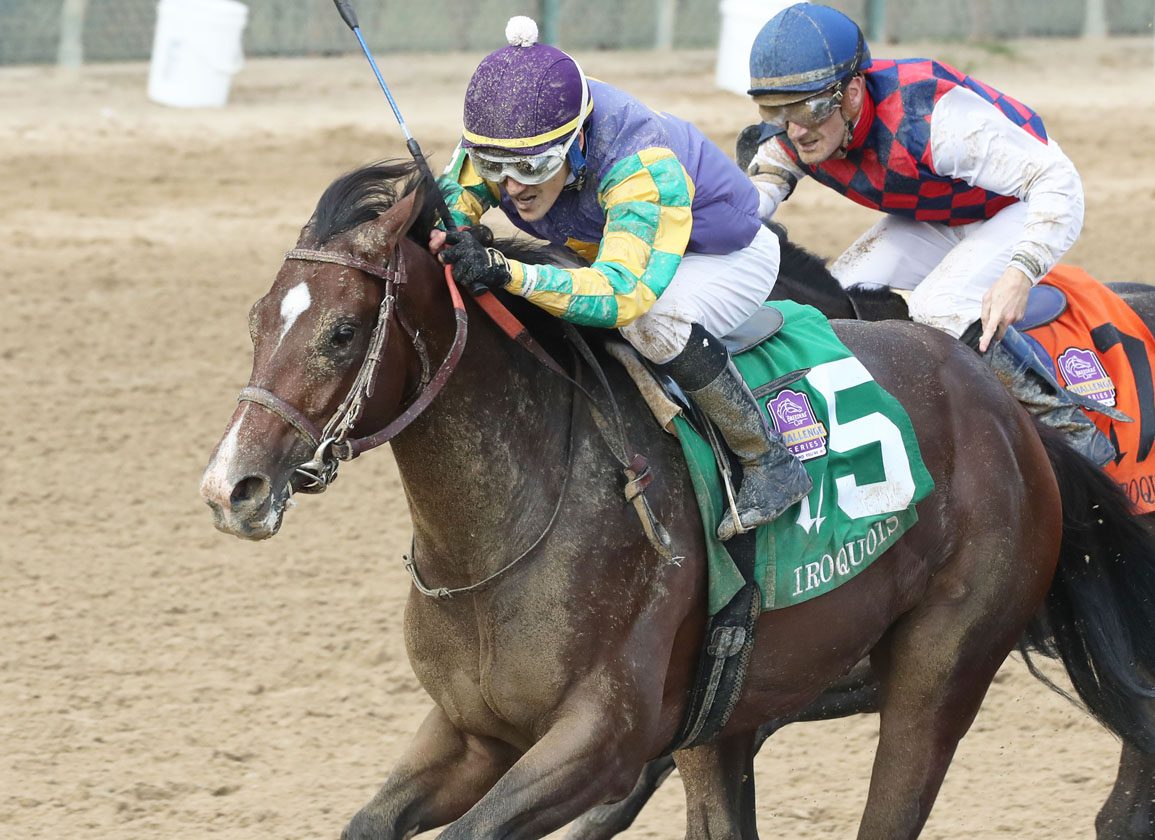 Curly Jack became the second graded winner for his freshman sire (by Curlin) with an upset score in the GIII Iroquois S. at Churchill Downs Saturday. Away alertly, the bay raced off the fence in sixth in a tightly bunched pack as 'TDN Rising Star' and second choice in the betting Damon's Mound (Girvin) clocked a :23.53 opening quarter. Favored fellow 'Rising Star' Echo Again (Gun Runner) charged up to confront Damon's Mound as the half went in :47.48. Curly Jack bided his time as the top two knocked heads on the lead with Echo Again slightly in front. Curly Jack ranged up four wide turning for home alongside Jace's Road. Curly Jack hit the front in mid-stretch and kicked clear with Honed overtaking Jace's Road for second.

“I thought going into this race it was a really good field,” winning trainer Tom Amoss said. “I was able to watch Echo Again this summer at Saratoga and he was very impressive when he won up there. I have a ton of respect for Michelle Lovell's horse [Damon's Mound]. I thought maybe going two turns is going to help our chances.”

“It's very special to win my first graded stakes race for Tom,” winning rider Edgar Morales said. “He's done a great job with this horse and I can't be more thankful to him, his entire staff and the owners for allowing me to ride these really nice horses.”

Curly Jack cruised home a four-length winner in his career bow at Churchill Downs June 2. Fading to fifth in Saratoga's GIII Sanford S. July 16, he missed by a head next out in the Ellis Park Juvenile S. Aug. 14.

Curly Jack is the second graded winner for freshman sire and champion juvenile Good Magic, following GII Sorrento S. victress Vegas Magic. He is out of GI Mother Goose S. runner-up Connie and Michael, who is a half-sister to graded winners High Ridge Road (Quality Road) and Senor Rojo (Out of Place). Already the dam of SP Fannie and Freddie (Malibu Moon), Connie and Michael's most recent produce includes a yearling colt by Gun Runner, who summoned $525,000 from the BSW/Crow colts group on day one of the Keeneland September Sale. She did not have a foal in 2022, but was bred back to Yaupon.