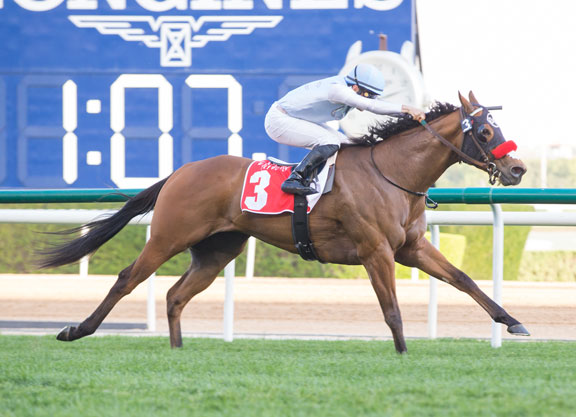 A strong tailwind doubtless helped the lowering of the previous track record of 1:08.24, set two years ago by Godolphin's Jungle Cat (Ire) (Iffraaj {GB}), but this was nevertheless a dominant performance from the lightly-raced 4-year-old, who made almost all the running from a favourable low draw to streak to a 4 3/4-length victory over the Doug Watson-trained second favourite Ekhtiyaar (GB) (Bated Breath {GB}). The outsiders Laeith (GB) (Dubawi {Ire}) and Drummore (Ire) (Dubawi {Ire}), both of whom were also drawn on the far side, filled the minor places. Odds-on favourite Space Blues (Ire) (Dubawi {Ire}), who was returning to the track for the first time since early August last year, was prominent until halfway when he started to struggle and ultimately finished seventh of the 16 runners.

“That was insane. I don't even know what to say,” said the California-based O'Neill, who has experimented this season by bringing a team of 11 horses to Meydan for the duration of the Carnival. “That was so powerful and he looked like a winner very early on in the race. I'm so proud of the whole team surrounding him; Leandro [Mora, assistant trainer] and the crew. I'm now fired up to stay injury-free and go on to the big day. He's always acted special, but you never know how they're going to mature. He's just handled everything like a complete pro.”

Wildman Jack races for his breeder Glenn Sorgenstein's W C Racing, which also part-owned his sire, Spendthrift Farm's Goldencents. O'Neill continued, “Tons of credit to the owner, Glenn Sorgenstein, who is just awesome. I watched it with him while on the phone and he's already packing for the World Cup. He's such a lover of the sport and I'm blessed to have him as an owner. He loves Goldencents and sent me two pictures of two more babies today.”

The gelding, whose previous two victories came at Del Mar last year over five furlongs, had made just one start at the Carnival before Super Saturday, finishing fourth in the Yahsat Trophy over seven furlongs on Feb. 6.

Winning jockey Fernando Jara added, “I was very impressed by him. He was travelling and cantering around and so relaxed. He's so fast and didn't even seem like he was going full speed. He was a different horse today and just got tired going seven furlongs last time. He definitely stepped up today.”

Wildman Jack, who will now be pointed at the G1 Al Quoz Sprint on World Cup night, is out of the Orientate mare Orientatious, who was sold for $20,000 at Keeneland last November carrying a full sibling to the winner. The 12-year-old mare was herself a treble winner and is a half-sister to the stakes-placed Cherokee Path (Cherokee Run) and to the dam of Canadian Grade III winner Calgary Caper (El Corredor). Her third foal, Wildman Jack is her sole winner to date and she has been mated with Goldencents on three more occasions since then, with 3-year-old and 2-year-old colts on the ground as well as a yearling colt by English Channel.