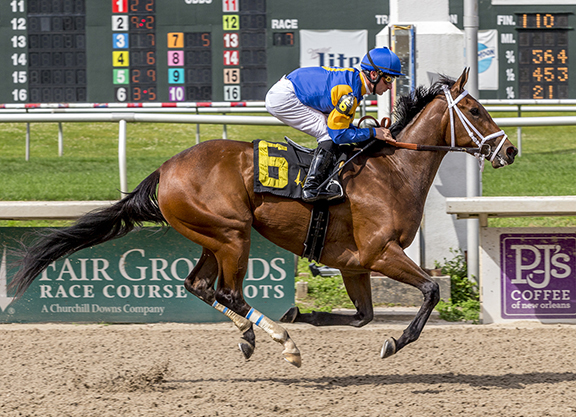 Owner and breeder John Kerber estimates that he purchased his first broodmare in 1960, three years into his tenure as a junior high school science teacher. Some six decades later, undefeated ‘TDN Rising Star‘ Ain’t No Elmers (Goldencents) is the filly the affable octogenarian calls “the one I’ve been waiting for my whole life.”

“At my age, how many more like this can I expect?” wondered Kerber, 83, who resides in the small town of Emmetsburg, Iowa, in the northwest quadrant of the state.

Kerber acquired the filly’s dam, Voussoir (Arch) in 2013 from trainer Mike Johnson, who, according to Kerber, was given the filly by her owner and breeder, the late Charles Cella. On behalf of the former owner of Oaklawn Park, Johnson conditioned Voussoir to a pair of maiden placings as a late 3-year-old at Keeneland and Churchill Downs. While training for a potential 4-year-old campaign in Arkansas, the filly dumped her rider and ran loose the wrong way, cracking a sesamoid. Johnson attempted to bring Voussoir back into training, but those efforts ultimately proved unsuccessful.

Whatever residual value Voussoir retained was enhanced in early 2014 when her year-younger half-brother Drogue (Victory Gallop)–also conditioned by Johnson–upset his higher-profile stable- and entrymate Cyber Secret (Broken Vow) by some nine lengths in the 2014 Fifth Season S. at Hot Springs. At that point, Kerber got busy.

“I had to figure out a way to buy that horse,” he said of Voussoir, who had been sent to Oklahoma. “She was a good-sized mare with a lot of bone and she was everything that I was looking for. She’s very correct–not enormous–but she’s big with good bone. I also liked the fact that she was by Arch, who I think is underrated, and that she showed some ability.”

Kerber continued, “He [Johnson] had gotten a heck of an offer for Voussoir. I offered Mike cash and I told him that I would get the horse home from Oklahoma. I also offered him a bonus in the case that Drogue won a Grade II or Grade III.”

Kerber, who was at one time part-owner with Jack Lohman of Clear Creek Stud in Louisiana, said he gave less than $100,000 for the mare. Though Drogue never made it to the races following the Fifth Season, the mare was attractive enough on paper to get approved for Into Mischief in the spring of 2015.

“I loved that fact that Into Mischief was moving up his mares and I just felt that Arch is such an underrated stallion and broodmare sire. I wanted to get the mare off to a good start,” Kerber explained.

Owner Jeff Bloom, agent, acquired Voussoir’s first foal–a colt–for $75,000 from the Paramount Sales consignment at Keeneland September in 2017. The bay was subsequently bought back on a bid of $220,000 at the Fasig-Tipton Midlantic Sale the following May and has a maiden victory and five minor placings racing as Comedian for Bloom and Madaket Stables and trainer Steve Asmussen.

Kerber bred Voussoir to Goldencents the following spring, but things did not go exactly as planned when she was led over for the 2018 September Sale. Even though the sales sheets indicated that the filly was RNA’d at $37,000, there was not a single live bid on her, according to Kerber.

“That really surprised me,” he said.

Kerber’s one-horse stable, Ain’t No Elmers–co-owned with his wife, Iveta, and Jon Lapczenski–was put through her early paces by the Oaklawn-based Doug Anderson, but she was eventually turned over to trainer Bret Calhoun.

“I wanted her–when she was ready–to be in a place where the purses are good,” he said. “I was going to go to Churchill and now I need to find a trainer. I knew that Bret had success with horses like By My Standards and Mr. Money. So I called Bret–I’d never had horses with him before–but I knew of him. He’s an old-style kind of trainer, he gets results. He’s the kind that is never in a hurry and neither am I. I called and asked if he’d like to have a filly like her and he said, ‘Oh my, yes.'”

Kerber and his wife were in New Orleans for the filly’s first trip to the races at the Fair Grounds Feb. 15.

“When they brought her over into the paddock, just watching her walk around there, she was on her toes and it’s like, ‘I’m over here and aren’t I beautiful?'” he recounted. “The good ones know that they’re good and she definitely does. She comes over there to be saddled and she’s a bit keyed up, but once she gets onto the track, she’s all business. She forgets all the prancing and she’s like, ‘OK, let’s do it.'”

Sent out a 29-10 chance going six furlongs on the Risen Star S. undercard, Ain’t No Elmers validated her owners’ confidence, leading every step of the way to graduate by 6 1/2 lengths. She was pounded into 70 cents on the dollar for her first try against winners at the New Orleans track Mar. 18 and settled off the pace before inhaling her rivals a furlong from home en route to a nine-length tour-de-force while untouched by Adam Beschizza.

Kerber believes his filly can be even better with a stretch out in distance, but he–like many other owners–must wait for a next spot to run, given the paucity of racing currently.

“It’s impossible, it really is,” he says. “She’s got the temperament, she’s sound, she’s got all sorts of ability. I know Bret thinks the sky’s the limit, too.”

Voussoir, the lone mare owned by Kerber, is the dam of a 2-year-old colt by Dialed In and a yearling filly by the Darby Dan stallion.

“The Dialed In colt is a very nice-looking horse. It’s a family deal–I’ve got two daughters, each took a quarter of the colt and my wife and I kept the rest and we have one outside person. The Dialed In filly is the most gorgeous thing I’ve ever raised,” he commented. Voussoir is currently due to Street Sense Apr. 22, carrying a filly, according to Kerber.

John Kerber admits to having “made every mistake there is to make in racing. Big time.” Ain’t No Elmers looks to have the potential to make any such missteps seem downright trivial.