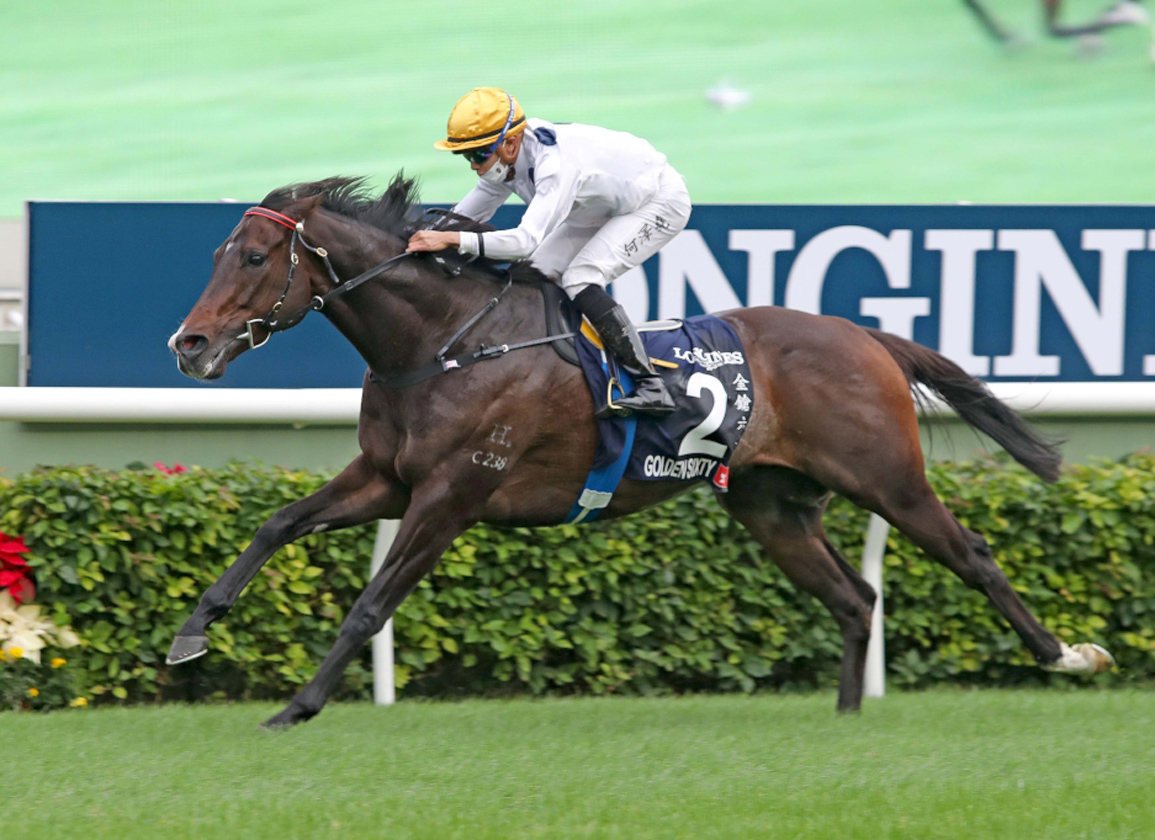 Having secured champion 4-year-old honours in 2019-2020, courtesy of his sweep of the local Triple Crown, Golden Sixty (Aus) (Medaglia d'Oro) capped a perfect 5-year-old campaign by being named the Horse of the Year in Hong Kong during ceremonies held Tuesday evening at Happy Valley Racecourse.

Bred in Queensland by Asco International Pty Ltd., Golden Sixty–an A$120,000 Magic Millions Gold Coast yearling turned NZ$300,000 New Zealand Bloodstock Ready To Run breezer, took his overall winning streak to 14 during the season and to 17 from 18 overall, using his trademark and devastating turn of foot to defeat the evergreen Southern Legend (Aus) (Not A Single Doubt {Aus}) and defending champion Admire Mars (Jpn) (Daiwa Major {Jpn}) for a breakthrough Group 1 success in the Longines Hong Kong Mile in December (see below).

After narrowly besting Southern Legend to win the G1 Stewards' Cup over the metric mile, trainer Francis Lui elected to stretch Golden Sixty back out in trip for the 2000-metre G1 Citi Hong Kong Gold Cup. In a slowly run affair, Vincent Ho set his mount alight three furlongs from home and looped the field, but fellow Derby winner Furore (NZ) (Pierro {Aus}) saved all the ground and the duo battled tooth and nail to the line, with Golden Sixty best by half a head (video). After giving serious consideration to taking on Japan in the G1 FWD QE II Cup in April, trainer Francis Lui stepped his charge back down for the G1 Champions Mile. It proved no easier, however, as his stablemate More Than This (GB) (Dutch Art {GB}) ran him to a head in yet another nail-biting finish.

The lone finalist for champion miler, Golden Sixty was also named champion middle distance horse, earning the nod over Sky Darci (NZ) (Darci Brahma {NZ}). The connections of the latter did not leave Happy Valley empty-handed Tuesday, as they were rewarded for their victory in the BMW Hong Kong Derby with this year's champion 4-year-old prize. The NZ$160,000 NZBJAN graduate won five of his nine trips to the post for champion trainer Caspar Fownes and followed his Derby score with his first open stakes success in the G3 Lion Rock Trophy H.

In what would have been a hotly contested division, Hot King Prawn (Aus) (Denman {Aus}) was named champion sprinter on the strength of a long-overdue first Group 1 tally in the Centenary Sprint Prize in January, with champion jockey Joao Moreira in the saddle. The Torryburn Stud-bred veteran, an A$90,000 purchase out of the 2016 Inglis Sydney Classic sale,  left a pair of potential future champions in his wake, including G1 Chairman's Sprint Prize hero Wellington (Aus) (All Too Hard {Aus}) and the unbeaten Courier Wonder (NZ) (Sacred Falls {NZ}), who debuted–like all unraced newcomers–off a mark of 52 in October and finished on 107 after winning the G3 Sha Tin Vase H. in late May. Courier Wonder was named most improved horse for the 2020-2021 season.

Panfield (Chi) (Lookin At Lucky), a good third to Sky Darci in the Derby, clinched champion stayer honours with his season-ending success in the G1 Standard Chartered Champions and Chater Cup over 2400 metres. The Chilean import could be set for the G1 Melbourne Cup, trainer Tony Millard told the HKJC press team Tuesday.

The David Hayes trained Fantastic Treasure (Aus) (Written Tycoon {Aus}) was unbeaten in five starts, including a Class 2 score in May, and was named champion griffin for horses aged two or three on the date of the first Hong Kong meeting of the season and which were unraced upon their import into Hong Kong.

The final fixture of the 2020-2021 Hong Kong season is set for Wednesday night at Happy Valley. Racing resumes in early September.