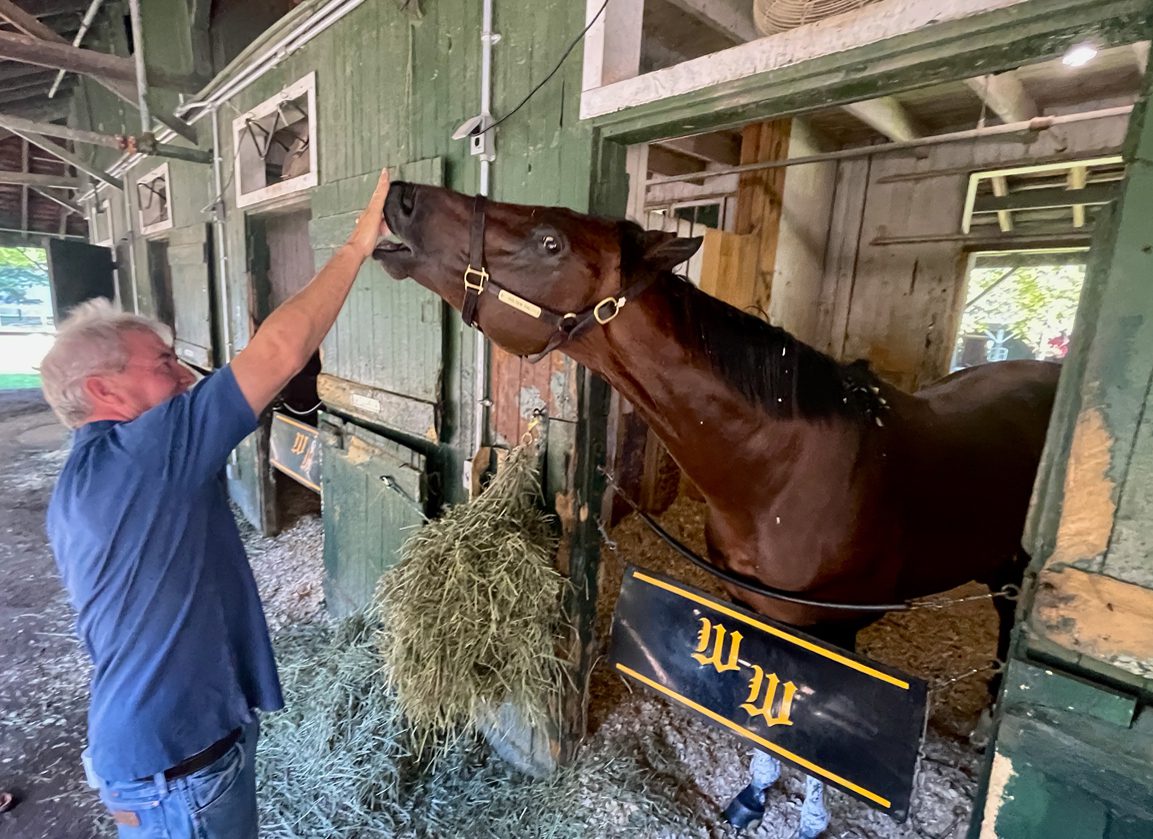 SARATOGA SPRINGS, NY – Before the conversation began rolling, trainer Wesley Ward brought his visitors to Golden Pal (Uncle Mo)'s stall Saturday morning and pointed to the 4-year-old, who was sprawled on his side on the wood chips-covered floor.
Ward chuckled.

“Every day at this time he takes a nap,” Ward said.

Some 10 hours after the two-time Breeders' Cup winner won the GIII Troy S. at Saratoga Race Course, his first start after a rare clunker in the G1 King's Stand S. at Royal Ascot in June, Golden Pal looked like a contented dog resting in front of a fireplace. A few minutes later, he was on his feet checking out what was going on in the shedrow.

Golden Pal didn't need any cheering up after running his record at Saratoga to three-for-three, all in stakes.

The 5 1/2-furlong Troy was the first of Golden Pal's seven career victories in 11 starts that he was not leading at every call. Golden Pal did not leave the gate as sharply as he normally does, but the race scenario played out exactly as Ward had hoped. Under Irad Ortiz, Jr. Golden Pal stalked and pounced, edging pacesetter True Valour (Ire) (Kodiac (GB)) by a head.

Ward has been preparing for the Breeders' Cup during training, having his veteran exercise rider Julio Garcia work him behind horses in breezes. Prior to the Troy, Ward took another step.

“I had a conversation with Irad's agent, Steve Rushing,” Ward said. “I said, 'A lot of jockeys get on my horses, and they just go, because they see me, think speed and they go.' And Irad, the reason I started to ride him is that he would break and do like he did yesterday. Lately, he kind of got a little speedy with some of the horses of mine and I told Steve, 'Look, especially with this horse, let's slow down a little bit, because mine are going to be up in the forefront of the race anyways.' I said, not just him but the others, but especially this one.'”

Ward has called Golden Pal the best horse he has trained and said that the colt's speed is his greatest asset.

“If he contain it, that makes him a better horse,” Ward said. “Because if you're strictly go-to-the-front type horse, you're a victim of the pace.”

Golden Pal is scheduled to leave Saratoga Sunday for Ward's base of operations at Keeneland. The tentative plan is to prepare him to leave the turf, where he has found so much success, and run in the GII Phoenix S. on dirt Oct. 8 at Keeneland. It is intended as a showcase for breeders that he is effective on turf and dirt. He will go on to attempt a second-straight win in GI Breeders' Cup Turf Sprint Nov. 5 at Keeneland, which is expected to be his career finale.

However, if all goes well, Ward said that the Coolmore syndicate that owns the colt might run him in Australia to expose him to breeders in the Southern Hemisphere.

Ward was pleased that Golden Pal showed that he had learned his lessons well in the Troy. Though he is accustomed to seeing Golden Pal leading the way in his races, he said he was always confident that the son of Lady Shipman (Midshipman) would catch the leader.

“I was. It was a nail-biter, but for me, I knew the greatness of this horse,” he said. “Take nothing away from the horse that he beat because he ran a really good race, but I knew when they hit that last little bit of the stretch that the greatness was going to come out of him, and it did.”