Golden Pal Bounces Back in Woodford 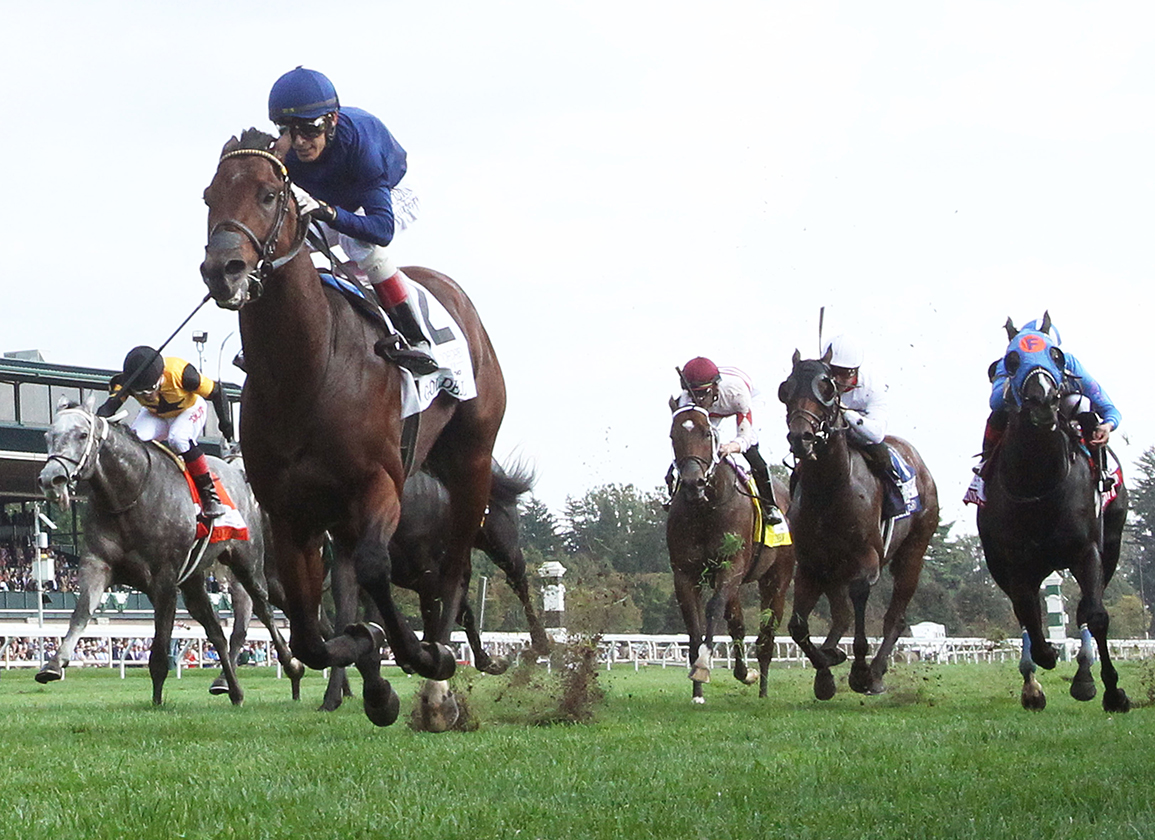 Looking to rebound off a disappointing and well-backed seventh in the G1 Coolmore Nunthorpe S. at York Aug. 20, Golden Pal (Uncle Mo) was made to work for it up front, but he found an extra gear in the final furlong and came away to a relatively easy victory in Saturday's GII Woodford S. at Keeneland.

The 1-2 chalk bounced well from his low gate, but was closely followed by Firecrow (Maclean's Music), who forced the pace through an opening quarter in :21.51. The latter looked poised to strike and was in with every conceivable chance in upper stretch, as too was globetrotting G1 Al Quoz Sprint hero Extravagant Kid (Kiss the Kid), but Golden Pal responded to John Velazquez's right-handed urgings and had something left, drawing away to win by 2 1/4 lengths. Extravagant Kid held for second ahead of County Final (Oxbow) in third.

“He was very game,” Velazquez said. “Before the race–I never rode him so I asked Julio [Garcia, an exercise rider and jockey for trainer Wesley Ward]. He said, 'Just put your hands down and he'll run for you; even if he gets passed he'll run for you.' I left him alone and when [Firecrow] came to him and put the head in front, I was like, 'Hey, we got to come back and run.' I got after him, and he gradually got away from the other horse. It took me two or three jumps to engage him back into the race, and after that he was pretty good.”

A painful second in last term's G2 Norfolk S. at Royal Ascot, the bay earned his diploma in style in Saratoga's Skidmore S., then flaunted his speed with a front-running, tour-de-force victory from post 13 in the GII Breeders' Cup Juvenile Turf Sprint over this same Keeneland turf course Nov. 6. He kicked off his sophmore campaign, sporting the Coolmore silks for the first time, with an easy win in Saratoga's Quick Call S. prior to his aforementioned trip across the pond.

Golden Pal is one of 40 graded winners for his top sire, but is the only one out of a Midshipman mare-two are out of mares by Midshipman's sire Unbridled's Song. He is the lone graded winner from a small number of mares so far for Midshipman.

'TDN Rising Star' Lady Shipman, perhaps among the most talented runners in recent memory to have never won a Grade I-she missed by a neck in the 2015 GI Breeders' Cup Turf Sprint-was also bred by Randy Lowe and he still owns her. She produced an Omaha Beach colt Mar. 24 and is back in foal to Uncle Mo. A Violence half-brother to Lady Shipman RNA'd for $170,000 at Fasig-Tipton July.

For more on Lowe and Golden Pal, click here for a Second Chances column.