Golden Pal Back and Still Brilliant in Quick Call 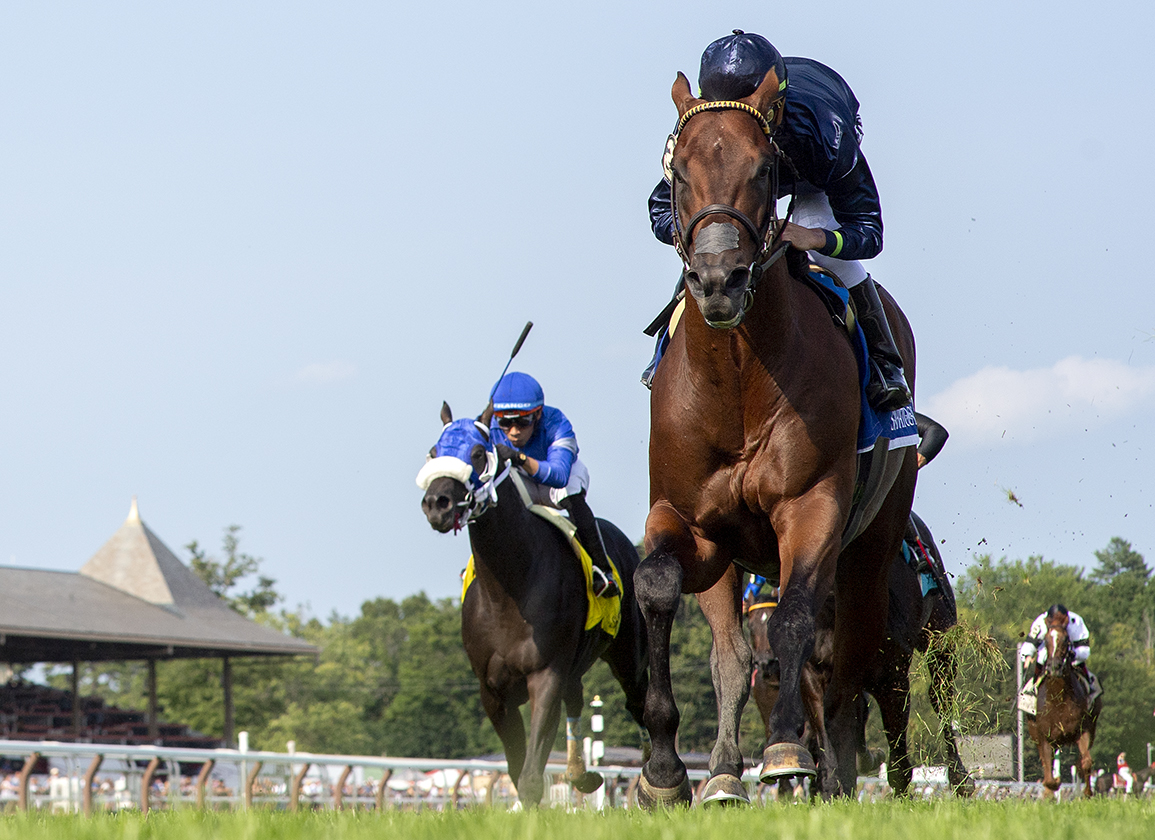 Golden Pal (Uncle Mo), off since a front-running tally in last year's GII Breeders' Cup Juvenile Turf Sprint at Keeneland, returned as sharp as ever to dominate the GIII Quick Call S. on Saratoga's opening day card Thursday. Pounded down to 1-5 favoritism while making his first start since being acquired privately by the Coolmore partners and Georg von Opel's Westerberg from his breeder Randall Lowe, the bay looked like a winner every step of the way, clicking off splits of :21.92 and :44.88 without much company and cruising away to a geared-down three-length victory in 1:02.99 over the good ground. Rank outsider Omaha City (Temple City) spiced up the exacta at 36-1, while 'TDN Rising Star' Jaxon Traveler (Munnings) checked in third in his first turf attempt.

“He's a nice horse,” said winning pilot Irad Ortiz, Jr., who had ridden Golden Pal in both of his wins last term. “I'm happy he came back where he left off. He broke really nice for me. When I asked him, he responded really well. I didn't want to ask too early. I didn't want him to do too much, he's been off for a long time.”

Bought back for $325,000 as a KEESEP '19 yearling, the son of brilliant turf sprinter Lady Shipman (Midshipman) was a close second at 1-2 in his main-track Gulfstream unveiling last April, and missed by a neck in the G2 Norfolk S. at Royal Ascot that June. He broke through by an emphatic 3 1/2 lengths in this venue's Skidmore S. in August, and justified heavy favoritism at the Breeders' Cup, holding on by 3/4 of a length after showing the way.

“He's so extremely talented and quick,” said trainer Wesley Ward. “He's a big horse and he moves like a cat and that's where he really has an advantage. I was a little concerned going into the race that I didn't have a gate work into him, but he's so smart that he overcame that in the first jump. When they said 'go,' he was gone.”

As for the time off, Ward explained, “I like sprinters off layoffs. I think they run their best races off layoffs, more so than the distance horses. I think they need spacing in between because they are so fast and put so much into it, especially the first part of the race.”

Pedigree Notes:
Golden Pal is one of 40 graded winners for his top sire, but is the only one out of a Midshipman mare–two are out of mares by Midshipman's sire Unbridled's Song. He is the lone stakes winner from a small number of mares so far for Midshipman.

Lady Shipman, perhaps among the most talented runners in recent memory to have never won a Grade I–she missed by a neck in the 2015 GI Breeders' Cup Turf Sprint–was also bred by Lowe and he still owns her. She produced an Omaha Beach colt Mar. 24 and is back in foal to Uncle Mo. A Violence half-brother to Lady Shipman RNA'd for $170,000 earlier this week at Fasig-Tipton July.