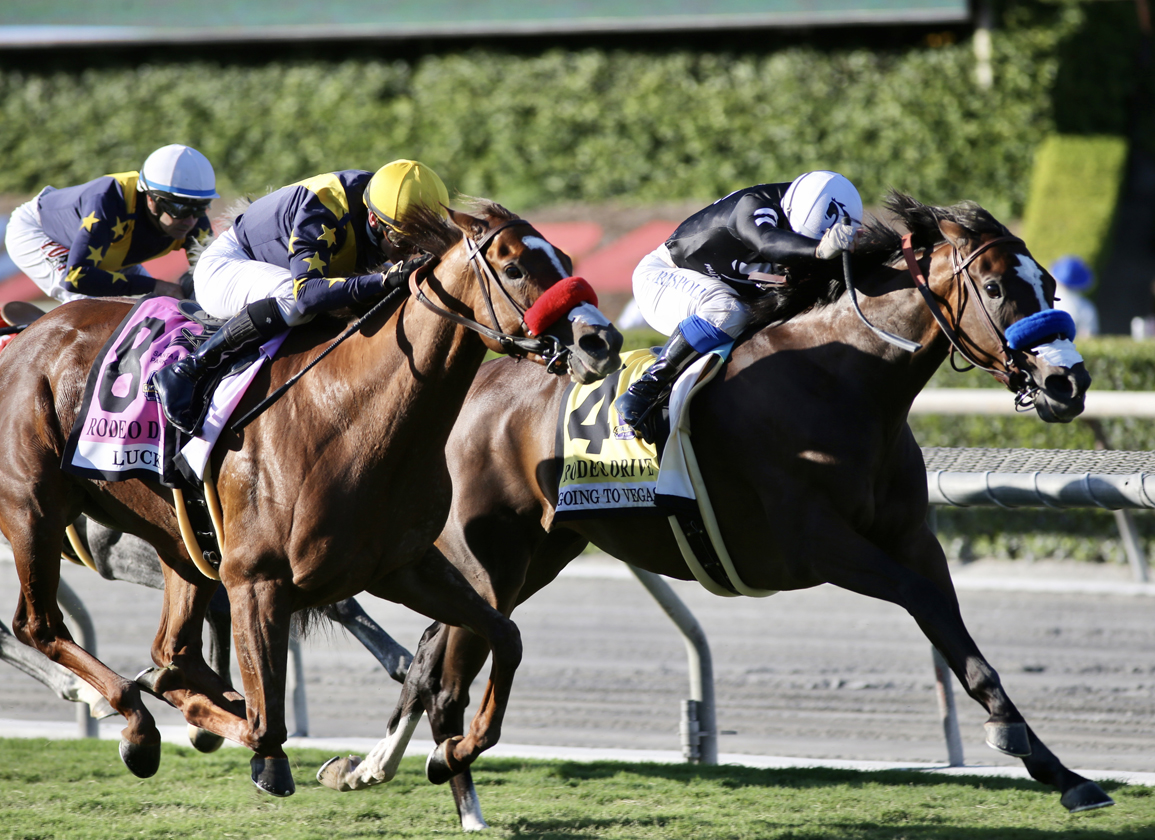 In their respective most recent trips to the post, Going To Vegas (Goldencents) was ridden by Flavien Prat to a popular victory in the GII John C. Mabee S. while stablemate Luck (Kitten's Joy) had Umberto Rispoli in the irons for a first-level allowance tally at Del Mar Aug. 7. The preeminent turf riders on the circuit swapped mounts for Saturday's GI Rodeo Drive S., and at the end of a very entertaining 10 furlongs, it was the Italian and Going To Vegas who proved narrowly best over the French reinsman and Luck, locking up a trip to the GI Breeders' Cup Filly & Mare Turf in the process.

Rispoli, who had ridden Going To Vegas in her three starts prior to the Mabee, kicked the 4-year-old straight into the lead from gate four and controlled the pace through an opening quarter in :24.35 and a steady half-mile in :48.72. Prat had Luck settled worse than midfield and on the back of longshot Rideforthecause (Candy Ride {Arg}), but asked her for some acceleration with a little less than five-eighths of a mile to race after Mike Smith clicked up Red Lark (Ire) (Epaulette {Aus}) to Luck's outside. Luck was all the way up into a three-wide third and within striking distance as they raced around the second turn and the stage was set when Prat asked his mount to take it to the pacesetter in upper stretch. Benefitting from the easy tempo, Going To Vegas responded to his rider's urgings and sprinted the final two furlongs in a slick :22.49 to just hold Luck at bay.

“I'm thrilled with both horses' performances,” said trainer Richard Baltas of the 1-2 finishers. “Going to Vegas has the tactical speed and loves going a mile and a quarter and she showed it. It was a great ride by [Umberto]. My other horse, Luck, really moved up in class. I was really happy with her performance, she really improved in a Grade I, I'm looking forward to the future with her.”

Going To Vegas is not yet nominated to the Breeders' Cup and would have to be supplemented for $100,000.

Claimed from her breeders and trainer Peter Miller for $50,000 out of a victory at Santa Anita in June 2020, Going to Vegas halted a seven-race skid that included four consecutive runner-up efforts with a 3 3/4-length tally in the GIII Santa Ana S. over a mile and a quarter at Santa Anita Mar. 27, with Rispoli at the controls for the first time. An alibi-free fifth to Maxim Rate (Exchange Rate) in the GI Gamely S. in Arcadia May 31, the bay added a popular 3 1/2-length allowance victory at Del Mar July 16 before doubling her graded-stakes grab with a 2 1/4-length defeat of Dogtag (War Front) in the Sept. 4 Mabee.

With the victory, Going To Vegas becomes the first Grade I winner for two-time GI Breeders' Cup Dirt Mile hero Goldencents. Going to Vegas is inbred 5×4 to Storm Cat and is kin to the yearling filly Brand Loyalty (Grazen) and a colt foal by Munnings. Hard to Resist went back to Grazen this past breeding season.