Going, Going, Gone: Knicks Go All the Way in Classic 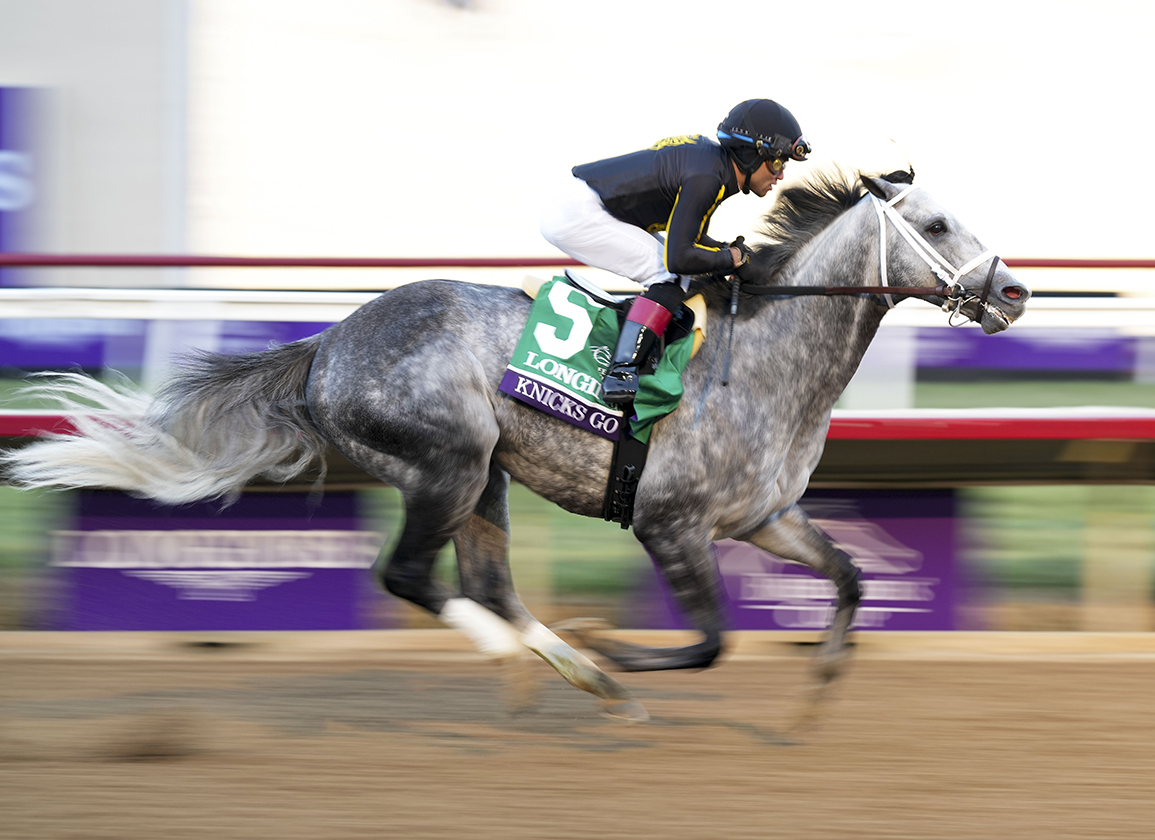 DEL MAR, CA – On paper, the scratched-down field of eight for Saturday's $6-million GI Breeders' Cup Classic appeared to have more than its share of speed to keep 5-2 morning-line favorite Knicks Go (Paynter) company on the front end in his first attempt at 1 1/4 miles. It didn't.

With the sunset providing a magnificent backdrop as the octet left Del Mar's 1 1/4-mile chute, the stunning gray, off as the co-second choice at 3-1, broke like a shot beneath Joel Rosario from post four and quickly was clear passing the wire for the first time to the roar of 26,553.

The Korea Racing Authority colorbearer traveled comfortably through an opening quarter in :23.16 as GI Woodward S. winner Art Collector (Bernardini) chased in second with star 3-year-olds Medina Spirit (Protonico) and Hot Rod Charlie (Oxbow) a joint third rounding the clubhouse turn. Always traveling well within himself, Knicks Go sped to the backstretch through a half mile in a sharp :45.77 as Rosario began to let it out a notch.

Art Collector had enough at this point and Knicks Go enjoyed a two-length advantage on the far turn and cornered to the best part of the track in the four path. Hot Rod Charlie had daylight to work with toward the inside, and the 9-5 favorite Essential Quality (Tapit), just a spot behind him, crept closer as well while Medina Spirit began to wind up widest of all.

Knicks Go was still going plenty strong down the center as they came for home, however, and never gave the star-studded sophomore class a chance, running away to win by 2 3/4 powerful lengths while stopping the timer in an eye-catching 1:59.57.

Controversial GI Kentucky Derby winner and last out GI Awesome Again S. winner Medina Spirit ran a big one to outbattle all of his classmates once again to finish second. It was another 3/4 lengths back to GI Belmont S. winner and 2-year-old champion Essential Quality in third. Hot Rod Charlie was fourth while adding blinkers off his drifting GI Pennsylvania Derby win.

“He ran a tremendous race,” Cox said. “Obviously, the race went really well. He broke and was able to establish position early. Once he was able to do that, he's a hard horse to catch. I'm very proud of him.”

Was Cox surprised to see Knicks Go so free on the lead?

“I kind of felt like if they did try to go with him, they may jeopardize their own opportunity to win the race. Speed's very dangerous and he was obviously fit, ready to run, happy, doing well,” Cox said.

“We had a beautiful trip,” Rosario said. “He does exactly what he wants to do. I tried to save as much as I could, because we had a mile and one quarter to go. But he was going easy. At the quarter pole, he just took off again. He's just an amazing horse.”

It's been a career year for Rosario as he closes in on an Eclipse Award. He also won Friday's GI Breeders' Cup Juvenile Fillies aboard Echo Zulu (Gun Runner).

Knicks Go, previously trained by Ben Colebrook during his two and 3-year-old seasons, won the 2018 GI Claiborne Breeders' Futurity at a hefty 70-1 and followed up with a second-place finish at 40-1 in the GI Breeders' Cup Juvenile.

Transferred to Cox following a disappointing sophomore campaign, Knicks Go was ridden aggressively from that point forward and used his speed as a weapon to spectacular wins in the 2020 Dirt Mile at Keeneland and this term's GI Pegasus World Cup Invitational S. at Gulfstream Jan. 23. Following a pair of disappointing fourth-place finishes in the $20-million Saudi Cup Feb. 20 and the GI Hill 'n' Dale Metropolitan H. at Belmont June 5, he's been absolutely unbeatable since.

Knicks Go got back to his best form returning two turns after receiving a confidence booster when airing in the GIII Cornhusker H. at Prairie Meadows in July with a gaudy 113 Beyer Speed Figure. He entered the Classic off dominating tallies in Saratoga's GI Whitney S. Aug. 7 and the GIII Lukas Classic S. at Churchill last time Oct. 2. For good measure, the runner-up Independence Hall (Constitution) in the latter returned to romp in last weekend's GII Hagyard Fayette S. at Keeneland.

“It had been a rough time when he was three years old, but we overcome the hard year and then turned the corner and then he's become as special horse. And actually winning the Breeders' Cup was the ultimate goal at the beginning of the year and we achieved that win, so he can go off feeling good and we want to say thank you to everybody.”

Knicks Go, slated to stand at Taylor Made upon the conclusion of his racing career, stands alone as the only Grade I winner to date for Paynter, who has four graded winners among his 19 black-type winners. The breeding of Knicks Go has been well-documented, with his dam's last two matings being significantly upgraded: Kosmo's Buddy has a yearling filly by Justify and a filly by Ghostzapper of this year. Ghostzapper, like Paynter, is a son of Awesome Again. She was bred back to Uncle Mo for 2022. Knicks Go, the fifth Maryland-bred generation of his family, is one of 10 stakes winners out of daughters of the Danzig sire Outflanker.

The Moore family's GreenMount Farm claimed the two-time stakes winner Kosmo's Buddy for $40,000 in her penultimate career start at Monmouth in 2010. She RNA'd for $195,000 at the 2018 Fasig-Tipton Kentucky Fall Mixed Sale.

“He's built for American racing on the dirt,” Cox said of Knicks Go. “That's what he's done and I'm hopeful that he'll pass that on to his offspring. I think he's got everything it takes to be a stallion. He's a Grade I winner at two–obviously Ben Colebrook was responsible for that, he did a great job with him. He was a Grade I winner at four and five. He's traveled around the world and he's a very tough, durable horse. He's extremely sound. And I think we're in a day and age where horses go to stud so early and he's a little bit of a throwback horse in that he's raced at four and five and raced as much as he has. So very proud of what he has accomplished and hopefully he'll pass it on as a stallion.”