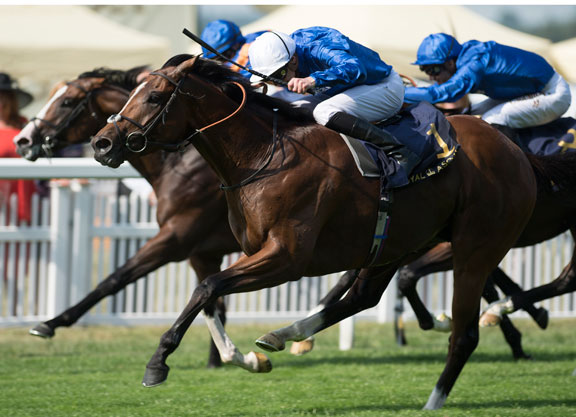 One of the notable lots is a Battlefield Stud-consigned colt (lot 85) by Zoffany (Ire). Out of South African Grade 1 winner Igreja (Arg) (Southern Halo), the February-foaled bay's dam is a full-sister to Argentinean MG1SW Taimazov (Arg).

Lot 101, a son of G2 Cherry Hinton S. heroine Jewel in The Sand (Ire) (Bluebird), who is also a half-sister to German listed hero Davignon (GB) (Highest Honor {Fr}), should also attract some attention. By one of the hottest sires of the moment in Dark Angel (Ire), the bay is consigned by Croom House Stud.

“The stature of the Doncaster Premier Sale has grown significantly in recent years and the 2017 catalogue is without doubt another big leap forward,” said Goffs UK Managing Director Tony Williams. “We have worked hard with consignors over the last few years to develop the quality of yearlings offered and we are delighted and most thankful to those who have entered some outstanding yearlings. The results achieved on the track this season, headed by Group 1 winning 3-year-olds Barney Roy and Harry Angel, are a big boost to this sale's rapidly growing international reputation and are evidence of its ability to produce some of the best horses in Europe.”