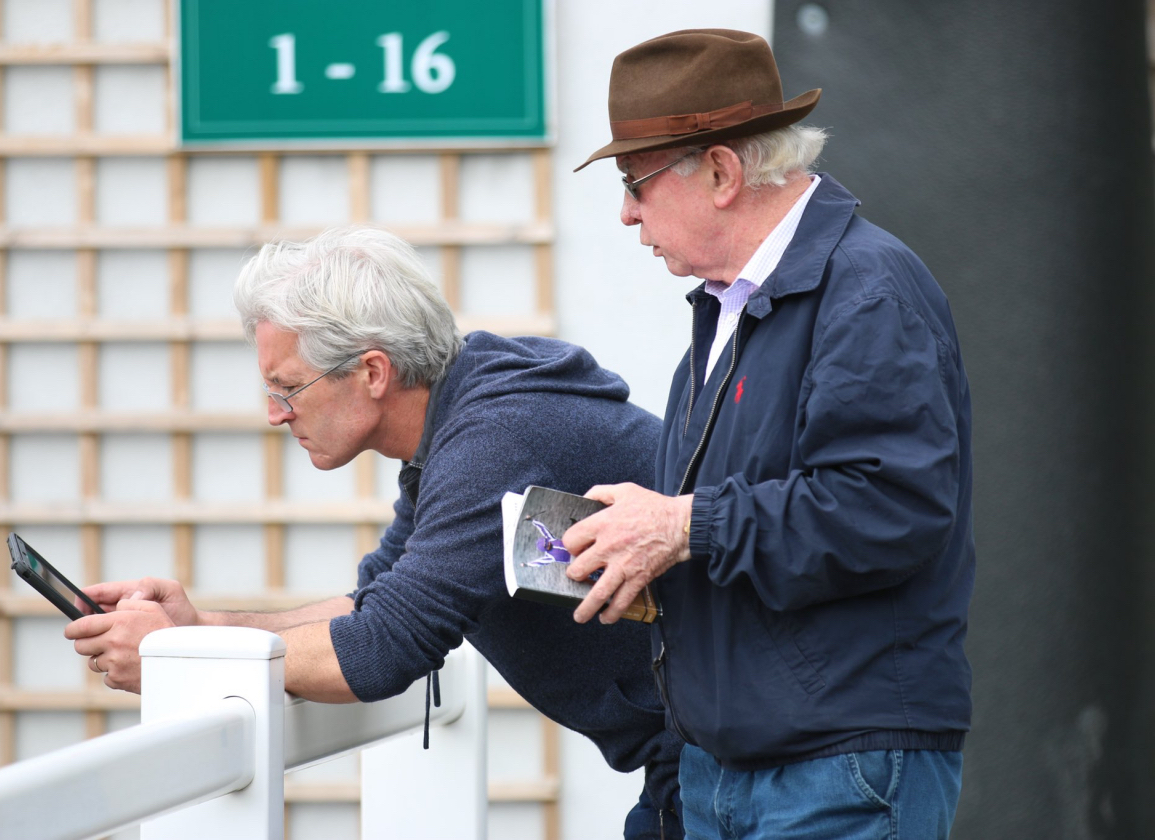 A snapshot of history, that of the Shergar (GB) colt Authaal, takes pride of place on a wall in the bar within the Goffs sales auditorium. Close to four decades have passed since that image was taken of the white-faced youngster and a celebratory Trish Hyde following his sale for Ir3.1 million gns to Tote Cherry-Downes. It had been a record-breaking transaction, a moment of enough consequence to hit the national news, and for vendor Timmy Hyde of Camas Park Stud, one that had repaid handsomely on the colt's Ir325,000gns price tag as a foal.

That Goffs Invitation Yearling Sale of 1984 is a world away from today's bloodstock scene but for some of those concerned that day, little has changed with the passage of time. Just as back then, Camas Park Stud wields a weighty presence at the forefront of the business, whether it be on the track or in the sale ring.

Situated just beyond the Rock Of Cashel on land shared with the River Suir, the stud has been under the ownership of the Hyde family for over 80 years. Its founder, Timmy Hyde, had a very successful career as a jumps jockey, steering Workman (Ire) to victory in the 1939 Grand National and the great chaser Prince Regent (Ire) to success in the 1942 Irish Grand National and 1946 Cheltenham Gold Cup. Equally adept at training, he also sent out Dominick's Bar (Ire) to win the 1950 Irish Grand National.

Son Timmy was also an accomplished jumps jockey, partnering the Duchess Of Westminster's Kinloch Brae (Ire) to win the Cathcart Challenge Cup at the 1969 Cheltenham Festival, before hanging up his boots to develop the family stud into the major force that it is today.

Since then, Camas Park has been associated with numerous big names, among them stars of the 1980s such as Al Bahathri (Blushing Groom {Fr}), Indian Skimmer  (Storm Bird) and Soviet Star (Nureyev) to the likes of Alexandrova (Ire) (Sadler's Wells), Fame And Glory (GB) (Montjeu {Ire}) and Johannesburg (Hennessy) and then more recently Ten Sovereigns (Ire) (No Nay Never), Rekindling (GB) (High Chaparral {Ire}) and Russian Camelot (Ire) (Camelot {GB}).

From an auction perspective, Authaal's sale to Tote Cherry-Downes on behalf of Sheikh Mohammed was the landmark sale-ring moment. Yet that too worked out for both parties with the colt, one of only 35 foals left behind by the ill-fated Shergar, successful in the 1986 Irish St Leger prior to hitting Group 1 heights in Australia.

In another slice of Goffs history, the stud also sold the last Northern Dancer yearling to be offered in Europe for a sale-topping Ir.1.3 million guineas at the 1988 Goffs Cartier Million Sale.

Head to Barn F at Goffs this week and Camas Park Stud, fronted by Hyde and his son Timmy Jr., will be there as it always is, its name at the helm of a sizeable draft that will undoubtedly secure plenty of interest.

It was out of the stud's various Goffs consignments of yesteryear that buyers could have secured the Classic winners Dancing Rain (Ire) (Danehill Dancer {Ire}), the 2011 Epsom Oaks heroine who was bought for €200,000 by Norris/Huntingdon, and Saffron Walden (Fr) (Sadler's Wells), the Irish 2,000 Guineas winner who sold to Demi O'Byrne in 1997.

Like Authaal, Saffron Walden was a Goffs sale-topper, in his case when heading the 1997 renewal at Ir£1.2 million. At the other end of the spectrum, multiple Group 1 winner Grandera (Ire) (Grand Lodge) was secured for just Ir£30,000 by Amanda Skiffington and James Fanshawe in 1999. Breeders' Cup Classic runner-up Toast Of New York (Thewayyouare), a €60,000 purchase by Jamie Osborne at the 2012 renewal, also went on to repay his connections with a flourish.

A good proportion of the Camas Park yearlings on offer at Goffs this year are the stud's own homebreds. A handful of pinhooks are also catalogued while adding further interest is a smattering of horses belonging to the Niarchos family's Flaxman Holdings and Ben Sangster.

It's hard to be confident towards a market that is still battling within the constraints of a pandemic era but against that, heart can already be taken from the way in which various yearling sales have held up this year. Camas Park Stud has not been alone in enjoying a successful sales season to date and hopes remain high within the operation that such positive momentum will carry over into this week's sale.

“We've had a good year, we're very happy,” says Timmy Hyde Jr. “There seems to be a great appetite for horses right now. Whether it's because people haven't been able to spend properly for two years, I don't know, but long may it continue.

“There have been some great results for the sales on the track and not just over here but in the US as well. Saratoga was great for the European horses and hopefully we'll see plenty of American buyers coming over this week.

“There are definitely a lot of people in town. I know there is not a hotel room left in the vicinity, which tells you everything. So the vibes are good. I saw a lot of horses this morning and the standard seems high. It's very important to have the sale in Ireland and I have to take my hat off to Goffs, they have done a lot of work to get people in.”

The reintroduction of a million-euro race, the Goffs Million, also resonates strongly with the team given that the stud sold Rinka Das (Nureyev), winner of the Cartier Million at Phoenix Park in 1990. A forerunner to the current million initiative, the Cartier Million was the richest sporting prize in Europe of its time.

“Goffs had to do something to incentivise people and I know they spoke to a lot of people after last year's sale,” says Hyde. “I think the Million is a good idea, it's definitely a help anyway.”

So are there any potential Goffs Million winners lurking within this year's draft?

Hyde speaks particularly fondly of lot 276, a homebred son of No Nay Never. He is the first foal out of Sweet Charity (Fr) (Myboycharlie {Ire}), a five-furlong French listed winner bought for $250,000 through the BBA Ireland at the 2019 Keeneland January Sale.

Hyde is well placed to appreciate No Nay Never given that he co-bred the stallion's G1 Middle Park S. and July Cup winner Ten Sovereigns in partnership with Lynch Bages and raised him on his Summerhill farm adjacent to Camas Park.

“He's the star of the show,” says Hyde. “It's like Ten Sovereigns all over again. He's a beautiful individual, the right type of No Nay Never, a very good mover and very hard to fault.”

No Nay Never is also sire of a half-sister to the G2 miler True Valour (Ire) (Kodiac {GB}), catalogued as lot 274.

“We also have a very nice filly by Dark Angel (lot 245). She's well put-together and a good mover. Her half-brother Duhail is a Group 2 winner but the 2-year-old out of the mare, Locke (Ire), also won recently at Windsor.”

Of particular interest is the Galileo (Ire) (Sadler's Wells) colt, one of six catalogued within the sale by his late sire. Catalogued as lot 98, the colt was bred by Ben Sangster out of the high-class Lady Lara (Ire) (Excellent Art {GB}), a durable filly whose six wins included the G2 Honey Fox S. and G3 My Charmer H. in the U.S., and listed Dubai Duty Free Cup in Britain. The daughter of Excellent Art (GB)(Pivotal {GB}) was placed on another eight occasions at stakes level.

“I actually bred Lady Lara myself,” says Hyde. “She was the last one we had out of her dam Shanty. I sold her to Alan Jarvis, she did really well for him and then performed to a high level for Ben in the U.S. She was always a lovely looking mare and the colt out of her is very nice.”

The colt's full-brother Changingoftheguard (Ire) has been placed for Aidan O'Brien since the publication of the catalogue.

“The mare keeps throwing good runners and this filly is one of the nicest individuals that she has produced,” says Hyde. “She is a good-moving filly, and the sire is going well.”

Those who have supported U S Navy Flag (War Front) will be hoping that the same words will be uttered towards his first crop by this time next year. The Coolmore stallion has two representatives to fly the flag within the consignment starting with lot 85, a daughter of the Aga Khan-bred listed winner Karasiyra (Ire) (Alhaarth {Ire}).

“She is a really fast-looking filly,” he says. “She's very good-looking, has a good back end on her and a terrific hind leg. From what we have, she's typical of what the sire is throwing. We also have a good colt by him, who was a pinhook (lot 388). I really like what we have by the sire–they look sharp and fast.”

The stud's pinhooks also include a 'good-moving' Lope De Vega (Ire) grandson of German champion Borgia (Ger) (Acatenango {Ger}) bought for €150,000 at the Goffs November Sale and catalogued this time around as lot 383.

The same sire is also represented by lot 161, a daughter of the fast Group 3 winner Only Mine (Ire) (Pour Moi {Ire}). A well-liked filly, she was bred by the Niarchos family's Flaxman Holdings, as is lot 425, a Zoustar (Aus) grandson of Divine Proportions (Kingmambo), and lot 432, a son of Kingman (GB) (Invincible Spirit {Ire}) who descends from Miesque (Nureyev). The Mastercraftsman (Ire) brother to Alpha Centauri (Ire) and Discoveries (Ire) is a late withdrawal.

A qualified vet and former jump jockey, Hyde Jr was at school the day that Authaal went through the ring but well remembers the heightened outside media interest that accompanied the colt's sale.

However, the day that Grandera went through the ring 15 years later evokes memories of a different kind.

“We actually couldn't sell Grandera in the ring,” recalls Hyde. “He twisted a shoe off in the outside ring just as it was his turn to go in, stepped on it and hopped around the sales ring on three legs–it couldn't have been worse timing.

“But Amanda Skiffington and James Fanshawe had liked him and our head man at the time, Edmond Ryan, got them to come back down to the yard and we sold him afterwards to them for €30,000.”

Grandera turned out to be an excellent purchase, winning a listed race and running Group 1-placed for Fanshawe in the colours of Lael Stable before selling to Godolphin, for whom he won the G1 Irish Champion S. and G1 Prince Of Wales's S.

Rarely has a year gone by since then when a classy graduate hasn't emerged out of Camas Park Stud. With that in mind, chances are that another one will do so out of this generation.