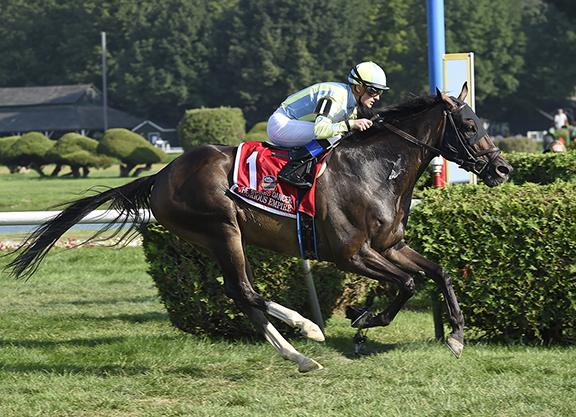 Glorious Empire pulled off the 22-1 upset in this venue's GII Bowling Green S. July 28, and fooled the bettors once again under another aggressive Julien Leparoux ride. Hard-sent from the fence to seize the early advantage, the well-traveled 7-year-old was on his own up front through an opening quarter in a swift :23.16. Able to slow it down from there while traveling with a low head carriage, he posted splits of :48.18, 1:13.88 and 1:38.82 with Channel Maker next in line. Channel Maker ranged up on even terms with the leader heading for home, but Glorious Empire hit another gear and quickly opened back again to win with room to spare.

“It was a rough race, like the last time. He obviously loves the track,” Leparoux said. “We won two here this year and one last year. The first quarter was fast, but today he settled very nicely and picked the pace up pretty quickly.”

Glorious Empire began his career in Great Britain, and was a winner from two starts in Hong Kong in 2015. He eventually made it to the States and into the Tom Morley barn, but was claimed by trainer Carlos Martin and Matthew Schera from owner P. K. Siu for $62,500 last May. He promptly romped at 9-1 in a $50,000 claimer here that July, but failed to lane a blow in two subsequent Grade II attempts. Resurfacing off the trainer change to be sixth in Laurel's Henry Clark S. Apr. 21, he dominated a Delaware optional claimer June 28 before returning to the Spa for the Bowling Green.

“I'm trying to get my voice back,” said trainer James “Chuck” Lawrence, who was celebrating his first Grade I victory. “We knew this horse had this kind of talent, it was just a matter of getting it to come out, so here we go… I thought the 23[-second] quarter[-mile] got us, but then he really slowed it down for Julien [Leparoux], luckily… When he slowed it down, I was pretty happy and I just kept yelling throughout the turn, 'Julien, let him go, let him go.' I knew he was fit, it was just a matter of getting the wire to come fast enough. He responded at the top of the lane. That was really special.”

Glorious Empire stamped his ticket to the GI Breeders' Cup Turf with Saturday's win, and Lawrence confirmed a trip to Churchill Downs would likely be the long-term goal going forward.