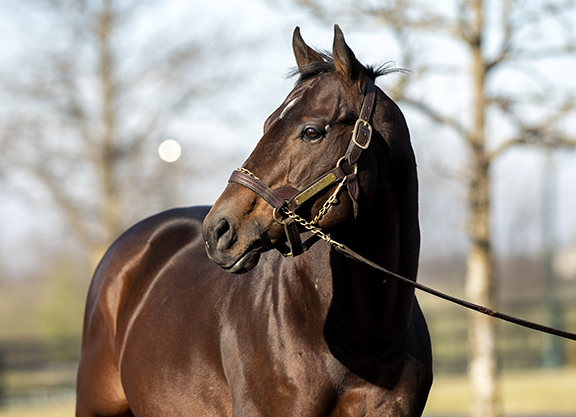 With 18 stallions already standing at stud, WinStar Farm already had one of the largest stallion rosters in Kentucky, but they will be busier than ever in 2021 after having welcomed five new recruits for the upcoming season. Laoban (Uncle Mo) will stand his first year in Kentucky after becoming a Grade I-producing sire this year, while Grade I winners Improbable (City Zip) and Promises Fulfilled (Shackleford) will start off their career at the Versailles farm.

Today, we speak with WinStar's General Manager Dave Hanley on Global Campaign (Curlin) and Tom's d'Etat (Smart Strike), who round out the list of new additions and who both rank among the top earners for their respective trainers.

While it would be difficult to top the career of Horse of the Year Blame, Tom's d'Etat comes close as trainer Al Stall Jr.'s next-highest earning Grade I winner.

“You could tell by listening to Al that he had really high regard for Tom's d'Etat,” Hanley said. “He's the coolest horse to be around. Really laid back with the most beautiful head and demeanor about him. I think he's got a lot of class. You know, Al had trained Blame, but you could tell Al really loved this horse.”

Tom's d'Etat was a $330,000 Keeneland September buy for Gayle Benson's G M B Racing. From the family of top sire Candy Ride (Arg), the SF Bloodstock-bred son of Smart Strike is out of stakes winner and Grade III-placed Julia Tuttle (Giant's Causeway).

Hanley said that in terms of conformation, Tom's d'Etat is a reflection of both Smart Strike and Candy Ride.

“He's put together much like his sire and also has a little bit of Candy Ride in his make and shape,” he said. “He's a beautifully balanced horse in that everything works for him. He's got great use of his shoulders and carries his head and neck in a good position. He's a beautiful mover and really opens his shoulder when he moves. His mechanics work really well and when he's galloping, you can see what good use he has of himself.”

On the track, Tom's d'Etat broke his maiden at Saratoga as a sophomore before adding four more wins in optional claimers at four and five. Stepping up into stakes company, he won the Tenacious S. at Fair Grounds to cap off his 5-year-old season.

After running second to four-time Grade I winner McKinzie (Street Sense) in the GII Alysheba S., the fleet-footed bay added the Alydar S. at Saratoga to his resume last summer as he reached top form. WinStar started to take notice of the stallion prospect.

“From May of 2019 to August of 2020 he ran nine-straight triple digit Beyers,” Hanley said. “He was such a dominant racehorse and was so talented, he really took our attention.”

His next win came in the GII Hagyard Fayette S. at Keeneland, his first graded stakes success, followed by his signature Grade I victory in the Clark S.

“His win in the Clark was another example of one of his dominating performances,” Hanley said. “He sat mid-division and then made an unbelievable move. He didn't just go to the front, he flew.”

After defeating Improbable (City Zip) in the Oaklawn Mile S., Tom's d'Etat added another win in the GII Stephen Foster S. where he earned a career-best 109 Beyer and just missed the track record by 0.02 seconds.

“It was quite a brilliant performance,” Hanley recalled. “Actually, he was eased down that day. Had they ridden him to the line, he might have even broken the track record.”

After two troubled trips in the latter half of his 2020 season in the GI Whitney S., where he still fought to finish third, and the GI Breeders' Cup Classic, Tom's d'Etat retired with earnings of over $1.76 million, having run in the money in all but five of his 20 starts.

Hanley said that their team is not at all phased that Tom's d'Etat retires at the age of seven. It's not their first time retiring older horses to stud.

“Some people are against that or think it's a disadvantage to him,” Hanley said. “But you know, we've had two very good horses go through our stud barn here in Speightstown and Distorted Humor that both came to stud at age six and stood their first year as 7-year-olds. So, it doesn't bother us at all. I think he's going to be a good stallion regardless. Tom's d'Etat's pedigree is really stacked with sire-making potential. We're going to support him really well together with our shareholders like Fred Hertrich, Siena Farm and Taylor Made. We really believe in his chance of becoming a top stallion.”

“Global Campaign is probably the best-bred son of Curlin,” Hanley said. “He's a very good-looking horse for his sire line. He has very clean lines and is a smooth horse. He's beautifully made, very well proportioned and is a really good mover. It's hard to fault him. He's a really exceptional physical.”

The WinStar-bred was a $250,000 Keeneland September purchase for Sagamore Farm and was given to trainer Stanley Hough to race in partnership with WinStar.

“About a month before the September Sale, he got a bang on his knee that fired up physitis in the knee,” Hanley said. “So going into the sale, I think that took a number of people off him. But we really liked him and were anxious to stay in for a piece. Stanley Hough and Hunter Rankin were very gracious to allow us to do that.”

Global Campaign was sent to Ocala Stud to undergo training, and Hanley said he remembers visiting the youngster.

“Elliott [Walden] and I went down in the spring of his 2-year-old year and they were already excited about him,” he said. “He was starting to separate himself from the others and they thought he was one of the nicest horses they had down there. He was a beautiful mover, a very positive horse in his work, and looked like he was going to be something.”

In January of his sophomore season, the colt turned heads on debut when he broke his maiden by almost six lengths and then earned 'Rising Star' status in his next start. Later in the season, he defeated eventual GI Belmont S. winner Sir Winston (Awesome Again) in the GIII Peter Pan S. followed by a third-place effort in the GII Jim Dandy S.

“Unfortunately in that race, he grabbed himself coming out of the gate and took a chunk out of his heel,” Hanley relayed.

After a nine-month layoff, the bay returned with a victory at four in a Gulfstream optional claimer before stepping back into graded stakes company and taking the GIII Monmouth Cup S.

“He made the running and had his ears pricked in front,” Hanley recalled. “The other horse, Bal Harbour (First Samurai), went to go by him and he just rallied and put the race away. He was the kind of horse that I think always ran with a bit more in the tank than you saw. He's a horse that liked to get on the front end, relax, and could finish up really well.”

Global Campaign made his Grade I debut this summer in the Woodward H., breaking first and never looking back to defeat the likes of Grade I winner Math Wizard (Algorithms) and multiple graded stakes winner Tacitus (Tapit).

He earned a career-best 106 Beyer in his final start this year, fighting to place third after a troubled start in the GI Breeders' Cup Classic behind Horse of the Year favorite Authentic (Into Mischief) and fellow WinStar studmate Improbable.

Hanley spoke about the meaning the horse had for his connections in taking co-owner Sagamore Farm on their probable final trip to the Breeders' Cup as they phase out of racing and becoming trainer Stanley Hough's leading earner.

“It was really nice for Sagamore to have a really good horse like him as they get out of the business,” he said. “Both Hunter Rankin and Stanley Hough did a marvelous job managing the horse. Stanley is a real all-time horseman and you could tell being around him how excited he was about this horse.”

While WinStar had initially announced that they were considering pointing the Grade I winner towards the GI Pegasus World Cup Invitational S., they later decided that he would not resume training following the Breeders' Cup.

“When we took him back to the farm, he was going down so well with the breeders and looked so good,” Hanley said. “We're very happy that he's here. He's been very, very popular. I think he's already booked to 80 mares and people really like him.”