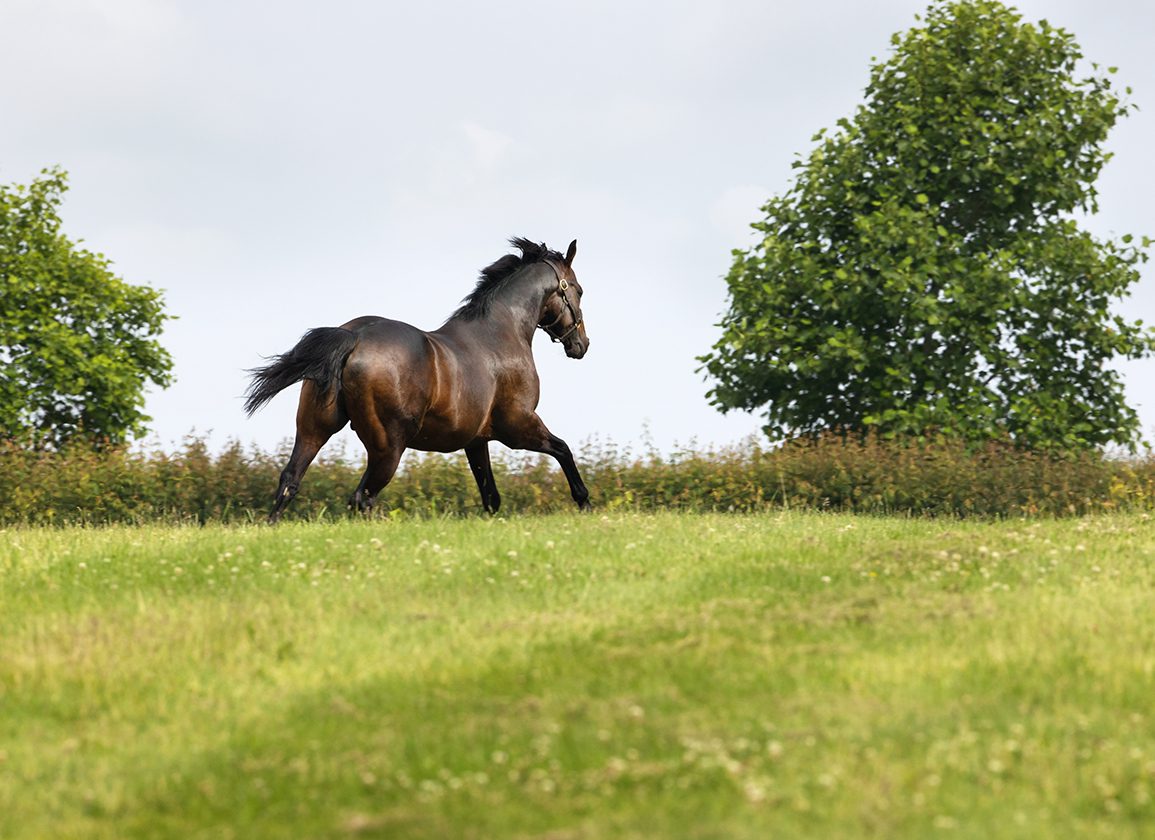 Next week, the first yearlings by Darley's dual champion Too Darn Hot (GB) will be offered for sale at the Arqana August Yearling Sale. Expectations were always going to be high for Too Darn Hot–a son of sire of sires Dubawi (Ire), out of the triple Group 1-winning mare Dar Re Mi (GB) (Singspiel {Ire}), from the deep family of the prodigious sire Darshaan (GB). An undefeated champion at two who repeated as champion at three, he also achieved the best foal sales average of 2021.

But uniquely, it will not just be observers in Europe taking careful notice of his yearlings' performance in the ring, but several in America as well, where breeders and investors are noting the traits that make for a successful sire in the New World as well as the Old.

The Arqana group includes four fillies selling on Saturday Aug. 13, the first day of the sale: lot 3 for Ballylinch Stud, a filly out of the graded-stakes-placed Janicellaine (Ire) (Beat Hollow {GB}); lot 29 for Ecurie des Monceaux, a filly out of the listed and group-placed Lida (Ire) (Lope De Vega {Ire}), from the family of Wootton Bassett (GB); lot 66 for Haras du Cadran, the second foal from the multiple-group stakes winner Night Music (Ger) (Sea The Stars {Ire}); lot 90 for Monceaux, a filly from the family of Group 1 winners Persian King (Ire) and Planteur (Ire); and one colt on day two of the sale, Monday; lot 220 for Baroda Stud, out of listed stakes winner and multiple group-stakes placed Bastet (Ire) (Giant's Causeway), and a half-brother to the Group 1 winner Beauty Parlour (GB) (Deep Impact {Jpn}).

Lane's End Farm's Bill Farish said he was so impressed with Too Darn Hot that he invested in the stallion upon his retirement.

“Too Darn Hot is a very exciting stallion for a lot of reasons,” said Farish. “I think he would work well over here in America, mainly because he had so much speed. He was a seven furlongs-to-a-mile Dubawi, which is pretty rare. Usually, they're middle distance to stayers. And, being a Mr. Prospector-line stallion, he just really appeals to me for this market.”

American-based breeder Tanya Gunther said she bred two mares to Too Darn Hot in his first year at stud, and has sent several back since. “Smart Change was the first; she's a daughter of Smart Strike from the Without Parole family,” she said. “We thought with Mr. Prospector and the speed that can come from Smart Strike that it would be an interesting mating. The other mare was a nice, well-bodied mare that we thought would suit him physically as well as on paper. 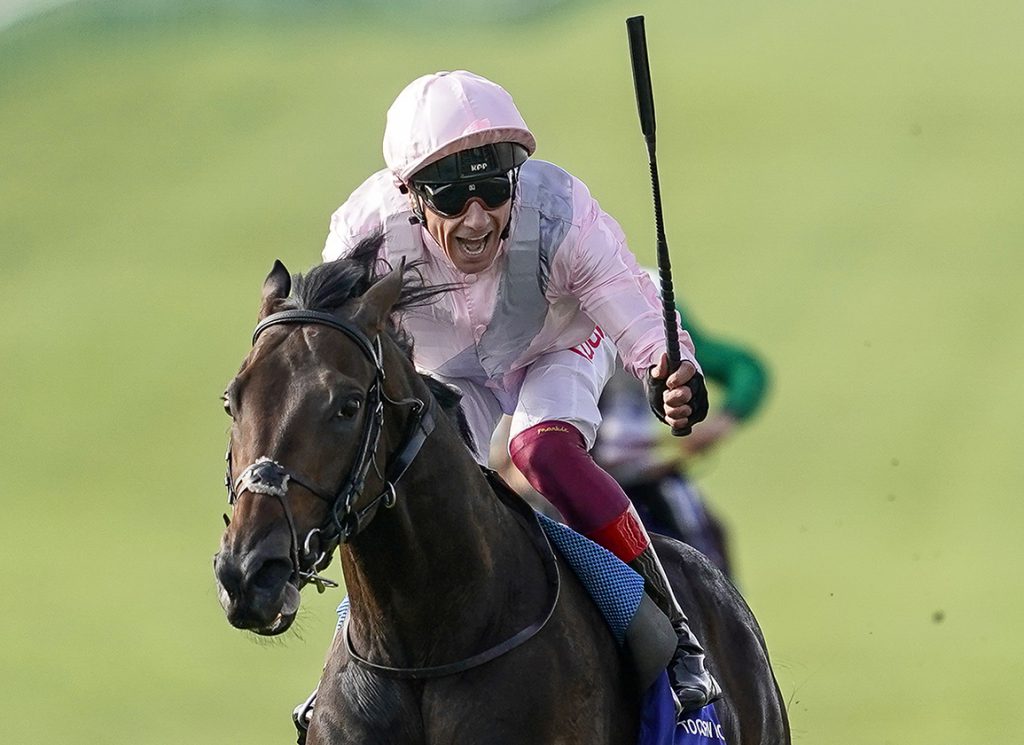 Frankie Dettori celebrates at the finish of the Darley Dewhurst Stakes at Newmarket October 13, 2018 | Photo by Alan Crowhurst/Getty Images

“In the two yearlings, you can really see a bit of a stamp from Too Darn Hot. They're just very athletic. One is a late foal, but super athletic and looks precocious. The other one was an earlier foal and very tall, leggy, just an exceptional individual. And one thing I see in both of them is a lot of class and quality, so that made us very excited. We've sent a mare back again, and a couple of mares back this year as well. One of those mares is a half-sister to Westover (GB) (Frankel {GB}), who had a very good year so far, and people will have seen him on t.v. So we're excited about the mares that we bred to him and the offspring that we've had so far and that we are expecting next year.”

“I followed him very closely from his first race on because we're close friends with the Lloyd- Webbers and with Simon Marsh,” said Farish, “so he was a horse I was particularly paying attention to. And, being an undefeated 2-year-old Group 1-winning champion, and being a champion at three, with his pedigree, he really checked so many boxes for us that we actually bought a breeding right in him when he retired. That's how much we thought of him. And we just we rarely ever do that with a European stallion.”

Lexington-based bloodstock agent Mike Ryan has bred to Too Darn Hot, and bred his same mares back to him a second time.

“I'm upset with myself that I didn't breed to him in his first year,” said Ryan. “I was asleep at the wheel. I bred two mares to him his second year. One aborted, and I have nice foal from the other.  She is back in foal to him. She has a filly foal by her side and the mare that lost her foal is also in foal to him.”

Ryan said he liked what he saw on the track, as well as what he's seeing from his offspring.

“Too Darn Hot was a brilliant 2-year-old,” he said. “He was undefeated at two, showed a lot of precocity, and he was champion 2-year-old. He carried on his class and ability as a 3-year-old. He had great acceleration, which we need in American racing. He had very good tactical speed. You could put him anywhere in a race. He is a lot like Kingman (GB): brilliant speed, brilliant acceleration, fast-ground horses. And I'm hoping he's the next Kingman and that we can go over there and afford to buy some and continue to breed to him.”

Said Farish, “The ones I've seen are look a lot like him. They're very typey, very attractive. Very attractive heads and very correct. I remember when they first bought Darara, the second dam, and she was very well-conformed, very straight-legged. And he's a more sprinter-miler looking than some of the rest of the family. But they've all been very good looking and very correct.”

“He's a magnificent-looking horse,” added Ryan. “Beautiful quality, great shape, oozes presence and class. And I understand his foals are very, very nice, very much like him.”

Both American-based breeders said that the early support he has received from Watership Down, who bred and campaigned him, and from Darley, would prove critical to his success. 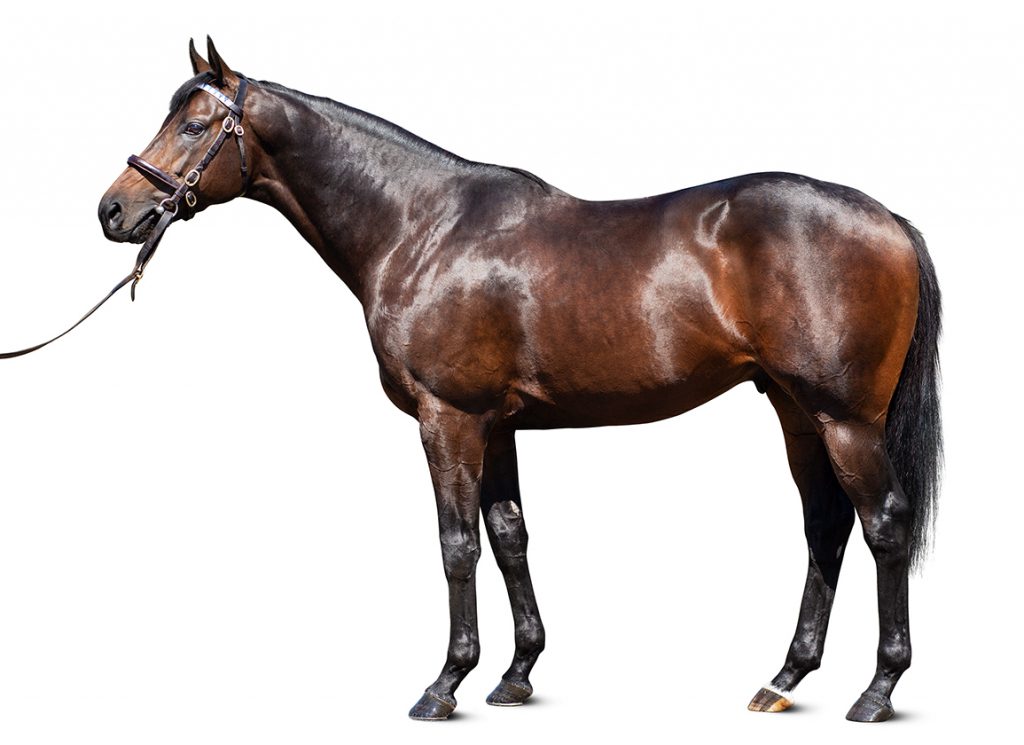 “He stood at a high early stud fee (£50,000 in year one and £45,000 in year two), and if he can stand for that and consistently get full books, it's a testament to how popular he is over there and how well Darley and Watership Down have supported him,” said Farish. “He's just got every chance. You know, he's not only had four books in the Northern Hemisphere, but also down in Australia as well.”

“Too Darn Hot got tremendous support from both Godolphin and Watership Down, who bred and raced him,” Ryan agreed. “It's a huge leg-up for a young horse to get the backing of those kind of mares, and it gives them every chance to succeed in his first and second crops, which is hugely important. Much like Frankel and Kingman–Juddmonte supported both those stallions very heavily. And we see the results today. They are two of the top stallions in Europe. So you can't do better than that. It's up to the horse then himself to see if he can do it.”

“Everybody always talks about checking all the boxes,” Farish added. “Well, he really does check all the boxes. He was a champion at two and three, he was speedy, has a great pedigree. You just can go on and on about all of his qualifications and that's the best you can do is to have all those things covered. And he really does.”

“I think he's one of the most exciting young stallions in the world, not just Europe,” Ryan concluded. “He's beautifully bred. He's got a tremendous race record. He has every qualification that you would look for in a young horse. I think the sky's the limit for him.”

At 20 years old, the race is on to find Dubawi's heir apparent at stud, and Gunther said that with any luck, Too Darn Hot may well fill that role.

“When we went to see him at the stud, when he retired to Darley, he was an impressive individual, particularly in that he took after his father,” she said. “You like to see a bit of the sire in his sons.  I think the hopes would be very high that Too Darn Hot could potentially be his successor.”