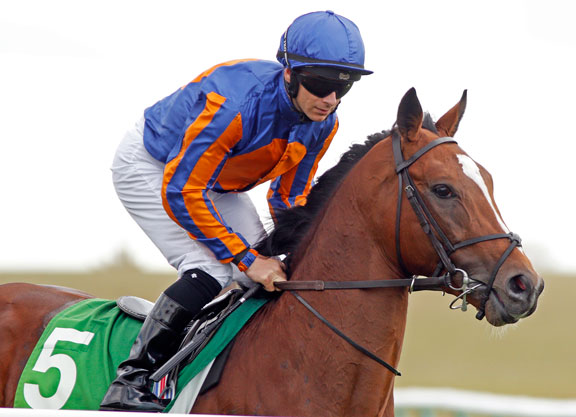 The outsider of the Ballydoyle trio and of the entire field assembled for Newmarket’s G2 Juddmonte Royal Lodge S., Royal Dornoch (Ire) (Gleneagles {Ire}) emerged best to provide Aidan O’Brien with a seventh renewal. Always close to the pace under Wayne Lordan, the 16-1 shot was passed by the 6-5 favourite Kameko (Kitten’s Joy) with 2 1/2 furlongs remaining but stayed in the fight and eventually ground down that rival in the shade of the post. At the line, the bay who had been third in the G2 Richmond S. at Goodwood Aug. 1 but seventh in the Aug. 18 G1 Prix Morny at Deauville and last of five in the G2 Champagne S. at Doncaster Sept. 14 had a neck to spare, setting a new juvenile track record with a strong tailwind to aid him. One of Ballydoyle’s other colts Iberia (Ire) (Galileo {Ire}) was 1 1/2 lengths away in third. “He has pace, but we always felt that he wanted a mile and he’s a very straightforward colt,” Lordan said. “He had to dig deep and came up to the line well.”

Royal Dornoch is an unusual Royal Lodge winner, having been campaigned over six furlongs for his first four starts beginning with a distant 11th placing at The Curragh June 28. Showing the kind of marked improvement that the stable is renowned for generating when runner-up at Fairyhouse just three weeks later, he was 25-1 when third behind Golden Horde (Ire) (Lethal Force {Ire}) and Threat (Ire) (Footstepsinthesand {GB}) in the Richmond and was having his last run over six when eight-lengths seventh in the Morny. Given the chance to break his duck over seven furlongs in a Gowran Park maiden Sept. 4, he accomplished the landmark in gutsy fashion before his underwhelming effort in the Champagne a fortnight ago.

“He’s a lovely horse and the fact that he was able to race in top company over six furlongs and do the same over a mile makes him exciting,” Aidan O’Brien commented. “He’s like all the Gleneagles–they have speed and are very tough and genuine. Wayne said that when he got past the favourite he felt he had plenty left and you love to hear the jockey saying that. He is a horse that has worked like a good horse, but he has taken a bit of time to win his maiden. He ran a big race in the Richmond over six furlongs for a horse that we felt that was going to stay. He hasn’t been protected in any way, he has had plenty of racing and been pitched in there all the time and he has never disappointed us yet.”

“Donnacha [O’Brien] had said from a very early stage that he wanted seven or a mile, even though I kept running him short,” his trainer added. “Padraig [Beggy] rode him the last day and he said the same, that he would be comfortable at a mile. He gets the mile well and he will probably get a mile and a quarter–whether he gets a mile and a half, I don’t know. Usually when those horses start that short they don’t get a mile and half, but that doesn’t say he won’t as he is by Gleneagles who is by Galileo and we know anything can happen with them.”

The G1 Vertem Futurity Trophy at Doncaster Oct. 26 could be on the winner’s agenda now. “It is very possible we could consider that, it depends what else we have going forward. Horses change a lot at this time of year and they come and go very quickly.” Kameko’s trainer Andrew Balding said of the runner-up, “I was very pleased with the run and he is only a horse having his third run. He is going to keep on improving and is a lovely horse to have in the yard. He seemed to handle the track fine.”

Royal Dornoch is a half-brother to the five times group-winning Hawksmoor (Ire) (Azamour {Ire}, whose red-letter days came in the GII New York S. and G2 German 1000 Guineas and who was also runner-up in the GI First Lady S. and GI Matriarch S. and third in the G1 Fillies’ Mile. Two other of his half-sisters Magical Fire (Ire) (Dragon Pulse {Ire}) and Qatar Princess (Ire) (Marju {Ire}) also achieved notoriety, with the former having finished second in the G2 Duchess of Cambridge S. and the latter being the dam of this year’s Listed Prix de la Vallee d’Auge scorer and G3 Prix d’Arenberg third Flaming Princess (Ire) (Hot Steak {Ire}).