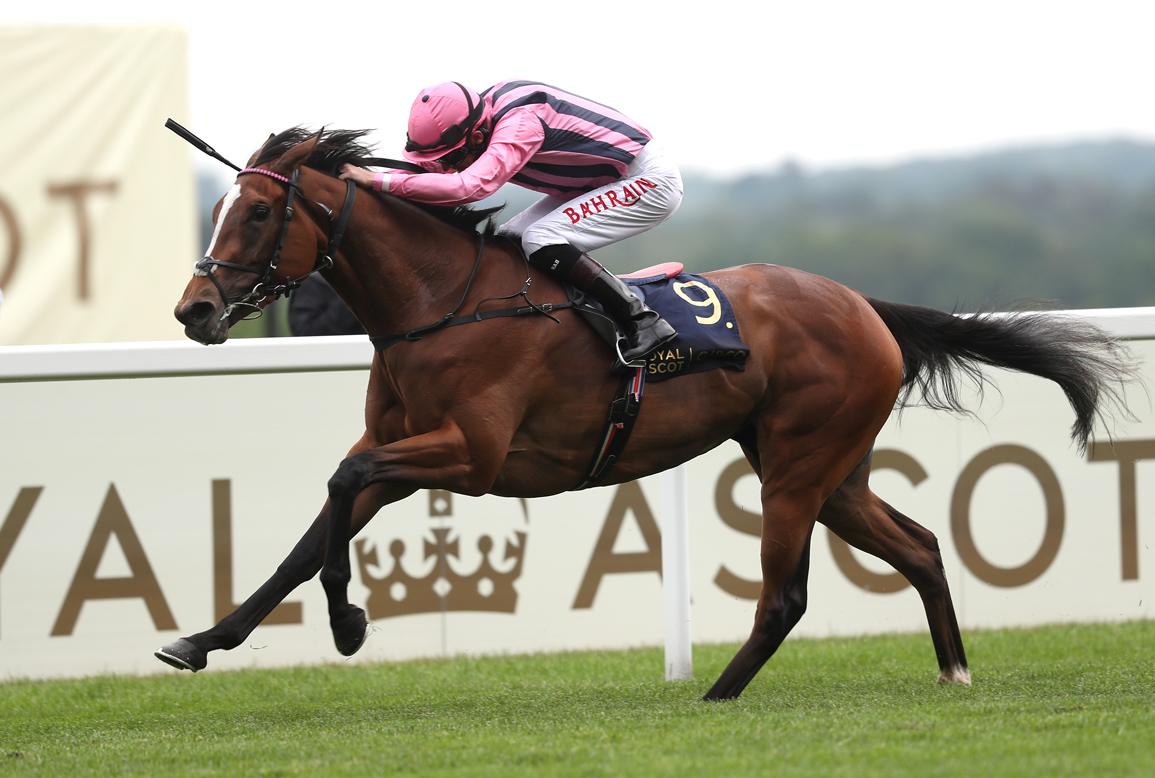 Passed over by Frankie Dettori and one of the outsiders for Thursday's G2 Ribblesdale S., Loving Dream (GB) (Gleneagles {Ire}) who carries the colours of Trevor Harris's Lordship Stud nevertheless held the John and Thady Gosden stable's bragging rights as she showed admirable toughness to upgrade her profile. Sent forward from her wide draw by Robert Havlin and avoiding the scrimmaging between keen-going fillies toward the rail as a result, the 18-1 shot stayed out of trouble tracking the leader Dubai Fountain (Ire) (Teofilo {Ire}) throughout the early stages. Committed at the top of the straight, the homebred who had been fifth in the May 8 Listed Lingfield Oaks Trial kept finding to score by 3/4 of a length from Shadwell's Eshaada (GB) (Muhaarar {GB}), with Nicest (Ire) (American Pharoah) 1 3/4 lengths away in third. “She's a filly who likes to use her stride and so I committed to going forward,” explained Havlin, whose only prior Royal Ascot winner had come on the sire-of-the-moment Ardad (Ire) in the Listed Windsor Castle S. in 2016. We got a nice breather at the bottom of the hill and quickened from the four to the three and she kept finding and finding. It was a very gutsy performance.”

Off the mark on her second start over an extended mile on Wolverhampton's Tapeta in December, Loving Dream was sent to the same 10-furlong Wetherby novice Apr. 25 that the stable's eventual G2 Hardwicke S. winner Fanny Logan (Ire) (Sea the Stars {Ire}) had won two years earlier. No match for TDN Rising Star Noon Star (Galileo {Ire}) when second to that Juddmonte blueblood there, the bay had Sherbet Lemon (Lemon Drop Kid) back in fourth but was unable to land a blow on the latter when fifth in the May 8 Listed Lingfield Oaks Trial on soft ground. Bypassing the Oaks, she avoided the drubbing suffered by the likes of Divinely (Ire) (Galileo {Ire}) and Dubai Fountain (Ire) (Teofilo {Ire}) and may have benefitted as a result as she first saw off the latter on the front end before Eshaada closed in.

“It's great to ride another one, especially for the boss, and the filly has done well,” Havlin added. “I thought she was overpriced on the day and that has been proven to be so. It was soft ground the last day and I felt I was done for a bit of toe at Wetherby and was then keeping on again, so she was flying under the radar a little bit. Luckily we got a nice break and saved plenty for the straight.” John Gosden senior said, “Robert committed early and made best use of her stamina. Eshaada came late, everyone had a go but she's very game and very honest and it was a wonderful positive ride by Robert, it really was. Trevor and Libby [Harris] have been fantastic for the game and they've never given up and to go and win this race is pretty special.”

Loving Dream is a half-sister to the stakes winner and GI American Oaks third Amandine (GB) (Shamardal) out of the smart Kissable (Ire) (Danehill Dancer {Ire}) who also scored at that level in the States having been third in the G1 Moyglare Stud S. Bought for 180,000gns at the 2013 Tattersalls December Mares Sale, she is a daughter of the unbeaten Kitty O'Shea (GB) (Sadler's Wells) who was not seen again after her impressive win in the Listed Park Express S. Also responsible for Danehill Dancer's listed-placed Kingdom of Munster (Ire), she is in turn a full-sister to the St Leger hero Brian Boru (GB) and a half to the multiple group winner Sea Moon (GB) (Beat Hollow {GB}). The G3 Park Hill S.-winning third dam Eva Luna (Alleged) is also the ancestress of the G1 Epsom Derby and G1 Prix de l'Arc de Triomphe-winning European champion Workforce (GB) (King's Best), the G1 Caulfield Cup, G1 Grosser Preis von Baden and G1 Grosser Preis von Berlin-winning champion stayer Best Solution (Ire) (Kodiac {GB}) and the promising 3-year-old filly Petricor (GB) (Frankel {GB}) who was successful in the Listed Prix Finlande and runner-up in the G3 Prix Vanteaux this term. Kissable's unraced 2-year-old filly Five Stars (GB) (Sea the Stars {Ire}) was a 48,000gns purchase by Johnston Racing at the Tattersalls October Yearling Sale Book 2, while she also has a yearling colt by Camelot (GB) and a colt foal also by Sea the Stars.