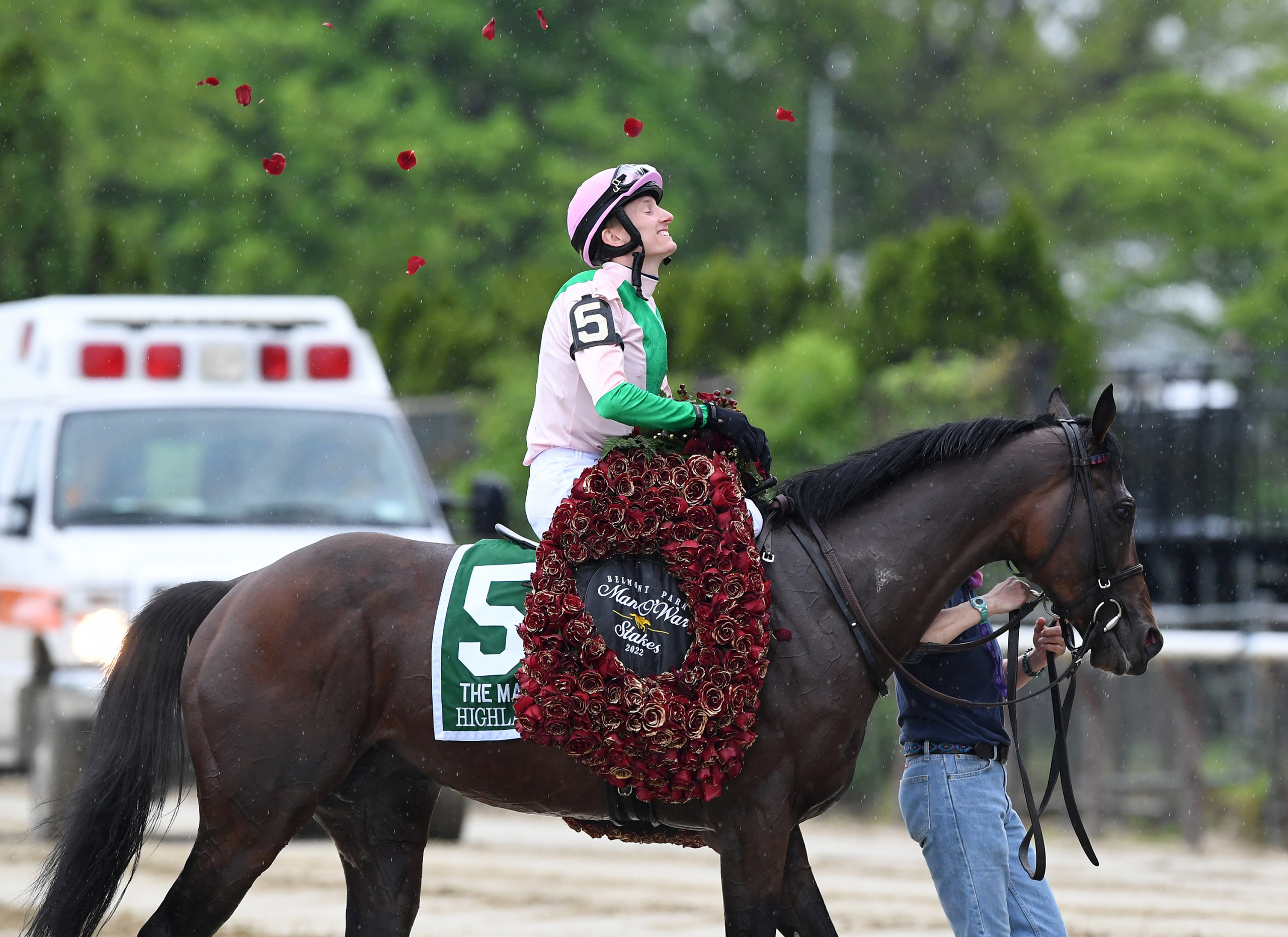 With heavily favored champion Yibir totally missing the start, Saturday's GI Man o' War S. at Belmont was thrown into a state of flux, and longest shot on the board Highland Chief took advantage. Away well himself and with no real pace on, Highland Chief shared early front-running duties with Abaan (Will Take Charge) past the wire for the first time while kept well off the fence by pilot Trevor McCarthy. Content to sit second on the first bend and down the backside through splits of :25.35, :51.84 and 1:17.60, Highland Chief turned the heat back up heading for home as last year's Jockey Club Derby Invitational and GI Breeders' Cup Turf hero Yibir and MGISW Gufo swept up to join the fray. Highland Chief poked a head in front after a mile in 1:42.04, and while it seemed like surely one of his more accomplished foes would come get him when they straightened, the bay kept finding and in fact pulled away slightly in the late stages.

“I wanted to get a good break, that was the most important thing,” said McCarthy, who was celebrating his first win at the highest level. “He broke well last time, but he just got annihilated at the break. Today, he was really handy the whole way for me. The pace was pretty slow, but the whole time he was just carrying me, carrying me, carrying me. At the 5/16 pole I let him go and started to make an early move. I just wanted to get away from the other guys and it sure paid off. He made up a ton of ground the first time he ran in America and got shut off really bad at the break, but he made a good rally.”

“It's a great feeling,” McCarthy said of winning his first Grade I. “To win it for [trainer] Graham [Motion], who has given me so much support in my career, it's really special. My father started riding for Graham and we got to be good friends with them and his family. I started at 15 and worked for Graham. As soon as I started to learn how to ride, I stayed at Fair Hill for three years. I would come in on the weekends and days off of school and ride out for him which was great. I learned so much from him and all his employees there at the time. To win it with so much history with him is great.”

Originally based with Paul Cole in England, Highland Chief was well thought of enough to contest the 2020 G1 Investec Derby, where he finished 10th before a pair of seconds going 1 1/2 miles at the Group level. He made just one start last year, checking in fifth in Epsom's G1 Coronation Cup June 4, and found 8 1/2 panels at Aqueduct too sharp when ninth while making up significant ground late in his Stateside debut Apr. 14.

“In fairness, Alex Cole, the manager for the owners, told me that if he runs back to his European form, he's very competitive with these horses,” said Motion. “He won a race at Ascot. That's not easy to do. Trevor had a strategy–he knew he couldn't leave him too much to do. He broke better today, which made a difference because he wasn't so held back at the start or too much ground to make up. Trevor gave him a great ride. I said to Trevor, 'I can't believe somebody broke slower than we did.”

Of potential future plans, Motion said, “We'd have to think about the [June 11 GI Resorts World] Manhattan, but it was mentioned to go to Europe after this race if he ran well. Originally, they talked about running in the Dubai World Cup and I knew he just wasn't ready for that. [The owners] think very highly of him.”

As for the beaten favorite, trainer Charlie Appleby said, “That's him. He did that here last year. That's his style. He did it [when second in the Mar. 26 G1] Sheema Classic as well. We intentionally did not want him to be as slow out, but his run style is to come off the pace… Unfortunately, we had rain here last night and rain again today and it's just on the slower side of where he likes to hear his feet rattling. For his acceleration, it just blunts it slightly. Take nothing away from the winner, he held decent form back in Europe in his 3-year-old career there and he had to be respected. We ran our race, but in an ideal world if you asked me what I'd like to have had, it would be no rain.”

Appleby said last year's champion turf horse would likely be back in the States for the Aug. 27 GI Sword Dancer S. at Saratoga.

Pedigree Notes:
Highland Chief hails from the first crop of MG1SW miler Gleneagles, who was a distant last in his lone U.S. start when trying the dirt in American Pharoah's GI Breeders' Cup Classic procession. He is one of 10 graded/group winners for the Coolmore Ireland resident.

Montjeu, meanwhile, has 37 Northern Hemisphere graded/group winners as a broodmare sire to go with 17 foaled south of the equator.

The winner's dam was a 400,000gns TATOCT yearling purchase in 2008 by Paul Cole on Hay's behalf, and she helped repay that investment with a score in the 1 1/2-mile G3 Irish Stallion Farms E.B.F. Give Thanks S. in 2011. A half to MGSW/MG1SP Fantasia (GB) (Sadler's Wells)–a Group 3-winning producer herself–and MGSW/MG1SP Western Hymn (GB) (High Chaparral {Ire}), Pink Symphony is a granddaughter of Europe's 1995 champion 2-year-old filly Blue Duster. She has a 2-year-old full-brother to Highland Chief and a yearling filly by Churchill (Ire).