Glass Slippers Makes History For Europe in the Turf Sprint 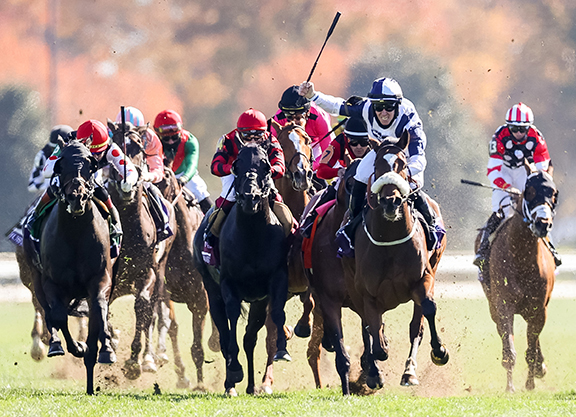 Bearstone Stud's Glass Slippers (GB) (Dream Ahead) became the first European invader to win the GI Breeders' Cup Turf Sprint, weaving her way through traffic to score a late-charging victory at Keeneland Saturday. Sent off at 10-1, the bay filly settled well slightly behind midpack as longshot Into Mystic (Into Mischief) took the field through an opening quarter in :21.26 while prompted by Bombard (War Front) and Texas Wedge (Colonel John). She inched closer along the rail on the turn and cut the corner into the straight and she was shoulder to shoulder with Imprimis (Broken Vow), both ready to strike following a half in :43.81. While Imprimis's lane was abruptly closed off by Leinster (Majestic Warrior), Glass Slippers found a seam and charged to daylight before holding off the late-closing Wet Your Whistle (Stroll). Leinster, favored at 4-1, settled for third after racing prominently throughout.

Glass Slipper is the fourth female to beat the boys in the Turf Sprint.

“What a training performance,” winning rider Tom Eaves said. “She's been great all year, so come to and win it's unreal. She's raced round a bend before, but the plan was to go on the inside and ride for a bit of luck. We had a great run through, which doesn't always work, but it did today. To have a Breeders' Cup winner is amazing and a day I won't forget.”

Of the result, winning trainer Kevin Ryan said, “Awesome. I'm ecstatic. To come and compete against the best sprinters in the world and beat them is just amazing. She's been great all week. Every day getting fresher and cantering on the turf track every morning. I said to Tom earlier in the week, 'Now you're going quicker running into bend let's see how she changes her legs' and straight away no issues at all in the bend. I knew then we were in business. We decided going on a brave ride up the inner and go the shortest route and if it didn't work, such is life. Today was our day.”

Glass Slippers won last year's G1 Prix de l'Abbaye de Longchamp. She opened 2020 with a fifth-place effort in the G1 King's Stand S. at Royal Ascot in June and was second in the July 31 GII King George Qatar S. before winning the Sept. 13 G1 Derrinstown Stud Flying Five S. at The Curragh. She missed by just a neck when second in her defense attempt in the Prix de l'Abbaye last time out Oct. 4.