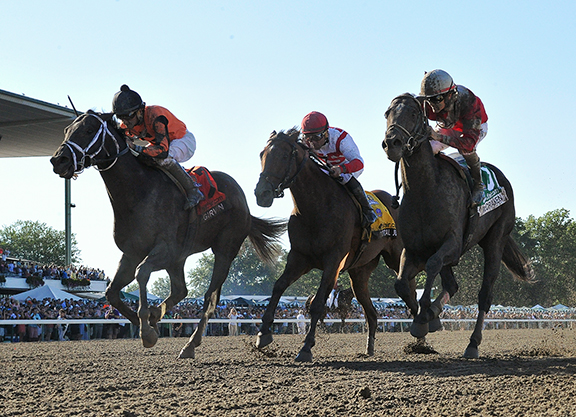 GII Jim Dandy S. at Saratoga, continued its roller-coaster ride at Monmouth Park Sunday as Brad Grady's 9-1 outsider Girvin (Tale of Ekati) just got a desperate nose in front of 7-1 shot McCraken (Ghostzapper) in a thrilling renewal of the

“This is my favorite track,” Grady said from the winner's circle after the Haskell. “Monmouth Park always rolls out the red carpet. The family came, it's a family environment and I just love it.”

With both GI Kentucky Derby winner Always Dreaming (Bodemeister) and GI Preakness S. winner Cloud Computing (Maclean's Music) going down to defeat at Saratoga Saturday, GI Belmont S. runner-up Irish War Cry (Curlin) and newcomer Timeline (Hard Spun), the Haskell's 9-5 favorite off wins in the GIII Peter Pan S. and GIII Pegasus S., were deemed most likely to make an impact at the top of the sophomore division with their efforts at Monmouth Sunday.

Irish War Cry broke sharply and had the lead in the early strides, but the speedy Battle of Midway (Smart Strike) recovered from a slow start and rushed up along the rail to take charge going into the first turn while Girvin was unhurried and trailed the field.

Timeline recovered from an awkward start of his own, and with Irish War Cry a threatening presence on the outside, they were three abreast down the backstretch. Timeline and Battle of Midway continued to press each other after a half in :47.34, with Irish War Cry a half-length back in third and Girvin some 15 lengths behind the pacesetters. Girvin and McCraken began moving in tandem from the back of the pack, but Girvin was forced to steady behind Irish War Cry as McCraken found clear sailing outside. McCraken inhaled the pacesetters four wide into the stretch after three-quarters in 1:11.25 and he looked a winner with a furlong to run, but Girvin and Practical Joke had found clear running room and were gaining on the leader with every stride. Girvin was ultimately moving best of all and just got his nose in front on the wire.

“McCraken got the jump on me and kept me inside, but my horse never lost momentum, so I wasn't concerned,” said winning rider Robby Albarado. “He's really coming into his own right now. I worked him last week up at the Spa and he was sharp. He showed that today. When he got in the clear in the stretch he just kept coming and coming. I was so impressed with what he did today and I think he's just going to get better and better.”

Albarado was winning Monmouth Park's signature race for the first time after some noteworthy close finishes. He was third behind Any Given Saturday and Hard Spun while riding Curlin in 2007 and was just edged by Point Given while riding Touch Tone in 2001.

“I've gotten beat in this race too many times, it's great to finally win it,” Albarado said. “Point Given got me at the wire and then I had Curlin. This is wonderful.”

The remarkably consistent Girvin was a maiden winner at first asking at Fair Grounds last December. Second over the turf in the Keith Gee Memorial S. in February, he became a contender in the sophomore division with a win in the Feb. 25 GII Risen Star S. and assured himself a spot in the GI Kentucky Derby with a 1 1/4-length victory over Patch (Union Rags) in the Apr. 1 GII Louisiana Derby. The dark bay colt suffered the lone off-the-board finish of his career when a troubled 13th in Louisville. He just got nipped by Irap (Tiznow) on the line in the June 24 GIII Ohio Derby last time out and that result was flattered when Irap returned to be a five-length winner of the July 15 GIII Indiana Derby.

“We talked after the Derby and we thought it was right by Girvin to give him a freshening,” said winning trainer Joe Sharp. “We thought the Ohio Derby was a good spot for him and it was close to home. From his effort there, we thought he deserved a shot in the Haskell and a Grade I. He was such a confident horse today.”

As for where the Haskell winner could start next, Sharp added, “Well, I'll talk to Brad and we'll see how Girvin comes out of it, but the timing for the [Aug. 26 GI] Travers is good. At this point, he has done everything we have asked him to do. With the 'Win and You're In' to the [Breeders' Cup] Classic, the question with that is can he get the mile and a quarter. It would be most fitting based on his running style. They are all options and with our barn, we'll ship anywhere. There is no telling where he will end up.”

Girvin was purchased as a pinhooking prospect by Brad Grady for $130,000 at the Fasig-Tipton October last fall, but minor setbacks kept him out of the OBS April and Fasig-Tipton Midlantic sales and the decision was made to retain the youngster to race. Grady's pinhooking operation has been equally successful this year. He topped the OBS April sale with a $2.45-million Tiznow colt he had purchased for $125,000 as a Keeneland September yearling in 2016.

What They're Saying
“He ran great today. Turning for home he put in a huge run and I thought we might have it but he just couldn't hold off that other horse. It just wasn't our day but we have to be so proud of our horse.”
Brian Hernandez aboard runner-up McCraken

“It's a tough beat anytime, especially in a Grade I. I thought the horse got back to where he belongs. He belongs with these horses. That's why I believe in him.”
Ian Wilkes, trainer of McCraken

“He broke sharp and I just let him get into a smooth spot. The trip was perfect in behind three horses. Turning for home, a couple others put in a little stronger run. He ran well but he's probably a little better at a mile.”
Joel Rosario aboard third-place finisher Practical Joke

“I thought he had a good trip. He just didn't finish up. We were going to let the chips fall. I always thought he was ok settling off the pace. I can't offer excuses.”
Graham Motion, trainer of fourth-place finisher Irish War Cry

“When he broke slow out of the gate I knew I had to change all my plans. He's never been in that position before, so I tried to cover up, tried to settle and put him behind horses but he pulled me so hard. At some point I had to let him go.”
Javier Castellano aboard fifth-place finisher Timeline

“He was a little unprepared at the start but I got him to the lead. Around the first time, he drifted out a little bit and from there I was never really able to get his mind on the race.”
Flavien Prat aboard sixth-place finisher Battle of Midway