Giant's Causeway's Vexatious Gets Better of 'Bisou' in Personal Ensign 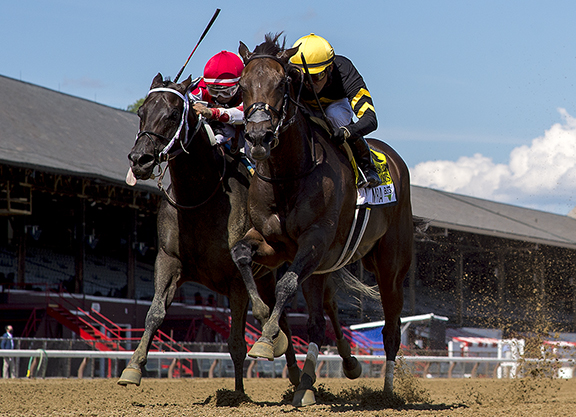 Champion Midnight Bisou (Midnight Lute) was bet like she could not lose Saturday's GI Personal Ensign S. at 1-5, but apparently no one told 9-1 shot Vexatious (Giant's Causeway). The Calumet runner refused to yield to the Eclipse winner in the final furlong of the Saratoga stretch to secure a spot in the starting gate for the GI Breeders' Cup Distaff.

Stakes winner Motion Emotion (Take Charge Indy) went straight to the front with Vexatious stalking in a close-up second and Midnight Bisou just off of them in third through opening splits of :24.15 and :48.36. Vexatious drew even with the pacesetter with three-eighths left to run and that rival called it quits as Midnight Bisou ranged up dangerously on the outside. The Eclipse winner was three-wide turning for home with Vexatious just to her inside as Point of Honor (Curlin) snuck up the fence and looked ready to tussle with the top two. Vexatious came out a bit on the chalk in early stretch, but was quickly righted by pilot Jose Lezcano. Point of Honor swiftly folded her tent on the rail, leaving Vexatious and Midnight Bisou to duke it out to the wire and that they did. The pair stormed clear of the rest of the field in a fierce battle to the finish, but Vexatious was always going the better of the two and held Midnight Bisou at bay for a neck success. There was a stewards' inquiry into the stretch run, as well as a claim of foul by Midnight Bisou's jockey Ricardo Santana, but the result was left as is. It was the first Grade I victory and first win at Saratoga for trainer Jack Sisterson.

“We always thought she had a big win in her and all credit to the filly,” said Sisterson. “I want to say thank you to [owner] Calumet Farm, and my employees for getting her in the best shape possible. We started off the year in allowance races and allowed her to improve, and she deserves it. It's a whole team effort and I have a lot of people to thank.”

He continued, “We'll give her a well-deserved few days off and let her jump ahead a bit. Obviously, it's a Win and You're In.' We'll run her again before the Breeders' Cup and look forward to being home at Keeneland.”

“I had a perfect trip,” said Lezcano. “My filly broke well. She was relaxed the whole way and just sitting behind the leader. I could feel the other filly [Midnight Bisou] coming and I started asking my filly. Every time the other filly came close to her, my filly dug in. I showed her to the other filly and she kept going. She kept running. We could have gone around one more time and I still would have been in front with my filly.”

As for the beaten favorite Midnight Bisou, co-owner Jeff Bloom said, “She ran a huge race. She barely lost the race. She's just a remarkable race mare. I think what happened in the race definitely caused a shift in momentum. Is it disappointing to lose? Of course it is. You want to win all of them. They don't give Grade I races away. You've got to go out there and do it. The filly that beat us is a really nice filly. She ran a huge race last out and is on the upswing, and that's what happens.”

Vexatious last visited the winner's circle when promoted to first via DQ in the 2018 GIII Dowager S. at Keeneland for Neil Drysdale. Transferred to Jack Sisterson last summer, she checked in second in the track-and-trip Summer Colony S. And was off the board in the GI Spinster S. next out. She kicked off 2020 with a fifth in a tough Oaklawn optional claimer Apr. 30 and was third next out in a turf test at Churchill June 6. The 6-year-old was runner-up to another Eclipse winner in Monomoy Girl (Tapizar) in Belmont's GII Ruffian S. July 11.

Vexatious is the 35th Grade I winner for the late Giant's Causeway and is one of the 114 graded winners and 192 stakes winners for the legendary sire. The winner's dam Dream of Summer captured the GI Apple Blossom H. and won over $1.19-million. She took her talent from the racetrack to the breeding shed, producing the likes of Grade I-winning stallion Creative Cause (Giant's Causeway) and MGSW & GISP young sire Destin (Giant's Causeway). The 21-year-old mare is also responsible for the unraced juvenile filly Hippie Cowgirl (Not This Time), who was purchased by Casner Racing for $200,000 at KEESEP. Dream of Summer produced an Uncle Mo filly Jan. 25 of this year and was bred back to Justify.