Giant's Causeway's Bricks and Mortar Reigns Supreme in BC Turf 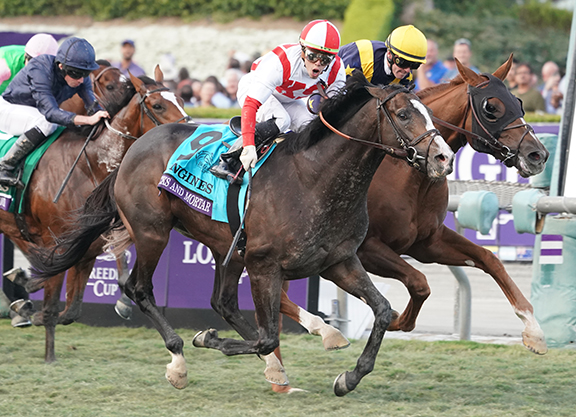 With Mitole (Eskendereya)'s victory in the GI Breeders' Cup Sprint a couple hours earlier and with Midnight Bisou (Midnight Lute) tasting defeat for the first time in 2019 in the GI Breeders' Cup Distaff, the ball was in the court of Bricks and Mortar (Giant's Causeway) as he was looking to complete an unblemished season in Saturday's $4-million GI Longines Breeders' Cup Turf. The task at hand was daunting at face value, as the 5-year-old was trying a mile and a half for the first time against a group of seasoned distance rivals and a couple of European raiders with strong resumes. Sent off the even-money favorite, Bricks and Mortar found clear sailing in the stretch and managed to fight off a stubborn United for the victory, leading home a 1-2 finish for his late stallion, himself runner-up in the 2000 GI Breeders' Cup Classic when trying the dirt for the first time. Anthony Van Dyck (Ire) (Galileo {Ire}), this year's G1 Investec Derby hero, ran on for third.

Bricks and Mortar jumped without incident and took up a midfield position, racing between the rail-skimming United and Channel Maker (English Channel) as Acclimate (Acclamation) took them through the opening half-mile in a sensible :48.44. Tracking Bandua (The Factor) through down the backstretch while still racing inside of chief market rival Old Persian (GB) (Dubawi {Ire}) just ahead of mid-division, Bricks and Mortar followed the move of United into the stretch and found clear sailing four off the inside at the three-sixteenths. Producing the same turn of foot that he used to such good effect at shorter trips this season, he collared United inside the final 100 yards and proved narrowly best. Anthony Van Dyck was held up for running room when trying for a gap between Bandua and United outside the eighth pole and stayed on well from there to be third.

“This is a special horse,” said jockey Irad Ortiz, Jr., winning his third Breeders' Cup race of the weekend, with a bigger prize yet to come. “He might be the best I've ever ridden. Today, he was a little keen with me, so we were closer to the pace than normal. So I just tried to get him to relax. When I asked him to run, I looked behind me and saw we were clear. He saw that other horse in front of us and he fought all the way to the wire. I knew it was very close, but I thought we won it. I'm so happy!”

The winner of 10 of his 12 career starts and his last six in a row since returning from a 14-month injury-enforced absence, the $200,000 Keeneland September graduate won the inaugural GI Pegasus World Cup Turf in January and gamely added the GII Muniz Memorial in March despite being forced to race more prominently than is his custom in a race void of any pace. His reliable late turn of speed had since carried him to wins in the GI Old Forester Turf Classic, the GI Manhattan S. and the Aug. 10 GI Arlington Million in which he defeated recent G1 Cox Plate fourth Magic Wand (Ire) (Galileo {Ire}) for the second time this season.

For trainer Chad Brown, it was a first win in the Turf a few races after accepting the trophy for the Mile for the first time. He also won his first Juvenile Turf with Structor (Palace Malice) Friday afternoon and now sits on 15 Breeders' Cup wins, having registered his first in the Juvenile Fillies Turf at Santa Anita in 2008.

“It takes a remarkable team of really talented men and women to hold a horse together like this,” said the former Bobby Frankel protege. “I can't say enough about the individuals who worked with this horse throughout this campaign. Without them we wouldn't be here.

“We just went race to race and when we got through each one it was, 'OK, what are we going to do next? There were a lot of things to decide. A mile and a half, do we run him after the Arlington Million, can I get this horse ready after 13 weeks? I just reached down and talked to Bobby. I have to thank him, too. We found the knowledge. I wouldn't be here right now without Bobby Frankel. He launched me and to get to a training fest like this, you have to go into his textbook and pull out bits and pieces that maybe he used in the past. It certainly helped me today.”

Though many were willing to oppose Bricks and Mortar on his ability to stay the Turf trip, his dam was a French listed winner over a mile and a half and placed in the 12-furlong GIII Bewitch S. in this country. His half-sister Emerald Beech (Maria's Mon) won Saratoga's Waya S. at 12 panels and the GIII Glens Falls S. at a mile and three-eighths.

Furthermore, second dam sire Exceller won the G1 Prix Royal Oak (French St Leger) over 15 furlongs before his repatriation to the U.S. Under the care of Charlie Whittingham, Exceller added the 1977 GI Canadian International S. (then run over a mile and five-eighths) and later defeated Seattle Slew in the GI Jockey Club Gold Cup, at that time a mile-and-a-half race. Stage Door Johnny, sire of Bricks and Mortar's third dam, was victorious in the 1968 Belmont S.

Beyond the Waves is the dam of a Runhappy colt foaled Apr. 24 and was covered by both that sire and Uncle Mo this past breeding season. Bricks and Mortar is the third Breeders' Cup winner for Giant's Causeway, all at Santa Anita (Man of Iron, 2009 Marathon; Take Charge Brandi, 2014 Juvenile Fillies).

Bricks and Mortar enters stud at Shadai Farm in 2020.