Ghostzapper’s Guarana Gets the Distance in CCA Oaks 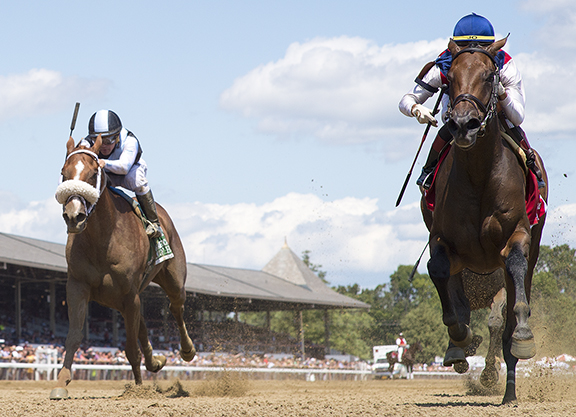 Exhibiting sheer brilliance in her first two outings, ‘TDN Rising Star’ Guarana was more workmanlike Sunday at Saratoga, but got the job done in her two-turn debut with a wire-to-wire success in the GI Coaching Club American Oaks.

Unveiled as a 4-5 favorite Apr. 19 in the Keeneland slop, the Three Chimneys Farm homebred blew her competition away to the tune of a 14 3/4-length romp, easily good enough for ‘Rising Star’ honors. Her rider, Jose Ortiz, made the difficult decision to give up the mount on GI Kentucky Oaks winner Serengeti Empress (Alternation) to ride Guarana in the GI Acorn S., and she rewarded him, tracking a supersonic pace and drawing off in the stretch to a dazzling six-length triumph.

Recording four powerful breezes in the interim, capped by a local half-mile move in :48 3/5 (36/127) July 13, the bay was pounded down to 1-4 favoritism in the CCA, pushed back one day due to Saturday’s heat cancellation, and broke on top from her rail draw. Hugging the rail going into the clubhouse turn as the other four fillies drifted a bit wide, Guarana held a measured half-length advantage over Champagne Anyone (Street Sense) through soft fractions of :24.27 and :49.49. Nudged along a bit as the quintet bunched up through three-quarters in 1:13.58, the big favorite shook loose once set down at the top of the lane. Point of Honor, last behind the slow pace, swung to the center of the track to make her run and started to get to the leader inside the eighth pole. Guarana, despite drifting out briefly from a lefty whip, kept to her task, however, and held sway late from the game runner-up by a length. An owner’s objection was lodged into Guarana’s drifting on behalf of the runner-up, but it was quickly dismissed.

“She handled a mile and an eighth well,” said winning trainer Chad Brown. “I thought she got a really good ride from Jose. Nice, comfortable fractions and had enough to get to the wire. The runner-up ran terrific as well. It was a good horse race. I think she got a little lonely out there towards the wire, but like Jose indicated to me, she was starting to get a little tired. She did overreact to the stick a little bit. It caused her to briefly come out, but she was well clear. I’ll talk to [Three Chimneys Chairman] Mr. [Goncalo] Torrealba and his team about what’s next.”

Guarana is one of 11 Grade I winners for 2004 Horse of the Year Ghostzapper, eight of which are fillies or mares. Her dam, a winner once in seven starts for Phipps Stable and Shug McGaughey, is also responsible for Magic Dance (More Than Ready), who captured the Debutante S. June 29 at Churchill, and a yearling colt by Pioneerof the Nile. Second dam Pleasant Home pulled a 30-1 upset by a remarkable 9 1/2 lengths in the 2005 GI Breeders’ Cup Distaff. That mare is also a full-sister to MGSW/MGISP Country Hideaway, as well as Matlacha Pass, producer of MGISWs Point of Entry (Dynaformer) and Pine Island (Arch). Third dam Our Country Place was an unraced half-sister to champion Sky Beauty (Blushing Groom {Fr}), who captured the CCA Oaks in 1993 as one of eight Grade I victories.