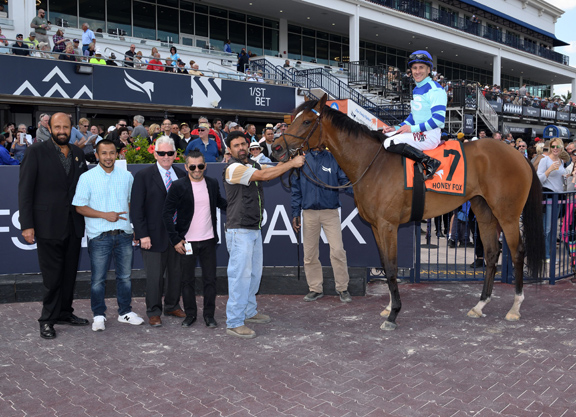 Tom Bush in the winner's circle with Getmotherarose | Coglianese

Nearly a decade ago, Get Stormy (Stormy Atlantic) took longtime breeder Mary Sullivan and trainer Tom Bush on a winner's circle tour of the country, winning three Grade I races and earning over $1.6 million. The 14-year-old stallion is still rewarding the owner/trainer team, most recently with his daughter Getmotherarose's victory in the GIII Honey Fox S. at Gulfstream Park Saturday (video).

“We were obviously thrilled that the filly was able to step up and win a Grade III,” Bush said Monday morning. “She's made steady progress for us ever since she was a 2-year-old, but she's always been kind of an immature, light filly. She is finally filling out and getting a little bit more muscle to her.”

Getmotherarose, a 4-year-old Sullivan homebred, was making her 14th lifetime start Saturday and was stretching out to a mile for the first time in her career following a fourth-place effort in the 7 1/2-furlong South Beach S. at Gulfstream Jan. 25.

“We were ready to stretch her out and she kind of adopted the same style that she had sprinting,” Bush said. “So we were happy to see that. It was a big thrill for Mrs. Sullivan and for everybody.”

Getmotherarose isn't the only Get Stormy competing in stakes company for Bush and Sullivan at Gulfstream this winter. Get Smokin, a 3-year-old gelding purchased for Sullivan by Taproot Bloodstock for $11,000 at the 2018 Fasig-Tipton Kentucky Fall sale, carried her colors to runner-up efforts in the Jan. 4 GIII Kitten's Joy S. and again in the Feb. 1 Dania Beach S.

“We passed on [Saturday's GIII] Palm Beach S. with him because we had two pretty stiff races down here,” Bush explained. “He'll run on Florida Derby day in the mile race they have there on the undercard.”
Not only did Sullivan breed Get Stormy, the Florida-based breeder also co-bred and co-campaigned his broodmare sire, hard-knocking Grade I-winning millionaire Kiri's Clown.

“She's had a lot of the family for a long time,” Bush said. “Get Stormy continues to impact all of us. Phil Hager from Taproot Bloodstock has gone and bought us two very nice Get Stormys at the yearling sales and they've done well, including Get Smokin. We're on the Get Stormy bandwagon, there is no doubt about that.”

Get Stormy, who stands at Crestwood Farm, won the 2011 GI Woodford Reserve Turf Classic S. and GI Maker's Mark Mile, as well as the 2012 GI Gulfstream Park Turf H. and four additional graded events. His best runner to date is superstar filly Got Stormy who beat the boys in last year's GI Fourstardave H. and was second in the GI TVG Breeders' Cup Mile. He has also been represented by the Sullivan-owned, Bush-trained Clyde's Image, second in last year's GI Maker's 46 Mile S.

“His best ones have so far been fillies,” Bush said. “I did have one very nice one, Clyde's Image, who was second in two Grade Is and he was a gelding. They all have good temperaments. He was a very good horse with a good temperament. He was a little aggressive in the stall, but other than that, he was a nice horse to be around and he loved to train.”

Of Get Stormy's offspring, Bush continued, “They are late maturing, like he was. You have got to be patient with them. I've felt like that from the get-go. We've gotten great support from the McLeans at Crestwood. They've treated Mary wonderfully and they are doing a great job with the horse, but his offspring are a little bit immature and his yearlings haven't presented themselves quite as well as we'd like. But we still think there is a chance for that to improve, too, because he is getting a better group of mares now.”

Sullivan hit a home run in the sales ring last fall when selling an Empire Maker colt for $775,000 to SF Racing/Starlight Racing/Madaket at the Keeneland September sale. But she is predominantly what seems to be the fast-diminishing breed-to-race breeder.”

I'm very fortunate,” Bush said of Sullivan. “We've had a nice relationship for over 10 years. She's great to train for because she has patience and there isn't anything she wouldn't do to help a horse. She's always looking out for the best interest of the horse and those are the easiest kind of people to train for.”

He continued, “She has about eight in training now and that's usually around her limit. But we have six babies in the pipeline this year, so we will have to see how they sort out.”

As for where Getmotherarose might start next, Bush said, “I haven't sat down to look at it. I wanted to get by this experiment of stretching her out. We seem to be having some success there now. I have to sit down and map it out for the summer, but she's really come on for us here since November. We're pretty excited about her.”