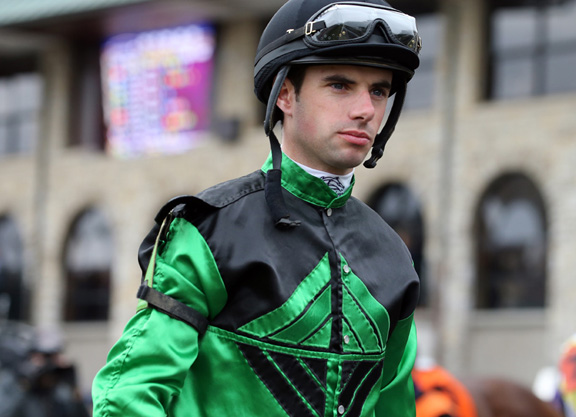 Jockey Florent Geroux has joined a growing list of prominent jockeys who have tested positive for the coronavirus.
Geroux was scheduled to ride Wednesday at Canterbury Park and had to take a test before he would be allowed to ride there. He took the test Monday and came up positive.

“I don't really have any symptoms,” Georux said. “I was a little bit tired Monday, but I had a long week last week. I didn't have any shortness of breath or anything like that.”

Other than Geroux, the jockeys all rode at Los Alamitos and Saez, Garcia, Espinoza and Prat all rode at the Southern California track July 4.

Geroux does not know where and when he got the virus, but speculated that it might have happened Thursday at Keeneland when he dressed in the same room as Saez. Saez took a test Thursday, and when the results came back positive, the next day he was removed from all his mounts after the second race.

Geroux said he has returned home and has begun his quarantine period.

“I'm looking at the bright side of this,” he said. “It could be a lot worse. There are so many people in hospitals with this that are hooked up to respiratory machines.”

Geroux normally rides at Saratoga, but has decided to make Ellis Park his main base of operation for the remainder of the summer.

Saez and Geroux are two examples of riders who have crisscrossed the country of late only to wind up with the coronavirius, raising fears that traveling jockeys may be spreading the virus from track to track. Shortly before his positive test, Saez rode at Belmont, Los Alamitos, Indiana Grand and Keeneland. Prat rode at Del Mar Friday and at Keeneland Saturday. Geroux rode at Keeneland Friday, at Belmont Saturday and back at Keeneland on Sunday and was scheduled to fly out to Canterbury before returning to Ellis Friday.

Some tracks have put rules in place that only regular local jockeys can compete and there is a growing sentiment for more tracks to do the same. Geroux said the main problem with doing that would mean that it could prohibit out-of-town riders from coming in during the week of the GI Kentucky Derby.

“People are saying what about Saratoga, that Kentucky jocks or California jocks should not be allowed to go to Saratoga,” he said. “Maybe not, but what do you for Derby week? Should only the regular jockeys in Kentucky be allowed to ride? We welcomed everybody at Churchill [during the spring meet] and all the jockeys from New York came there to ride. At Keeneland last weekend, all the jockeys from New York came to ride their big horses at Keeneland and no one put a stop on that. So why shouldn't Kentucky and California jockeys be able to ride in Saratoga? If they can't, only the Kentucky colony should be allowed to ride Derby week.”