Georgia On Their Mind–With or Without a Track 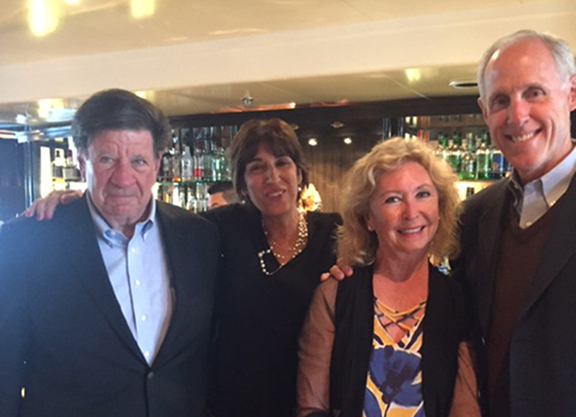 Two of the executive officers of the Georgia Horse Racing Coalition (GHRC) readily acknowledge that the decades-long push to get pari-mutuel wagering legalized in the conservative Peach State once again faces long odds during the 2018 legislative session. Yet the daunting proposition hasn't stopped Tom Schulte and John “Jack” Damico from starting up a small Thoroughbred breeding and racing operation 50 miles north of Atlanta just in case.

The two Georgia-based Thoroughbred boosters have had little difficulty enticing local friends and business acquaintances to buy into the initial partnership shares they offered earlier this year on an auction-acquired crop of three yearlings and two broodmares. Nor, they said, is it hard to sell civic leaders on the visually stunning “racetrack of the future” design the GHRC commissioned from a renowned sports architecture firm that integrates a sleek, modern, horse-racing facility within a bustling, mixed-use, verdant public space.

The stumbling block to getting pari-mutuel laws enacted in Georgia–as it has been for the past 30 years, both Schulte and Damico explained in separate interviews–has nothing to do with a lack of enthusiasm for horses and everything to do with rounding up enough elected officials who are willing to support gambling in a state where moral objections to it run high and religious conservatism carries considerable clout.

“You'd be pleasantly surprised to find out how many people are involved in racing to some degree in Georgia,” said Schulte, who first experienced Thoroughbreds as a Michigan schoolboy in the 1950s when his grandfather owned a string of claimers at Hazel Park and Detroit Race Course. “But in terms of raising Thoroughbreds in Georgia and breeding and whatnot, there are very few of us.”

Schulte, who has lived in Georgia since his family moved there when he was 15, retired last year from four decades in the insurance consulting business and promptly bought 20 acres in the city of Ball Ground (population 1,433) just so he could raise, prep for sales, and race a few Thoroughbreds after owning horses or pieces or partnerships for years. He christened his new home Southern Oak Farm and partnered with Damico in acquiring the operation's initial five bloodstock prospects at the late 2016 and early 2017 Keeneland and Fasig-Tipton sales.

“We wanted a place where I could just play, kind of do it all myself,” Schulte said. “If you're an owner, it's nice to have horses in Lexington or Ocala or wherever. But if you can have them in your backyard, it's a lot more enjoyable.”

Despite the limited stock, auction buyers would be wise not to dismiss Southern Oak Farm as an unfamiliar seller based on how the catalogue pages of some of their future offerings are shaping up.

They own the broodmare Cades Bay (Fusaichi Pegasus), who is the dam of 'TDN Rising Star' Sunset Ridge (Algorithms), the three-for-three filly who headlines Friday's $200,000 Fleet Indian S. for New York-breds at Saratoga Race Course. Cades Bay produced a 2017 First Samurai filly for Southern Oak Farm and has since been bred back to Algorithms. The partnership also owns a Majesticperfection yearling colt whose full-sister, Pretty Perfection, won two stakes races at Gulfstream Park earlier this year.

Damico, a retired partner in a global forensic accounting firm and also a northern transplant to Georgia, has been putting together East Coast racing partnerships for 35 years, primarily under the stable name The Posse.

Damico got his first taste of the sport as teen in Fair Haven, New Jersey, where he worked at a country club near Monmouth Park and two of the regulars he caddied for always had to rush off the links to make first post. Those golfers were Amory Haskell, Monmouth's president, and Eddie Blind, the track's starter. As luck would have it, decades later, Damico was a part-owner of Wayar, who ran fourth in the 1986 Haskell Invitational.

“It's a family affair for us. Our primary love is the racehorse,” Damico said, noting that his family notched its 300th winner earlier this year and that he has introduced about 75 newcomers to the sport over the decades by inviting them into The Posse's partnerships.

Schulte said that when he and Damico met at a local wine tasting 10 years back, neither at first realized that during different tenures, they had both served as past presidents of the Georgia Thoroughbred Owners and Breeders Association. Since then, the GHRC has evolved as the driving entity pushing for a racetrack in the state. Schulte serves as its secretary; Damico is the treasurer.

“It's a political football. It's been frustrating. But we keep trying,” Damico said of the GHRC's goal of bringing racing to metro Atlanta, the largest-populated geographic area in the nation without access to live Thoroughbred racing.

“The closest racetrack is Keeneland, which is six hours away,” Schulte said.

The Keeneland model does, however, offer a blueprint for how the GHRC would like to see a $500-million privately funded track operated in the state, Schulte said.

But Schulte is realistically blunt about how little revenue the state might receive from just two boutique seasonal meets. He said the $15-20 million in annual revenue the GHRC projects is dwarfed by the $500-$600 million that casino companies–which also want to expand into Georgia–are promising the state.

“So we made a decision, whether right or wrong, to kind of join forces with the casinos,” Schulte said. “The GHRC told casino interests 'We will throw our weight behind you, but you've got to include us in your bill.' So if [the state] allows for a casino, they allow for a racetrack. And [the casinos] went for that, because we do have a lot of traction and a lot of good relationships with the legislators.”

This teaming-up strategy, Damico admitted, is not without potential political peril. In 1992, when a pari-mutuel bill was tied to legislation that would start Georgia's first lottery, the then-governor asked pari-mutuel interests for the favor of allowing racetrack betting to be uncoupled from the legislation so the lottery bill could pass unencumbered, with the promise of “we'll take care of you next time,” Damico recounted.

“Big mistake,” Damico said. “Because there was never a next time.”

Or, as Schulte put it, “For years we did it the old-fashioned way. Which is, we would beg [Kentucky and Florida] stallion owners for [donated] seasons. We would sell the seasons. We would raise some money. We would go down to the capitol and we would make donations to the legislators we thought we needed to influence. And we didn't get anywhere.”

Schulte said he understands why Georgia politicians are reluctant to place an emphasis on anything having to do with gambling, which in the past has seemed tantamount to political suicide in a state that is a Christian conservative stronghold.

“If you get a legislator aside at a dinner or something, it's one conversation. You get him in front of a lot of people, it's a different conversation. The private conversations [about Thoroughbred racing] are all encouraging,” Schulte said. “But because there's no demand, [elected officials] are saying 'I'm not going to stick my political neck out for you guys, because there's just no logic in it.' So we have to create demand. And the only way we can think of to create demand is to show some good revenue numbers for the state. We've got to show the state that there's significant revenue in it for you if you legalize pari-mutuel wagering in Georgia.”

Both Damico and Schulte spoke enthusiastically about the GHRC's conceptual racetrack, which is designed to boost the state's bottom line not only by allowing horse racing, but by fostering the growth of other industries, too.

“Our thought was, let's not put a racetrack in the middle of a field surrounded by a parking lot,” Schulte explained. “Let's make this a multi-use development where you have a racetrack that is surrounded, literally 360 degrees, by condos, office buildings, light industry, restaurants, soccer fields, polo fields–things like that. The premise being, it's really more of a park-like setting versus 'I'm going to the track.' The track is part of this whole complex. So I may be in my condo that sits right at the half-mile pole, and I'm sitting out on my deck having morning coffee looking at horses training on the racetrack.”

Which brings us back to the horses themselves–the easiest selling point of the whole deal, the two partners acknowledged.

“Once people are exposed to horse racing, they fall in love. Especially if you can take them to the backside and let them kind of see how it all works,” Schulte said. “Don't just take them to the track for five races then go home. Just kind of let them get inside the whole sport and let them realize it's all about the animal and we're all kind of in this together. If you get people really involved, they latch on.”

That's how it's worked out so far for the first round of Georgia-based partners that Damico recruited to buy into this year's Southern Oak Farm bloodstock initiative.

“Our four other minority partners are having a ball, because they get to see the babies, the yearlings, and the broodmares right here in Georgia,” Damico said. (Schulte added that the two pregnant broodmares will be sent to Kentucky to drop their foals early next year because the “Georgia-bred” designation currently has no catalog-page value in the marketplace. The foals will then return to Georgia to be prepped for sales.).

But if the legislative effort fails to bring a racetrack to Georgia, does Southern Oak Farm have a future in the state?

“Absolutely. We'd like to even grow it a little bit,” Schulte said. “Spending half the day out in the barn taking care of these horses is something I just really enjoy.”