Gelding in 'Inhumane Treatment' Case Settles in at New Home 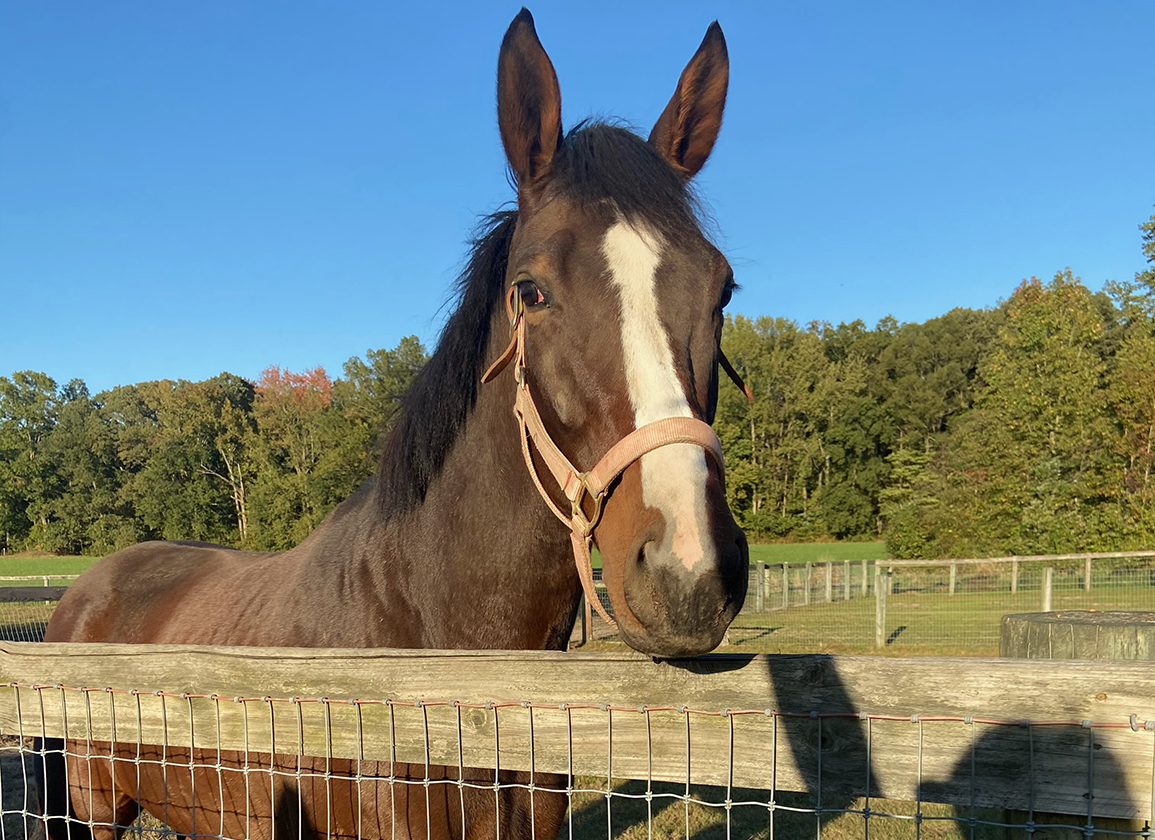 Food and Wine (War Front), the 5-year-old gelding whose mistreatment for a bowed tendon resulted in a trio of “improper or inhumane” care rulings issued by the Delaware Park stewards last Friday, is settling in at his new home, a rehab farm in Townsend, Delaware, that serves as a satellite facility for MidAtlantic Horse Rescue (MAHR).

“He's very, very cool. He's just a real classy horse,” said Beverly Strauss, the co-founder and president of MAHR. “He's in beautiful condition except for his leg. It's just an unfortunate situation and it's really sad, because it looks as if he's got some talent but just ended up on the wrong side of the racetrack.”

Strauss said Food and Wine's owner, Jose Rosales, had asked her for help in trying to get the gelding re-homed earlier this fall by listing him on CANTER, but there were no takers.

“They had called me about taking him a couple of weeks ago, but we've been totally swamped,” Strauss said. “We do the aftercare for Delaware Park and we help with the Beyond the Wire program in Maryland, plus some kill pen horses here and there. So I suggested we list him and see if somebody wanted to rehab him.”

This was in the weeks before Rosales was fined $2,500 and suspended 30 days for ignoring his own veterinarian's recommendation to give Food and Wine up to a year off to heal a bowed tendon, then drugging the gelding in an attempt to mask his lameness from a regulatory veterinarian.

Strauss only learned about that darker side of Food and Wine's recent history last Friday when the Delaware Thoroughbred Racing Commission (DTRC) ruling came out against Rosales.

According to that Oct. 15 ruling, Rosales had administered drugs to mask the gelding's pain from a bowed tendon in order to make it through a workout that Rosales hoped would get Food and Wine removed from the DTRC's restricted list. But Food and Wine went lame at the end of that Oct. 3 breeze, and the Delaware Park stewards launched an investigation into his care based on a tip from a veterinarian.

DTRC executive director Sarah Crane told TDN that as of Oct. 19, no appeals to those rulings had been filed.

“As far as other horses that were in the care of that trainer, it is my understanding that there were not very many, and they have all been transferred out to a different facility,” Crane said. “So there are no horses at Delaware Park under the care of anybody who was listed in those rulings.”

Strauss said that once she learned that Rosales would be leaving Delaware Park immediately because of the ruling against him, she decided that MAHR would just care for the gelding instead of trying to place him through CANTER.

“Now he's in a paddock the size of a double round pen and he's moving around and comfortable,” Straus said. “With bowed tendons, I like to have them moving a little bit. I don't like to have them stuck in a stall. I know everybody rehabs bows differently, but I think it's better for him if he can move around a little bit. We don't have him on Bute now. He'll get it as needed, but he hasn't been on it in the few days since he's been with us. He's very sweet and very nice, and once he rehabs, I think he'll make somebody a really, really nice horse.”

Based in Warwick, Maryland, MAHR is a non-profit, accredited equine aftercare and placement organization with a 158-acre farm along the banks of the Sassafras River. Strauss said that since TDN last profiled MAHR in 2016, the operation has substantially expanded.

“I think when we last spoke we only had one facility,” Strauss said. “Now we've got the main farm and four satellite farms–two that we use for rehab and two for retraining and adoption. We have about 45 horses here at the main farm and close to 90 horses in the program at all times. So we've grown.”