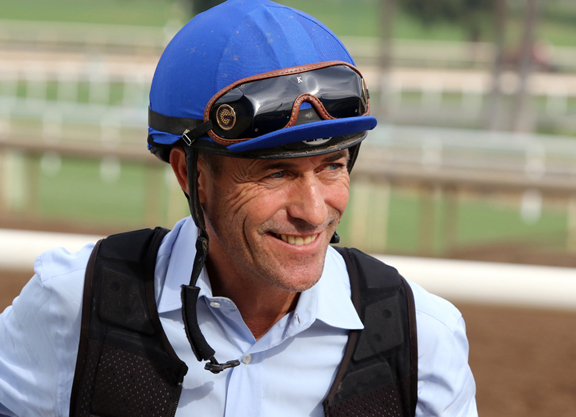 Ever-popular retired Hall of Fame jockey and current television analyst for Fox Sports and the New York Racing Association Gary Stevens joined the TDN Writers' Room presented by Keeneland Tuesday afternoon for an expansive discussion on an array of racing topics and issues. Sitting down with Joe Bianca and Bill Finley as the Green Group Guest of the Week, Stevens gave a huge personal endorsement to star 3-year-old filly Secret Oath (Arrogate) as she prepares to take on males, analyzed the shuffling of the California jockey colony, talked about his role on the acclaimed Fox/NYRA broadcast and much more.

When it comes to Secret Oath, who's undefeated by 23 combined lengths in her last three starts and set to try the boys in the Apr. 2 GI Arkansas Derby, Stevens has a unique perspective. It was he who in 1988 piloted Winning Colors (Caro {Ire}) to only the third win by a filly in the GI Kentucky Derby. Like Secret Oath, Winning Colors was trained by the legendary D. Wayne Lukas, never afraid to try something unconventional with his horses.

“Wayne has never been afraid to jump outside the box, and I think in today's times, with a lot of negativity going on surrounding our industry, this is a feel-good story,” Stevens said. “And Wayne has always been about this sport. He's 100% the best ambassador that we've ever had. People have asked me, 'Is [Secret Oath] anything like Winning Colors?' I actually think from what I'm seeing in the mornings, she may be better than Winning Colors. She's got a different style, she loves to sit off the pace and be a stalker and accelerate. She's got brilliant acceleration for a dirt horse–almost like a turf horse. When she drops [her head] and puts in her kick, she gets it over with in a hurry. Now, granted, she's been running against fillies, but I think there's a lot more in the tank than what we've seen.”

Stevens was later asked about the recent news that Southern California's top two jockeys, Flavien Prat and Umberto Rispoli, would be moving their tack to New York this spring, and whether or not he was surprised.

“No, I wasn't at all,” he said. “I thought that this move would have come a couple of years ago, to be quite honest with you. We've all seen the success Flavien has had when he's traveled to the East Coast. He and Umberto are climbing into what I consider the toughest jockey colony, possibly in the world. But you've got to think about the future, and I'm not going to sugarcoat anything. We see the smaller field sizes in Southern California, and that's one reason I'm in Arkansas right now with Geovanni Franco and Tiago Pereira. They're very good riders who were sixth, seventh on the list of people's choices, and when [tracks] are running shorter fields and multiple trainers have multiple entries in these short fields, it doesn't leave a lot of crumbs for the rest.”

Elsewhere on the show, which is also sponsored by Coolmore, West Point Thoroughbreds, the Pennsylvania Horse Breeders Association, XBTV, Canterbury Park and Legacy Bloodstock, the writers reacted to a Franklin County judge denying Bob Baffert a stay of his suspension, celebrated the drastically improved breakdown record of California tracks, and Finley reads an extraordinary reply to his story on Jorge Navarro starting his prison sentence.. Click here to watch the podcast; click here for the audio-only version.